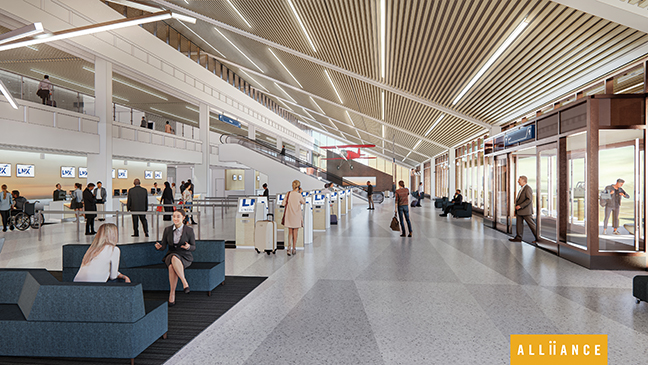 The LNK NEXT project will modernize the 50-year-old terminal, adding two gates, growing capacity and leaving room for further expansion in the future.

A year from now, Lincoln’s airport will look a whole lot different.

Construction began this spring for the LNK Next project, sweeping renovations to the Lincoln Airport (LNK) that will transform the 50-year-old terminal into a larger, modernized space.

The construction will update amenities in the terminal, add two new gates to expand airport capacity, leave room for additional expansion and add infrastructure to allow TSA to run full pre-checks. The renovation will also relocate the ticket counters to the first floor and allow for food-and-beverage service—including the Flyers Club—beyond security. LNK Next will expand the north side of the terminal, consolidating airline gates and adding roughly 35,000 square feet to the existing 58,000-square-foot building.

Since the terminal was designed in 1974, its split-use, disconnected layout has required two fully staffed security checkpoints and two separate checked-baggage facilities. The new design will put the airline ticket counters in the departure-flight area to enhance passenger flow and simplify future expansion. Baggage claim and rental-car counters will also be repositioned to enhance traffic on the first level. Consolidating checkpoints and bag-screening facilities will add efficiency to the passenger experience through minimized bag movement and reduction in the number of times personnel would have to be split up.

The renovation will correct design issues, smooth travelers’ in-terminal experience and, ultimately, create an airport Lincoln can be proud of.

“We are so excited to bring Lincoln an updated airport befitting of our thriving and growing community,” said Dave Haring, A.A.E., executive director of the Lincoln Airport Authority. “The LNK Next renovation will create great opportunities for our city.”

The Lincoln Airport is an economic engine for the local area, creating nearly 9,000 jobs and over $1.3 billion in economic impact on an annual basis. Increasing the use of Lincoln Airport would in turn increase the availability of flights out of Lincoln. With a new, revamped terminal, LNK hopes to see greater use and a greater experience from flying locally.

“One of the best facets of this change for the Lincoln Airport is the opportunity it can bring to our community,” said Rachel Barth, communications director for LNK. “When Lincoln flies locally, we are able to bring more flight options to the city and then make Lincoln a destination for other cities.”

Work on the terminal began this spring and is estimated to take 14-18 months with a target completion date in the second half of 2022.

See renderings and more details about the project at Next.LincolnAirport.com.