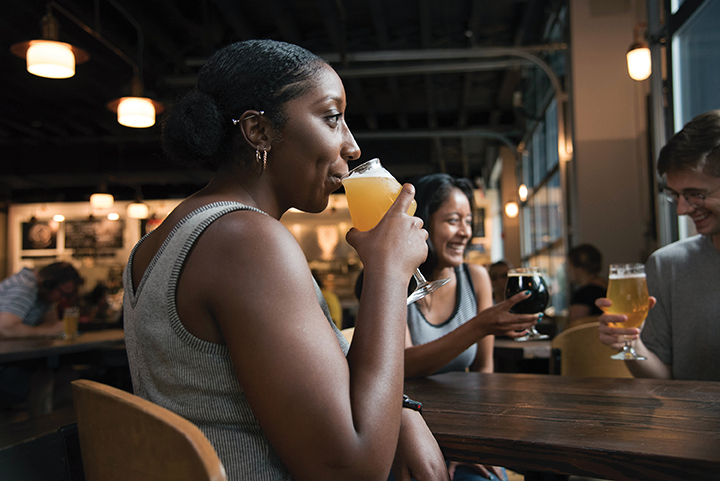 If you’re visiting Lincoln for the first time or haven’t been back in a while, it might surprise you to find out that Lincoln has quite the craft beer scene that is starting rival popular craft beer cities across the country. With a rich history of brewing across the state, Lincoln is pioneering the way for new breweries in Nebraska. With historical breweries like Empyrean Ales in Lazlo’s Brewery and Grill to the popular and nationally recognized breweries Zipline Brewing and Boiler Brewing Company, Lincoln has an amazing beer culture with each brewery crafting their own unique take on beer, food and hospitality.

Lincoln’s breweries brew diverse beers and pay careful attention to creating a memorable experience. Some feature typical taprooms with high top tables, bar snacks, dim lighting and 10+ taps of their latest creations. Others serve their beer in a restaurant style and you can order an appetizer to share or even a full three course meal. Most feature the option for tasting their beers through flights (which I highly recommend) and some have outdoor seating for the warmer months. And as a result of the COVID-19 pandemic, many locations have also increased their outdoor seating and expanded their beer to-go options.

I often get asked, “which brewery is your favorite?” Wearing a a huge smile, I rapid fire back a few questions:

• What do you like in regard to beer styles?

• Who are you with? A buddy, co-workers, extended family, your kids?

Boiler Brewing Company is located downtown near 9th & P in the historic Grand Manse building. This hotspot features small batch beers that are big in diverse flavors. Located in the boiler room of the building Boiler Brewing features plenty of small tables perfect for conversation after work or for hours into the night. With a direct view of the brewing equipment from anywhere in the taproom it makes for a unique experience. If beer isn’t your thing, they feature a select wine list and have wine dispensing machines. Need to take your favorite new beer with you? Ask your bartender and they can help you take your favorite selection on the road. If you can’t make it downtown, Boiler South is just off 56th and Pine Lake Road offers 10+ of their popular beers on tap and it’s conveniently tucked in the Village Garden’s neighborhood.

Empyrean Brewing can be found in the historic Haymarket restaurant Lazlo’s Brewery and Grill. Empyrean’s standard lineup of beers are delicious and are served at both the restaurant and in local grocery stores and with COVID-19 you can get a 6-pack to go. In addition to their standard beers, Empyrean features seasonal and rotating selections in the restaurant, with some guest features from their local home brewers’ competition. One of Lincoln’s gems, Empyreans’ Beer School is an awesome experience. Offered once a month, guests can explore different types of brews with the head brewmaster Rich Chapin and sample five craft beers. But get there early, only the first 150 people make it in.

Ten minutes north of downtown in the Fallbrook area is Schilling Bridge Cork and Tap. Its location provides an escape from downtown and their offerings are great for a date night or a group outing. Between stand out beer, delicious wine flights and some big flavors on their food menu, Shilling Bridge is a perfect neighborhood brewery. If you’re hungry for big flavors or just need a snack to share, a few items featured at Schilling Bridge are crafted with their beer and they are a must try. From the beer bread and beer cheese nachos to the drunken nachos with their Scottish Ale BBQ brisket, you won’t be disappointed! If the time of year is right, Schilling Bridge has a killer outdoor seating area with fire pits and outdoor pizza oven and an even better view of downtown.

If you’re looking for that traditional taproom feel, award winning Zipline Brewing Co. is just that. The taproom features frequent happy hours, monthly brewery tours and to satisfy your appetite some nights they bring in local food trucks. The selection of standard and rotating beers is reason enough to Uber out to Zipline, but their atmosphere seals the deal. Featuring an outdoor area and private conference room, Zipline is a Lincoln must. If you can’t make it to the near downtown brewery, swing by the German style beer hall in southeast Lincoln featuring high ceilings, long community tables and interactive games. If you’re hungry there is a diverse food menu offered by Art & Soul available in the hall via a pass-through window. The beer hall is the perfect post church Sunday hang out.

Next door to the Zipline beer hall in south Lincoln is Catalyst an award-winning brewery and restaurant. Featuring south Lincoln’s largest outdoor patio perfect for conversation and community Catalyst brews beers with a unique twist and pairs them with an outstanding menu. The Blood Orange Lager and the Fried Burger (Fried onions, fried pickles, fried cheese, fried mushrooms, ranch) are a perfect combination. You’ll have plenty of options for drinking and eating and if beer isn’t your thing, barrel-aged cocktails and other drinks are also featured on the menu.

“A better round of beer” Backswing Brewing is owned and brewed by golfers. Inspired by the love of the game, Backswing features nearly a dozen standout beers and a small taproom. Their latest Backspin Apple Wheat Ale is a must-try in the fall. But no matter your style, Backswing is teeing up a beer for you.

If you’re in search of rustic ales with a modern spin White Elm is brewing them in a near downtown neighborhood. Located off 8th and Van Dorn, White Elm’s taproom is modern with an industrial flare and its tap handles feature American and classic Belgian ales, plus seasonal and guest taps. Their recently opened Haymarket location nearly 15 beers available in the heart of downtown Lincoln.

Code Beer, on the corner of Antelope Valley Parkway and N Street in the telegraph district, is an escape from the downtown ruckus and a great place to meet up with a small group of friends. Their beer selection usually consists of 12 beers on tap ranging from Cream Ales and IPAs to Milk Stouts and Passion Fruit Sours. I highly recommend the Cream Ale. This Nebraska-grown ale has a hint of corn (from flaked corn) and it’s definitely something special! While Code Beer doesn’t serve food on-site guests can bring their own food in. With so many take-out and delivery places near downtown, Code Beer is a perfect bar stop for takeout a flight of unique beers all before heading back to your hotel.

My favorite Broken Bow, Nebraska brewery, Kinkaider Brewing Co. is serving up in Lincoln’s Haymarket. Kinkaider’s brewing style features small-batch beer and they often use ingredients fresh from their farm including chokecherries, jalapenos, pumpkins, corn and Nebraska hops. From beer on tap to snacks and special events, Kinkaider has transplanted their hospitality from the Sandhills to the Haymarket giving us all another place to try. Their train station patio and concert series makes it an ideal beer garden destination on the weekends.

Cosmic Eye Brewing in east Lincoln at 8600 P Street is a locally owned and operated brewery featuring 20+ beers on tap that play off their cosmic theme. The space features long family style tables and benches made from local trees from a farm near Fairbury, Nebraska, perfect for groups. The brewery also features a few cozy areas with chairs and couches and if you’re competitive, you can take a round at the shuffleboard tables. The “kids room” with tables, books and coloring supplies makes Cosmic Eye a space for the entire family. I’ve found Cosmic Eye to be great for an afternoon spending time with friends or for special occasions. As mentioned, you can easily make reservations for your event, the brewery includes a small private room or you can reserve tables in the main taproom. Both options allow you to bring in your favorite food or have it catered. Parking is ample at Cosmic Eye, look for the EYE, you won’t regret it.

Lincoln’s newest brewery and taproom founded by two college friends who were scattered across the country during military service and lovingly nicknamed Lincoln (where they met) the “Corn Coast” is Corn Coast Brewing at 1433 Dahlberg Drive. These two college roommates have elevated their home brewing dreams into a business brewing on a small 5BBL brewing system, allowing them to constantly try new flavors, recipes and tinker to give us something new to come back and try.

Whether you’re in town for a work, pleasure or just visiting family the Lincoln beer scene is definitely something to explore, enjoy and maybe even write home about! And if you’re on Untappd, you’ll have plenty of options to check-in and document your adventures pints to brag to your friends about.