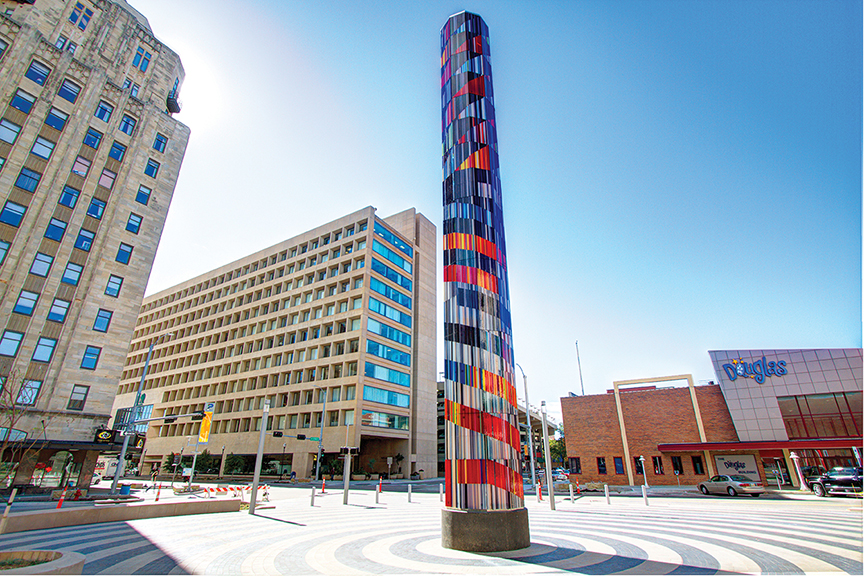 Downtown Lincoln is reinventing itself, welcoming residents and visitors alike with a mixture of restaurants, entertainment, cool niche retail shops and businesses. And the P Street corridor is the heart of the reinvention.

From the Haymarket on the west to Antelope Valley on the east, P Street and its environs are blossoming into an area that is both vibrant and diverse.

Todd Ogden, marketing director for the Downtown Lincoln Association, says the changes to downtown grew out of the 2005 master plan developed by city government and the DLA — with plenty of citizen input.

The latest big splash comes in the form of Tower Square, a civic plaza at 13th and P streets highlighted by a five-story multicolored lighted glass tower by artist Jun Kaneko. Formally known as Lincoln Community Foundation Tower Square in honor of the primary donor, the plaza is a community gathering place and home to outdoor concerts and special events in the heart of downtown.

Ogden calls the plaza an urban living room, made possible by generous donors and a quirk of history: Lincoln was growing in 2009 and 2010 when the rest of the nation was struggling through the recession. As a result, costs for plaza construction came down, and work went ahead sooner than it otherwise might have.

Other goals of the master plan are already established and flourishing. For example, the Haymarket’s Pinnacle Bank Arena opened in summer 2013 and has hosted performers like Elton John, Cher and Pink as well as the thriving University of Nebraska-Lincoln men’s and women’s basketball teams. The annual Chocolate Lovers Fantasy also found a home at the arena, adding taste and smell to the sights and sounds of the shiny new building.

Sprouting and growing around the arena and the rest of the original Haymarket are dozens of restaurants, bars and shops. Many of them surround the Railyard, an outdoor space that becomes an ice rink in winter and is an open gathering place the rest of the year, complete with The Cube, a megascreen that draws crowds of enthusiastic people to watch sports and other major events.

What Ogden calls a “catalyst space,” also part of the original downtown plan, is up and running, too. The 10-story Larson Building at 13th and Q includes shops and restaurants on the street level, topped by six floors of public parking and three floors of apartments. The new Tower Square is in its backyard.

At the east end of the P Street corridor is Union Plaza, a six-acre urban park and the focal point of the Antelope Valley redevelopment project that provides easy access to bike and walking trails. Included in Union Plaza is a 200-seat outdoor amphitheater, murals and fountains.

Underlying all the new development is a plan to adapt downtown Lincoln to changing needs and uses. In the 1950s and ’60s, the city’s downtown core was its epicenter, Ogden says, the place where people went to shop, to work and to be entertained.

But as was true in so many U.S. cities, Lincoln began to grow away from its center in the 1970s and ’80s, and millions of square feet of retail services and a lot of dining and entertainment options moved outward along with the city’s residents.

In the decades since then, the downtown became a “mixed use center,” Ogden says. It became important that Lincoln develop a good urban lifestyle that would attract talented people and maintain the city’s energy.

Dave Landis, director of the Lincoln Office of Urban Development, says a healthy and growing downtown is important for the entire city. “Cities with vibrant downtowns grow up, not out,” he says. That accomplishes two positive goals: It prevents urban sprawl, and it encourages community interaction. People can walk from their homes and workplaces to the city’s entertainment centers.

To help meet that goal, the city and the DLA have focused on making downtown more friendly to pedestrians and bicycles. The new streetscape along P Street from 11th to Centennial Mall is one result. The trees and plantings make the corridor not only appealing but also more environmentally friendly. Many of the new paving materials are permeable, and the design aims to prevent major run-off of water and pollutants during Nebraska rains.

But P Street isn’t finished yet. Ogden says there is more to come. Some sort of “accelerator” – a trolley or a light rail – is in the offing as a way to move people from one end of the corridor to the other.

And other downtown improvements are also in the works. Ogden says work should begin in summer 2015 on a protected bike path on N Street that will take bikers safely through downtown. The path will connect the Salt Creek Levy and Jamaica North trails that run along the west side of the downtown area to the Billy Wolf Trail that angles across Lincoln from the Folsom Children’s Zoo at 27th Street on the north to Holmes Lake at 70th Street on the south end.

Crossing P Street between 14th and 16th is Centennial Mall, seven blocks that connect the state capitol on the south to the UNL campus on the north. Old surfaces are being replaced, new trees, grasses and shrubs are being planted and benches and conversation areas will be featured.

One highlight — in the block between P and Q streets — will be a circle of twinkling lights, each representing one of the Native American tribes that had an influence in Nebraska.

Improvements on the mall are scheduled to be completed in 2016, Ogden says.

P Street is the spine that connects it all: the new and the historic; the university and state government; the Haymarket on the west and Antelope Valley on the east. And the corridor is jammed with all the extras: live theaters, movie theaters, upscale restaurants and more modest eateries, bars that feature live music, specialty shops — and people, taking advantage of it all.