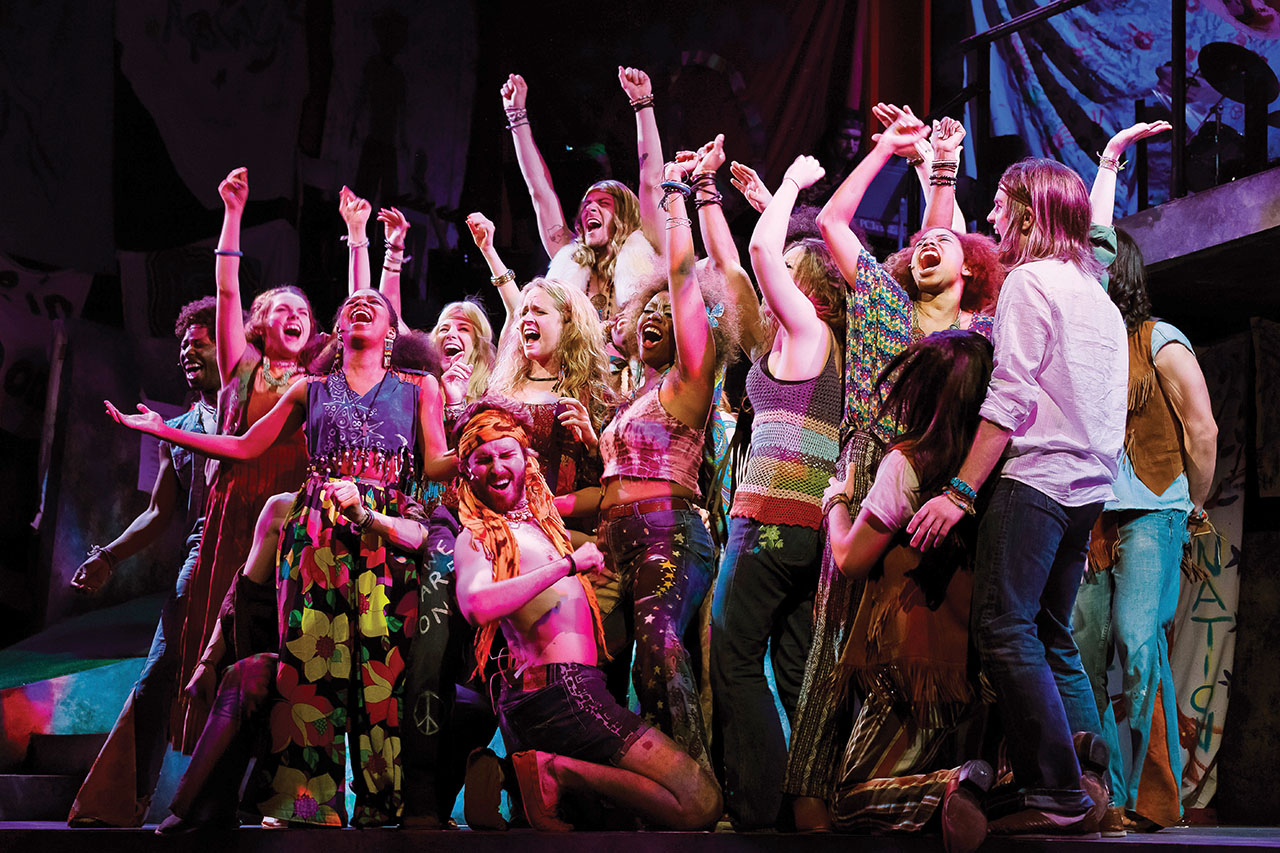 Lincoln Nebraska may not be the first city you think of as a major theatre center, but barely a day goes by without a performance during its very active summer season. From new and unusual works by The Colonel Mustard Amateur Attic Theatre Company founded by a group of friends in order to “put on outrageous plays in the backyard and attic,” to the melodramas at Eugene T. Mahoney State Park and from Flatwater Shakespeare Company’s annual production in the park and a musical in the Oliver T. Joy Theatre at the Lincoln Community Playhouse, Lincoln summer theatre has a plethora of performances.

A long-standing Lincoln tradition, Pinewood Bowl’s July musical has been held annually since 1949 in the lush setting of Pioneers Park. From Gilbert and Sullivan to Rodgers and Hammerstein, Pinewood Bowl’s productions provide toe-tapping entertainment for the entire family. Recent productions include Hairspray, Grease!, The Wizard of Oz and Footloose. You are encouraged to pack your picnic, grab your lawn chair and join the thousands who have enjoyed watching their friends and neighbors perform in Lincoln’s largest open-air venue. Admission is available at the door or can be purchased in advance at any Russ’s Market location. Pioneers Park is located at 3201 South Coddington Street in southwest Lincoln. For the latest information visit www.pinewoodbowl.org.

For forty-six seasons the University of Nebraska–Lincoln’s Nebraska Repertory Theatre (NRT) has produced the latest and greatest scripts to come from Broadway and regional theatres. Employing professional actors, directors and designers, the Nebraska Repertory Theatre is the only theatre in the city under full contract with Actors Equity Association and other national theatre unions. The company members hail from across the country and around the world bringing professional expertise to the production of three shows in rotating repertory. The NRT provides an opportunity to see three productions as diverse as a new adaptation of a Jane Austin classic on Friday night, a brand new comedy not yet published on Saturday night, and an intimate two-person play about growing up on Sunday afternoon, each utilizing the same company of actors. 2014’s season includes Christopher Durang’s popular new comedy Vanya and Sonia and Masha and Spike, Circle Mirror Transformation by Annie Baker and Unnecessary Farce by Paul Slade Smith. Don’t miss Destinations, a series of two “one night only” productions ranging from cabarets to staged readings of new works. Nebraska Repertory Theatre is located in the Temple Building’s Howell and Studio Theatres at 12th and R Streets. Ticket information is available at 402-472-4747 or 800-432-3231. For a complete schedule go to www.unl.edu/rep.

Just a few miles north of Lincoln is another summer tradition, the Mahoney Melodramas. Since 1993, from May to August, families have been treated to a night of booing and throwing popcorn at the villain, and cheering on the heroine, who is always in need of saving. Locals D. Chappelle and John Burkhart, who have made the Denman and Mary Mallory Kountze Memorial Theatre at Eugene T. Mahoney State Park a vacation destination, write many of the melodramas. Take I-80 northeast to exit 426. Before or after the show enjoy fine dining at the Mahoney Grille located in the Peter Keiwit Lodge. Reservations are recommended and may be obtained by calling 402-944-2523 extension 7122. Multiple performance dates are available. For their full schedule, check their website at www.melodrama.net beginning in February.

The Lincoln Community Playhouse, or LCP, as the locals refer to it, is another long-time tradition on Lincoln’s theatre scene. Located at 2500 South 56th Street, LCP presents everything from tried and true musicals such as Spamalot, to theatre for families such as The Little Mermaid. Jr. Summer 2014 includes LCP’s production of the ever popular Oliver!. Executive Director Morrie Enders describes the Playhouse as a place that “help[s] a little mermaid find love, a king find a grail, and an orphan find a home. We’ll experience the love of sisterhood and the somewhat bumpy road to love for a newlywed couple.” They feature free school performances, a senior citizens acting troupe and other outreach activities and classes. To volunteer or to get a schedule, class and ticket information, call 402-489-7529 or go to www.lincolnplayhouse.com.

Children with a passion for performing are in the spotlight at the Haymarket Theatre at 803 Q Street. Their performance projects offer a wide variety of opportunities for young people to participate in rehearsal and perform such characters as Willy Wonka, Frankenstein and Anne Frank. The Haymarket also boasts a series of productions for more mature tastes including pieces by Noel Coward and William Shakespeare. For more information about classes and performances check out their website at www.haymarkettheatre.org or call 402-477-2600.

Speaking of Mr. Shakespeare, for those with a discriminating taste for The Bard and equally entertaining for those who rarely partake, Lincoln’s Flatwater Shakespeare Company is a highlight of the summer theatre scene with an annual production at The Swan Theatre located at WYUKA Cemetery and Memorial Park, 3600 O Street or more recently on a tour of the city parks of Lincoln. From Twelfth Night to Henry V, Bob Hall makes Shakespeare accessible with a company of Lincoln’s most experienced actors, many of whom are members of Actors Equity Association. To enjoy Shakespeare under the stars call 402-484-7640. Flatwater Shakespeare is also dedicated to educating youth with their annual youth production of the same work produced by the adults. For more information about this and other projects of this company, go to www.flatwatershakespeare.org.

If you relish comedies and musical revues, TADA Productions has a season made just for you. TADA is noted for their Midwest premieres of musicals such as Forbidden Broadway and Gilligan’s Island The Musical, as well as a repertory of Dan Goggins’ Nunsense canon. Upcoming productions in 2014 include Chicago, Godspell and Bat Boy, The Musical. For more information, contact 402-438-TADA (8232) or go to www.tadaproductions.info.

The Angels Theatre Company is a group of performing artists who collaborate to create focusing on stories about women. The company commissions many of these works or are new scripts work-shopped with the company. The Angels perform at a variety of venues from the Sheldon Museum of Art and the Lied Center’s Johnny Carson Theater both at 12th and R Streets to churches and community halls and on tour. Productions range from published works such as Las Hermanas Padilla to new works by playwrights within the newly formed Playwright’s Collective. In My Daughter’s Name and What the Wind Taught Me have been the most recent new works that have toured the state of Nebraska. For more information, call 402-474-2206 or go to www.angelscompany.org.

Lincoln’s summer theatre scene has something for everyone. It is a tight-knit community of professionals and amateurs who produce quality theatre and just plain fun. For more information about the performing and visual arts in Lincoln, go to www.artscene.org.