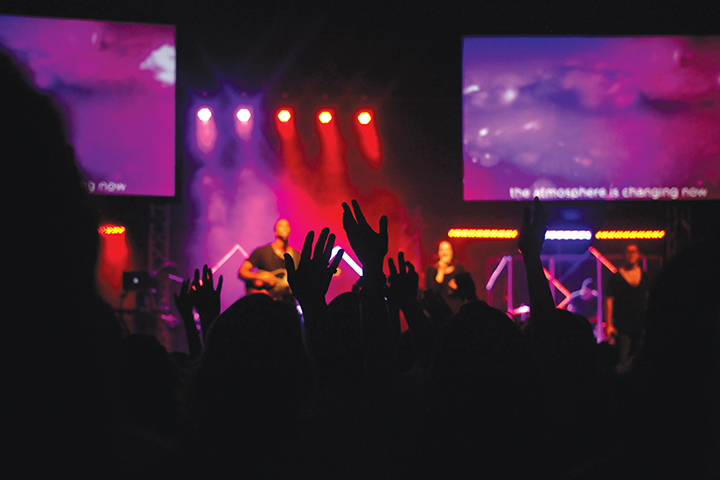 Discovering Nights Out in Lincoln

Nightlife (noun): the activity of people seeking nighttime diversion, as at a nightclub, theater, or the like. Also, the entertainment available to them. (from Dictionary.com)

For many, nightlife means music.

“We’re fortunate now in Lincoln to have multiple spaces for small acts, to big names (like New Kids on the Block, Cardi B, Miranda Lambert, Elton John, Joe Bonamassa and Tenacious D.) who attract thousands to the Pinnacle Bank Arena or Pinewood Bowl,” said Spencer Munson, whose job it is to be plugged into the city’s vibrant music scene as director of Jazz in June and the Lincoln Calling music festival, and as DJ and a concert organizer.

Over a seven-week period in the fall, these and other top venues like Bourbon Theatre, Rococo Theatre, The Royal Grove, The Zoo Bar and Duffy’s hosted performances from 24 artists or bands with recognized names.

The Zoo Bar and Bourbon Theatre have the biggest reputations to live up to on the local club/bar scene.

Patterned after classic Chicago blues clubs, The Zoo has been in the same spot, seemingly unchanged, since 1973. It’s probably good the walls don’t talk, although they are plastered with handbills featuring many of the biggest blues artists to ever play anywhere who left the crowd at The Zoo yelling for more – so maybe the walls do talk. Charlie Musselwhite, Buddy Guy, Robert Cray and Luther Allison have played here, and the club hosts the best in local music as well. With changing demographics, The Zoo also brings jazz, stand-up comedy and roots music to its tiny stage seven nights a week. But the blues is the best, and the contemporary blues artists who play there are no exception. ZooFest, the club’s annual mid-summer anniversary bash attracts large, appreciative crowds when it takes over the street in front of the club at 136 N. 14th St. Mavis Staples, Mike Zito and James Harmon headlined in 2019. To find out who is playing The Zoo and when, see the club’s calendar at zoobar.com.

Just down the street from The Zoo Bar, the vintage marquee in front of the Bourbon Theatre at 1415 O St. announces the next bands to play the updated 1920s-era former movie theater in the heart of downtown. Since opening in 2009, it’s emerged as a club like none other in Lincoln, hosting shows by Stone Temple Pilots, Taj Mahal, Keller Williams, The Bart Crow Band, the Wailers and more. It gives up-and-comers a place to play, too. The venue holds as many as 900 people, often general admission/standing room only, two or more nights a week depending upon the time of year. This past summer, Bourbon was the rain-out location for two of the Tuesday night Jazz in June concerts usually held on the grounds surrounding the University of Nebraska-Lincoln’s Sheldon Art Gallery. And, along with The Zoo, Duffy’s Tavern, Bodega’s Alley and 1867, Bourbon annually hosts the multi-site Lincoln Calling (fall) and Lincoln Exposed (winter) music festivals. Find out who’s playing now and next at bourbontheatre.com.

More than 100 bands call Lincoln home, amazing considering the city’s size. Likely precipitated by the creative students who come here to universities and colleges, Lincoln’s lower cost of living means artists and musicians can work part-time and make their art.

“We also have a lot of music venues that are in close proximity, so artists are able to hop between venues or play to different crowds of folks that patronize them,” said Munson. “Omaha is just up the street, too. We get a lot of creativity that goes back and forth between the two cities.”

Tuesday is Munson’s favorite night to go out. “The Zoo Bar has jazz early and then a couple DJs later who play old soul records. On the weekend, I like listening to live music at Bodega’s Alley or 1867.”

Lincoln’s burgeoning brewery community has not only cross-pollinated into food, but is getting interested in supporting local music, too. Try Kinkaider Brewing Company in the Haymarket or Schillingbridge Cork & Tap House in the northwest part of the city.

Lovers of acoustic music may hear something they’ll appreciate at Crescent Moon Coffee in the Haymarket, Gratitude Café or Mo Java Café in north central Lincoln, Rock-n-Joe Coffee Bar in east Lincoln or other intimate venues around the city. Depending upon the date, you might be able to catch a main stage, house party or backyard concert hosted by The Lincoln Association for Traditional Arts (see lafta.net).

The beautifully restored Rococo Theatre at 140 N. 13th St. hosts concerts throughout the year, just not enough of them. Decibel restrictions make it a perfect stage for world music, jazz, and acoustic performers like Ben Folds, Regina Spektor and Tommy Emmanuel. This year, Rococo is collaborating with the University of Nebraska-Lincoln’s Lied Center for Performing Arts on some events (see liedcenter.org for tickets).

Enjoy free jazz most Monday evenings at Chez SoDo at 440 S. 11th St., brought to you by the Capital Jazz Society. Monthly, the Boiler Brewing Company has partnered with Jazz in June to bring great jazz artists to the historic Boiler Grand Ballroom in the Grand Manse at 129 N. 10th St. Watch for concerts by the Nebraska Jazz Orchestra.

If nightlife to you is a terrific restaurant where you can linger over dinner and wine, try Vincenzo’s RIstorante, DISH Restaurant, The Lodge at Wilderness Ridge, JTK Cuisine & Cocktails, Billy’s, The Oven, The Green Gateau, Venue Restaurant or Sebastian’s Table to name a few.

Cocktails and conversation (and often a great soundtrack)? Try these.

Don’t believe it if some locals tell you there’s nothing to do in Lincoln; they just don’t want to share. But now you know.