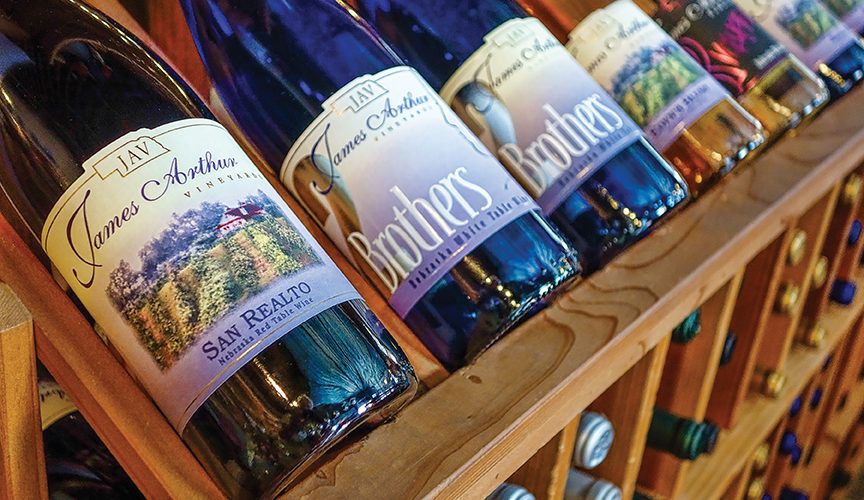 If you ask a non-Nebraskan what the Cornhusker state is known for, you’ll likely hear corn, cows and of course football. However, there is more to the state once known as the Great American desert.

Nebraska has a wonderfully unique history often unfamiliar visitors. It’s home to Arbor Day. It has country’s only unicameral (one-house legislature) and few know the 911 emergency system was developed and first used in Lincoln. It’s where Kool-Aid was invented and home to the largest indoor rainforest—the list goes on. But it’s Nebraska’s thriving grape and wine industry, and it’s interesting history that gets the most quizzical looks.

There was once a flourishing grape industry in the southeast corner of the state. Early settlers brought their favorite fruit trees, vines and other crops with them from the east. Grapevine cuttings were brought to the Nebraska Territory and the first vineyards were started by these early pioneers. A small but successful grape and wine industry was evident by the late 19th century with about 5,000 acres at the turn of the century.

But World War I followed by Prohibition led to the demise of the grape and wine industry in the state. By the time prohibition was repealed in 1933, the country was in the depths of the Great Depression, and in the Midwest dust bowl conditions killed grape industry in Nebraska.

Then in the 1980s the Nebraska Farm Winery Act was passed by the state legislature, creating a renaissance of vineyards and wineries across Nebraska over the past two decades. Nowhere is this more evident than in and around the capital city.

Leading the way was James Arthur Vineyards, now the state’s oldest operating winery. JAV opened their doors in 1997 at their home near Raymond. A pioneer in the Nebraska wine industry, James Arthur Vineyards is still the largest wine producer in the state. Less than 10 minutes from downtown Lincoln, the winery has hosted hundreds of thousands of guests over their 21-year existence, including visitors from every state and as well as international visitors. Surrounded by nearly 20 acres of vineyard, the winery also brings in grapes from nearly a dozen other growers across the state, making their final product truly unique to Nebraska.

In 1992 James Arthur Jeffers’s son-in-law (now JAV’s head winemaker) suggested he grow grapes as an entertaining hobby. Soon the first 100 vines, planted by hand with tender loving care, were firmly secured in the earth. As the number of vines grew, so did the idea of turning the family’s hobby into an actual business, and after careful consideration and research, James Arthur Vineyards was born.

Today, the vineyard has literally grown into the thousands of vines that flourish near the 8,000 square foot tasting room and production facility—surrounded by a panorama of gazebos, waterfalls and beautiful landscaping.

But for the family, it’s not always about award winning wines. James Arthur Vineyards has also earned a reputation for outstanding customer service and a great winery experience through their many events and beautiful grounds. That experience now extends to Lincoln’s Haymarket, with the purchase of the From Nebraska Gift Shop at 8th and Q streets. The winery added a tasting room to the shop which features the best of Nebraska made products. The winery has recently added Nebraska’s first hard cider made from apples from the family orchard.

Started in 2001, Deer Springs Winery is also a family-owned enterprise located in the eastern part of Lincoln. The winery’s roots began as a dream of Jim Partington, retired U.S. Navy Rear Admiral and strike fighter pilot.

After retiring from the Navy and returning to Lincoln, Jim and his wife Barbara built a house on the family homestead. Jim aspired to be “gentleman farmer” and ended up planting some wine grapes, which eventually lead to a tasting room opened in 2007. Guests can enjoy Deer Spring’s finest in the quaint farmhouse, renovated to reflect the charm of the original structure which sits on the land that was deeded to ancestor 1874 by Ulysses S. Grant. The winery is surrounded by pine trees, giving it the peaceful atmosphere of days gone by, while still providing the contemporary comforts.

Partington’s daughter Jennifer Reeder is the winemaker, and has created a plethora of wonderful tasting, award-winning wines that are distinctively Nebraska.

Located at 16255 Adams Street, the winery features live music on the weekends with a bucolic backdrop of unique to any other winery in the state.

When James Arthur Vineyards begin looking for growers in the late 90s, Dale Lillyhorn was one of the first to jump on board. He and his wife Jan thought their 35 acres of land would ideally suited for the task. After establishing his vineyard and selling off his grapes for a number of years to JAV, WindCrest became a reality in 2008, as the Lillyhorns opened their production/tasting room to the public.

Now celebrating 10 yearsn, the winery is open year round. Visitors can sample a wide variety of wines inside or on the patio with a picturesque view of the countryside.

Just south of Lincoln near Roca is Capitol View Winery, a 14 acre property with a tasting room uniquely shaped like an old Nebraska barn.

Capitol View is the newest winery to the Lincoln area, but its roots go a bit deeper. Established in 2017 the vineyard was actually planted in 2004 and the original owners opened a winery in 2009 as WunderRosa Winery.

New owners Les and Trish Meyer bring a unique look and feel to Capitol View Winery and Vineyards. A former professional boxer and a Colorado farm girl, both became Nebraska lobbyists. Their professional backgrounds give personal meaning to the capitol building on their label, and combined with the vineyard’s beautiful vistas of the Lincoln skyline, Capitol View is an ideal name for the winery.

All the grapes used for Capitol View wines come from grapes grown within minutes of the winery, including two and a half acres of estate grown fruit.

Another integral part of the Lincoln winery scene has quite a bit of history in Nebraska winemaking and grape growing. The SchillingBridge Cork & Tap House started operations in Lincoln in 2014. The Cork & Tap House has its roots located in Pawnee City where the SchillingBridge Winery started creating award winning Nebraska wines in 2004. Not long after, Schillingbridge became the nation’s first farm winery/microbrewery combination.

Located at 575 Fallbrook Boulevard, the SchilllingBridge Cork & Tap House offers a variety of hand crafted wines and wine cocktails as well as their craft beers. The patio offers a mesmerizing fire table, stone fire pits and a brick pizza oven, with plenty of searing inside as well. For a truly memorable experience while bridging the gap between the wine connoisseur and the beer enthusiast, the SchillingBridge Cork & Tap House is the place to be.