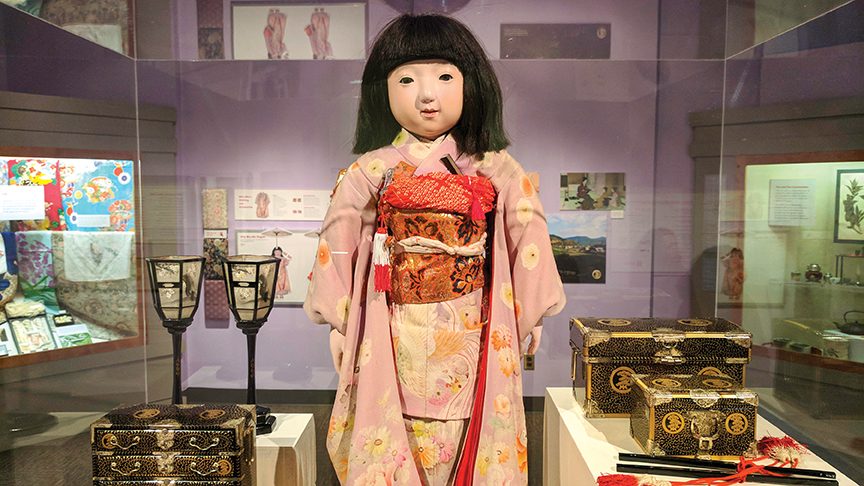 A symbol of friendship, Miss “Miye” Mie has called the University of Nebraska State Museum’s Anthropology collections home since 1928, after the historic friendship doll exchange took place between the youth of Japan and the United States.

She was one of 58 Japanese goodwill ambassador dolls offered to museums in each of the 48 states. The dolls were a gift to the children of the United States given in response to a similar gift project started in 1926 by Dr. Sidney Gulick, a former missionary to Japan. Dr. Gulick had gathered over 12,000 ‘blue-eyed’ dolls from school children all over the United States to send to Japan for the annual Hina Matsuri, or Doll Festival. The dolls were intended to carry a message of goodwill between American and Japanese children during a time of worsening relations between the two nations. The blue-eyed dolls had been received with such enthusiasm that Japanese school girls contributed about a penny each to have Japanese “Torei Ningyo” or Dolls of Friendship made for American children. The dolls were presented in the United States in November 1927. Small groups of the dolls traveled to 479 cities throughout the States over the next year. After the tour, some of the dolls found permanent homes in museums and other institutions throughout the United States, including Nebraska’s State Museum. When the 32-inch Miss Miye doll arrived, her accessories, which consisted of gold and silver inlaid lacquer articles, passport, steamer ticket, and a number of pictures and letters from the Japanese school children were received into the collections.

It was with the arrival of the pictures that the Museum realized it had not received the real Miss Miye. Pictures from the going away party in the Miye Prefecture in Japan showed that the doll on the Miss Miye display stand had a closed mouth. The doll received by the Museum had an open mouth and wore decidedly different clothing. The accessories matched those in the pictures. Miss Shanafelt, museum assistant at the time, noted the Museum had received…“a lovely doll and we are not complaining, but when we send photographs back to this prefecture showing the doll all installed, will the children be disappointed and not be able to understand what has happened?” Miss Bahr replied, “even before the Dolls reached New York, they evidently lost their individual identities by reason of failure to keep the Dolls and their stands together.” The passports and steamship passes that had been slipped into the doll’s kimono sleeves were the only identification they had. There were no markings on the dolls themselves. To compound the error, after their arrival they had visited so many places in so many different groupings, that it was quite impossible to straighten out the mix up. Dr. Gulick advised that the matter of the mouth would most likely not be noticed, but the clothing was so markedly different that perhaps it would be better to use the picture sent from the Miye Prefecture doll in any future correspondence thanking the school children. Miss Miye and many of her accessories were placed on exhibit until the late 1980s.

Friendship doll researcher Michiko Takaoka, Director of The Japanese Cultural Center at Mukogawa Fort Wright Institute in Spokane, Washington, and Special Advisor for Cultural Exchange for the Japanese Agency for Cultural Affairs, published Ningyo Taishi (Doll Ambassadors: An Alternate History of U.S.-Japan Relations) which tells the story of the doll exchange program. She has visited all of the existing dolls from the exchange program. With her help, the original Miss Mie has been located at the St. Joseph Museum in St. Joseph, Missouri. Nebraska’s Friendship Ambassador has not yet been properly identified.

If there is a final determination as to who the doll the Museum has always called Miss Miye is, it can only depend on information found in the original photographs of the dolls. It is believed that pictures from farewell parties Japanese school children gave to the dolls could help determine their true identity. Unfortunately, the original images are in black and white, and to add to the difficulty, many of the doll’s kimonos are of similar design with only a small “mon” or crest to differentiate them. Many of the original images in Japan were destroyed during WWII, and in some cases, accompanying records that were sent with the dolls to their United States homes have also disappeared. The 1927 tour venue is known—perhaps hidden in newspaper archives around the country there are publicity images that would help us track which dolls traveled where and with whom. Nebraska’s little doll ambassador will still carry her message of friendship and goodwill to the future generations of Nebraskans.

As part of an ongoing effort by the University of Nebraska State Museum and the citizens of Mie to continue spreading Miss Mie’s message of peace and understanding, the friendship doll exchange continues.

In 2009, the 83-year-old friendship doll was escorted to her original home in Mie Prefecture, Japan to undergo expert conservation, followed by various homecoming celebrations and exhibitions in 10 cities across the region. More than 30,000 people attended the exhibitions before Miss Mie’s return to Nebraska in 2010.

Most recent, Miss Mie and museum director Susan Weller traveled back to Mie Prefecture in celebration of the 90th anniversary of the Friendship Doll Program. In partnership with the University of Nebraska Kawasaki Reading Room’s 25th anniversary, Lincoln based Morio USA, Nebraska State Historical Society, and with support of the Nebraska Arts Council and the Nebraska Cultural Endowment, the University of Nebraska State Museum temporarily displayed Miss Mie and her accessories at Morrill Hall in late 2017.