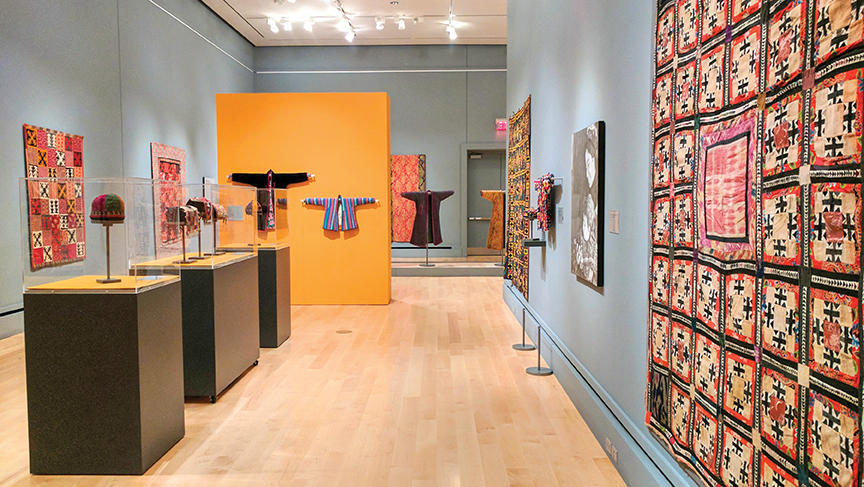 Since opening its doors in 2008, the International Quilt Study Center & Museum has welcomed more than 100,000 visitors from around the world to Quilt House. Located on the University of Nebraska-Lincoln’s East Campus, the museum will celebrate its 10th anniversary with a series of breathtaking and groundbreaking exhibitions to thrill and delight visitors throughout 2018.

“Quilt House has broadened our horizons in big ways,” said Carolyn Ducey, curator of collections. “We keep finding new and unique ways to share quilts with our visitors.”

To kick-off its celebratory year, the museum will host a never-before seen exhibition of quilts from the private collection of Ken Burns. The prolific film-maker and documentarian collects antique American quilts that speak to him through their striking graphic compositions.

“I’ve spent my entire professional life asking this essentially simple question: Who are we?” Burns said in an interview with the museum and NET. “Who are those strange and complicated people who like to call themselves Americans? As an avocation, as a hobby, I have pursued collecting what I think is the cleanest, simplest, and most authentic expression of who we are as a people.”

Featuring more than 30 quilts from his private collection, Uncovered: The Ken Burns Collection will be on display January 19-May 13.

On Feb. 9, Eiko Okano’s Delectable World will feature a selection of her quilts. A leading Japanese quilt artist since the 1990s, Okano has long displayed a predilection for depicting food. Finding beauty in everyday life, she considers her daily meals especially appealing.

These bold, bright and playful quilts will be on display through June 28.

After completing its run at the American Folk Art Museum in New York City, War and Pieced: Soldier Quilts from the Annette Gero Collection will showcase the spectacularly complex geometric quilts made by men using British military and dress uniforms during the Prussian and Napoleonic Wars. In addition to Gero’s quilts, the show will include several from the IQSCM’s collection.

Gero, the leading expert on soldier quilts and a member of the museum’s International Advisory Board, will give a lecture on June 1 to celebrate the show’s opening. War and Pieced will run from May 25 to Sept. 16.

From Sept. 7-Jan. 12, a selection of quilts from Mark Dunn’s private collection will make their Quilt House debut. Dunn, president and owner of Moda Fabrics, is a third-generation thread and yarn salesman. He has become an avid collector of antique and art quilts. His eclectic collecting habits preserve the heritage and future of the textile industry he holds dear.

In 2011, 650 red and white quilts from Joanna Rose’s private collection were displayed at the Park Avenue Armory in New York City. Beginning Sept. 28, her collection of historic orange quilts will appear at Quilt House in Cheddar Quilts from the Joanna Rose Collection. Dating from post-Civil War to the 1940s, this historic collection will brighten the galleries.

Other notable exhibitions during 2018 include:

Made by Hand: American Quilts in the Industrial Age II, Jan. 5-April 29

The museum will finish the year with an exhibition of favorites from the collection selected by Ducey to commemorate her 20 years as curator of the center’s collection.

“It was difficult to select favorites,” she said. “It’s like picking a favorite child.”

Established as a study center in 1997, the collection of about 1,000 quilts donated by Nebraska
natives Ardis and Robert James was stored in a renovated climate-controlled space in the Home Economics Building.

As the collection grew—along with public interest in seeing the quilts—the vision of a museum became a reality when Quilt House opened in 2008. The iconic building housed three galleries and a state-of-the-art on-site storage facility.

“The day we opened and had crowds wrapped around the block was amazing,” Ducey said. “After so many years of needing an exhibition space, it was exciting to finally have it.”

The museum has come a long way since then.

In its first nine years, the center has showcased exhibitions of quilts from as far away as Japan along with some of the finest quilts made in Nebraska and everywhere in between. The collection has expanded to include objects from more than 50 countries. IQSCM exhibitions have traveled to museums and galleries across the U.S. and around the world to China, England, France, Italy and Japan.

With the collection surging to more than 5,000 quilts and growing, the museum opened an expansion in 2015 to double its storage and gallery space.

So far, the response to the museum has been positive. In addition to ranking high on TripAdvisor’s list of Things to Do in Lincoln, in 2017, a USA Today reader survey named the museum one of Nebraska Top 10 Attractions and MSN.com named Quilt House the “coolest building” in Nebraska.

“It shows the committee who chose the design had great vision and saw the museum as a landmark,” Ducey said. “it is as worth of a visit as any of our quilts. It is still a thrill to walk in the door every day.”