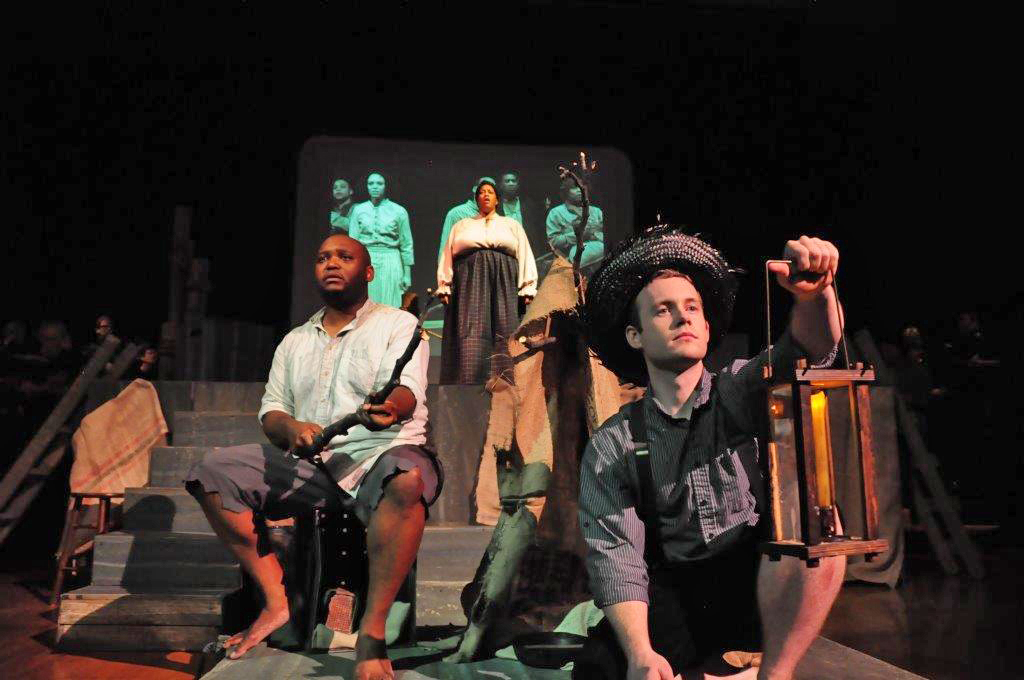 Lincoln is blessed with an abundance of theatrical riches from a Shakespeare company that
travels the city parks to companies with a focus on presenting new and re-conceptualized works. The performance calendar is jam-packed, most weekends filled with multiple possibilities.

‘Do Lincoln’s theatre directors ever talk to each other?’ queried a local reporter. ‘Of course they do,’ was the answer, but until the formation of the Lincoln Theatre Alliance in 2014 not in any formalized way.

The Lincoln Theatre Alliance is comprised of organizations that create theatre within a 40-mile radius of the city. Monthly meetings allow theatre producers to “network, nurture and advocate to promote theatre,” according to the group mission statement. The Alliance provides “a unified voice of the theatre community,” which allows members to work together whether it is to collectively publicize auditions and performances or share unusual and unique costumes and properties.

There are currently fifteen member organizations.

Over the past twenty-plus years small independent theatre companies have added a diversity of programming to Lincoln’s entertainment landscape.

Executive Artistic Director Judith K. Hart said, “Angels Theatre Company is focusing on the literature of the theatre for the 2015-16 season.” The Salon Reading Series held the first Sunday October–December and February–April focuses on plays you probably won’t see produced on Lincoln stages. Free admission includes a post-show discussion. The Angels Playwriting Collective meets monthly to bring “seasoned and new playwrights together to share new work,” said Hart. Members have the opportunity to submit plays for production in the summer First Flight Festival. Information at angelscompany.org or 402-474-2206.

Artistic Director Bob Hall and the Flatwater Shakespeare Company are devoted to providing high-caliber classic theatre experiences. Each June finds Shakespeare in the city’s parks, particularly those in underserved neighborhoods. The Swan at WYUKA is also home to the company. This historic building provides a more traditional setting reminiscent of theatre in Shakespeare’s time. Flatwater incorporates educational components and creates a youth version of each summer production. To see which work of Shakespeare’s canon is currently in production, go to flatwatershakespearecompany.org.

Four years ago, partners Daniel Kubert and Dustin Witte founded OmniArts Nebraska to create works that mesh literature, music, visual art and performance that will deeply explore and illuminate the issues within the piece as they relate to art, artists and humanity universally. Through these works Kubert and Witte hope to enlighten, educate, and inspire empathy and open-heartedness in the community. Kubert who was a principle dancer with the Bill T. Jones/Arnie Zane Dance Company often incorporates dance into the work. Check their website at omniartsnebraska.org for the latest creations. Phone: 402-435-6943.

The TADA Theatre (The Arts Deserve Attention) showcases Nebraska talent through a broad range of musicals and comedies in their intimate 55-seat theatre in Lincoln’s Historic Haymarket. Bob and Cris Rook have produced regional premieres such as Happy Days: A New Musical, The Spidey Project and Gilligan’s Island the Musical and has a history of collaborative projects with local orchestras and the Lied Center for Performing Arts. 2016 productions include Forever Plaid, Don’t Touch That Dial, and Man of LaMancha. Get the schedule at tadaproductions.info or at 402-438-TADA (8232).

The Lincoln area is fortunate to have five community theatres providing opportunities to participate in all facets of the creative process.

Forty miles south of Lincoln is Beatrice’s Community Players, Inc. celebrating forty years of providing a diverse mix of classic shows and new material. 2016 includes Pinkalicious: The Musical, The Ladies Man, and Damn Yankees. Community Players sponsor “Acting Up,” an after school program targeted for students grades 5-8; “Stars of Summer,” a summer theatre program for students aged 5-18; “Young Adult Theatre” for 16-25 year olds and numerous classes and workshops for all ages. For more information: beatricecommunityplayers.com or 402-228-1801.

Lincoln Community Playhouse, in its 70th season, is home to the Oliver T. Joy Mainstage Theatre, the Studio Theatre, and a small gallery space. The Playhouse offers camps and classes that keep youth creative during those “I don’t know what to do with myself” school breaks while the adults take part in every phase of the production process. 2016 shows include lower case, Anne of Green Gables, To Kill A Mockingbird and Catch Me If You Can. Ticket information and volunteer opportunities at lincolnplayhouse.com or call 402-489-7529.

Forty miles east of Lincoln is another ‘community’ near Manley providing Cass County with a unique performance experience. Lofte Community Theatre began life in a large 80-year-old renovated barn and performed there for 29 years until 2006 saw a new post-and-beam style performing arts facility built. The Lofte offers five productions and several special events each season as well as a weeklong children’s theater workshop. Call them at 402-234-2553 or go to lofte.com

A summer tradition since 1949, Pinewood Bowl, Inc. stages a “blockbuster Broadway” musical through the efforts of hundreds of community volunteers. “Lincoln’s only ‘bring-your-own-dinner’ theatre” is geared for the entire family to enjoy. PWB Amphitheatre is located in Pioneers Park at 3201 S. Coddington Ave. in southwest Lincoln. Recent productions include 42nd Street, Shrek The Musical and Hairspray.

2016’s offering is Seussical: The Musical. Advanced tickets can be purchased at all Russ’s Market locations. More info: pinewoodbowl.org or call the producer at 402-540-2094.

The Stage Theater, the most recently created theatre in the Alliance, opened its doors in 2013 in Hickman, NE just fifteen miles south of the city. Productions staged in the 125-seat renovated storefront include small to medium-sized musicals such as Little Women, The Addams Family, Annie, and The Last Five Years. Cabarets and other special events round out their season. To keep up with the latest news: thestagetheater.com or 402-512-1808.

Always keeping their students’ needs at the forefront of their production programs, Nebraska Wesleyan, Southeast Community College and the University of Nebraska-Lincoln’s theatre training includes an abundance of public performances.

The Nebraska Wesleyan University Theatre Department produces twelve mainstage productions and numerous student-directed projects per season. Productions range from Greek tragedy to the latest Broadway musical and the annual favorite, A Christmas Carol. Their 2016 productions will include a celebration of the “400th anniversary of William Shakespeare’s death with a series of shows written or inspired by the Bard.” Visit their current season page at nebrwesleyan.edu/acadmics/academic-departments-and-programs/theatre-department/current-season or call the box office at 402-465-2384.

Southeast Community College’s theatre program, currently residing at the Beatrice campus, is in the process of expanding to production on the Lincoln campus as well. Various classes in theatre production result in collaborations with local theatre companies. Visit southeast.edu/theatredepartment or contact 402-228-8268 for specific details.

The University of Nebraska-Lincoln’s Johnny Carson School of Theatre and Film offers four mainstage and four student-run (Theatrix) productions per season. Mainstage productions span the theatrical canon from Medea to Blithe Spirit to She Kills Monsters with an occasional musical such as The 25th Annual Putnam County Spelling Bee. Theatrix produces more experimental and contemporary issues pieces as well as an annual New Artists Festival showcasing the works of student playwrights. Go to carsonschool.unl.edu or phone the Lied Center Ticket Office at 402-472-4747.

Theatre for Youth (and More)

Adults are not the only ones to feed their creative passions. Lincoln has a wealth of opportunity for youth.

The Haymarket Theatre is a company with two seasons, one for youth and one for adults. The 145-seat performance space houses ten full-length productions, day camps, spring break sessions, and three separate three-week summer performance camps. Haymarket administrators are “dedicated to exposing the community’s youth to a vast array of opportunities that can only be learned through an education and participation in the theatrical arts.” The adult season incorporates work from new cutting-edge playwrights such as Sarah Ruhl with more seasoned playwrights such as Arthur Miller. Find more at haymarkettheatre.org or 402-477-2600.

Theatre Arts for Kids is a musical theatre arts program specifically geared toward the young, aspiring performer interested in learning about, participating in, and producing musical theatre. Basic instruction is supplemented with special workshops in stage combat, performance artistry, improvisation and auditioning. The workshops are fully staged, fully costumed, and fully designed Broadway musicals for ages 6-15 years. Workshops are also available for 3-6 year olds. To see a full list of activities: tafk.org or call 608-322-4549.

Youth Actor’s Academy of Lincoln or YAAL at 5930 South 57th Street is dedicated to creating education and outreach programs [and] producing diverse works of theatre that will speak to all underrepresented and underprivileged youth. A wide variety of theatre classes, workshops and camps are held for all ages, many resulting in performances. Call 402-417-4137 or go to yaal.org for a full list.

For more information about any of these theatres or about the Lincoln Theatre Alliance visit lincolntheatrealliance.org or follow the Facebook page at facebook.com/LincTheatreAlliance.