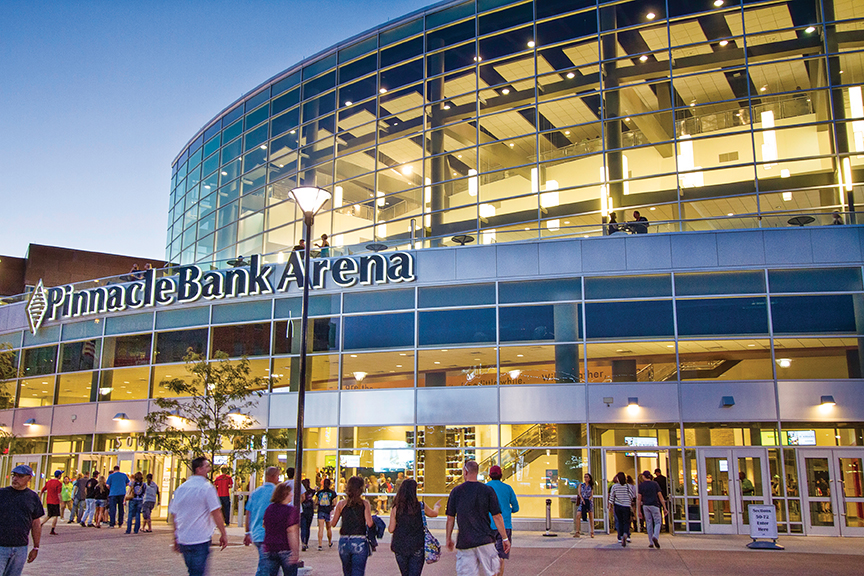 The Pinnacle Bank Arena is the focal point of the West Haymarket area
of downtown Lincoln. The arena is the go-to place for concerts, Nebraska basketball and a variety of events that cater to young and old alike.

Only in its second full year, the arena has racked up a list of well-known entertainers who have graced its stage. Katy Perry, Paul McCartney, Cher, Pink, Jay Z, Justin Bieber and Elton John drew fans from across the country. Rock music fans were treated to Pearl Jam, Fleetwood Mac and Rush. And country fans flocked to see concerts by Jason Aldean, Shania Twain and Kenny Chesney. Motley Crue plays a concert in its final tour at the Arena in 2015.

Country artist Eric Church set a record for attendance at Pinnacle Bank Arena attracting 15,800 fans to his May 2015 concert. The stage was set for 360-degree viewing and a pit area was created for standing room only. The previous mark was set by Elton John in 2013.

Kerri Hiatt, who attended the Kenny Chesney concert in July, said, “The atmosphere feels more intimate. We were able to quickly get in and out of and not stand in long lines.”

The Haymarket is abuzz with people before and after concerts. An abundance of parking allows people to park and walk to the new restaurants and bars.

“For the Kenny Chesney concert, we came early and met friends in the blocked off Canopy Street area and listened to the early bands. We really enjoyed the atmosphere and the ability to meet up with people right near the concert venue,” Hiatt said.

Tom Lorenz, general manager of the Pinnacle Bank Arena, said every time a concert announcement is made, the hotels begin to fill up with both artists and concertgoers.

The arena has spearheaded the downtown Haymarket area development, Lorenz said. An estimated $70-80 million dollars of new hotels, restaurants, apartments and offices now occupy the area and have changed the landscape.

Hudl, a software company, has partnered with Nelnet to build new headquarters in the Haymarket and plans to add 300 jobs over the next three years. Hudl will be the main tenant in the new space. The Bureau of Business Research at the University of Nebraska-Lincoln put the total annual economic impact of the project at $140 million.

The arena is home to the Nebraska Husker men’s basketball games. Nebraska men’s basketball has sold out its first two seasons at the arena. It averaged 15,560 last season, the 10th-highest average among all NCAA schools, and 15,419 in the 2013-14 season.

It is also the site of Nebraska women’s basketball. Nebraska averaged more than 6,000 fans per game at the arena in 2014-2015. And the Pinnacle Bank Arena has provided an excellent home court advantage for the Huskers in their first two seasons in the arena, as the Big Red have a combined 28-5 home record.

But the arena is not just for concertgoers or sports fans. It hosts a variety of conference and family-friendly events throughout the year.

“Even though we aren’t a convention center, per se, we welcome groups, such as the Women of Faith, who returned to the arena for a second year,” Lorenz said. “Ten to 12 thousand women enjoy coming to the arena, and spending time at other attractions around Lincoln.”

The year 2015 brought new events as well as old favorites. Some events that returned were:

Ribfest, held in the festival space north of the arena. The festival space is more than just a parking lot. With power and infrastructure, the area provides an area for festivals and car shows and without closing city streets.

The Pinnacle Bank Arena hosted its first ever NBA game, Chicago Bulls vs. Dallas Mavericks, with the tickets selling out within a few days.

State Games of America, the largest Olympic-style sports festival in the nation, brought 14,000 athletes to Lincoln, many for the first time. Athletes competed in more than 60 sports at the arena as well as sites around Lincoln and Omaha.

“The event is good for Lincoln because it includes athletes of all ages, and it encourages people to be active,” Lorenz said.

The arena also hosts free or low-priced options for families. One popular event is Sharknado and Sharknado 3, a free showing with free popcorn and $2 hot dogs.

“I had people emailing me asking if we were going to do it again,” Lorenz said.

As visitors approach the downtown from the north, they see the ballpark, Memorial Stadium and the Pinnacle Bank Arena, which appear as welcome beacons. Lorenz said it best, “You have the amenities without the hassle of a big city.”

The Pinnacle Bank Arena has added so much glamour and entertainment to our city bringing in legendary performers like Paul McCartney, the Eagles, Katy Perry, and just recently an exhibition basketball game between the Chicago Bulls and the Mavericks. During June 2016 the Ringling Brothers will be showcasing their Circus Xtreme, and in July 2016 Cirque du Soleil will be performing their new show: Toruk.

University of Nebraska Lincoln has many activities and events at the Arena too including all the graduations, men’s and women’s basketball. One of my favorite events happens every Christmas when the People’s City Mission has a Christmas Tree event for all the children in our city, where the entire community can enjoy our beautiful Arena. Make sure you check www.pinnaclebankarena.com to see what’s going on at the Arena.