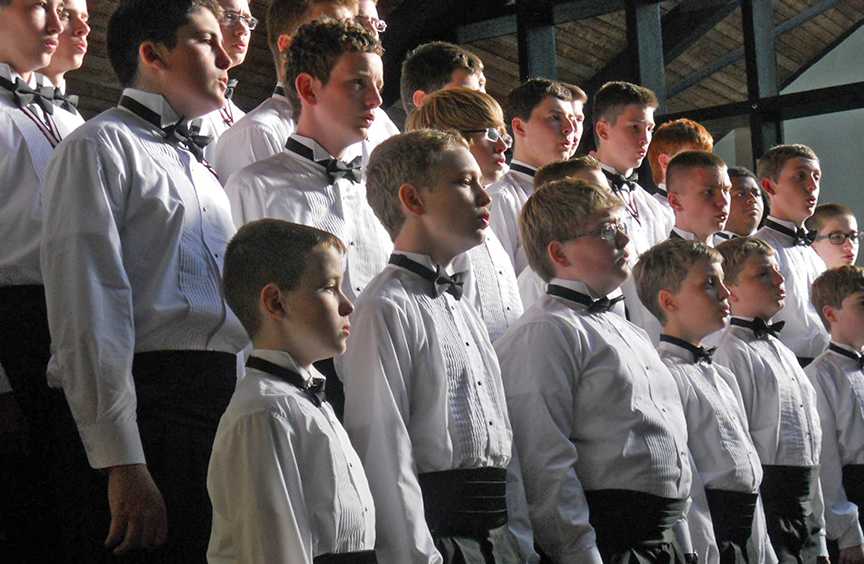 The Lincoln Boys Choir may be based in the Capitol City, but their beautiful voices have been heard around the world.

The Lincoln Boys Choir is a performing group with 120 boys ranging in ages from 8 to 17 in the sixth to 12th grades. Members perform in three groups: the Cantare, Chorale and the Concern Choir, and all three groups rehearse and perform at various events throughout Lincoln, the United States and even Europe.

The Choir was started in 1952 and sponsored by Lincoln Public Schools. A vocal music coordinator wanted to engage boys who could sing, so he held tryouts throughout the city. For about two decades, hundreds of boys sang in the choir before the group went on a hiatus. In 2002, the Scottish Rite Temple, at the suggestion of a former boys choir singer, reinstated the choir, and the Scottish Rite Temple, located at 332 Centennial Mall South, continues to be a space for rehearsals.

The groups’ vision and mission is to promote “healthy, lifetime singing skills through musical performance,” and strive to instill self-confidence and achievement, promote fellowship among boys from different schools and backgrounds and provide education and enrichment opportunities through travel and performance. While most boys might want to be at a basketball court or playground after school, these choir members would rather rehearse Mozart of Bach.

Their hard work has paid off: The groups perform eight to 10 times a semester at events including the Governor’s Inaugural Ball, Capitol Tree Light Ceremony and Lincoln Salt Dogs and Stars games, and in Kansas City, Chicago and New York City.

They have traveled internationally, too. Just four years after it began, the Chorale Choir was one of eight choirs from around the United States chosen in 2006 to perform at the International Mozart Youth Choir Festival in Vienna, Austria. The choir received a formal invitation from Music Celebrations International to perform in the festival, which celebrated the 250th anniversary of Wolfgang Amadeus Mozart.

In 2012 Choir toured and performed in Italy, where during a festival in Rome they participated in a Mass at St. Peter’s Basilica in Vatican City and performed at St. Maria Sopria Minerva. They then went to Florence and performed at St. Stefano Church, then traveled to Venice and sang at San Polo Church with another choir from Pennsylvania. At the end of their nine-day journey they toured Verona. That same year, they held a 60th Alumni Celebration at the Rococo Theater in downtown Lincoln.

Recently, 40 members who were selected from the older choirs traveled to Ireland and performed three concerts. In addition to their performances, the boys, family members and choir staff were able to see the Ring of Kerry, Waterford Crystal factory and multiple castles. The three performances benefited local charities.

Artistic director Burt Schernikau told L Magazine that a favorite performance was St. Carthage’s Cathedral in Lismore. The acoustics were “unbelievable,” he said, and every seat was filled. The choir received a standing ovation.

“It was such a rich musical experience for the boys, and it was a joy to hear the audience talk to the boys afterward and express how happy they were about the sound our choir produced,” he said.

The choirs also consistently win awards and superior ratings in competitions. For its significant contribution to the Lincoln arts community over many years, the group was awarded the Richard Hay Arts Organization Award in 2014. The achievement was part of the 2014 Mayor’s Arts Awards.

Boys audition to be in the choir. The criteria includes singing “America,” voice range and pitch recall, as well as the ability to sing in an unchanged boy’s voice. The boys who show readiness in their music ability, as well as their demeanor, are invited to join and rehearse for the first time at a day-long workshop.

Members are given opportunities for fundraisers to offset costs, and are encouraged to participate in the various car washes and sales. Lack of funds doesn’t prevent any boy from participating, however, the choir manages a fund designed to provide confidential assistance to families in need of financial aid. The choir, which has become a nonprofit entity, is truly a community effort, as it is supported by parent volunteers, committees and a board of directors, who assist with fundraisers, event planning, publicity and chaperoning.

Schernikau has been the artistic director since the choir was reinstated. He graduated from the Nebraska Wesleyan University music department and has a master’s degree from the University of Nebraska-Lincoln in composition and music education. He is the director for the Chorale and Cantare choirs.

Associate Director Kevin Scheele has also been involved with the choir since it started for the second time in 2002. He also graduated from the Nebraska Wesleyan University music department.

In addition to event performances, the choirs perform two concerts of their own each year. In January 2016, the choir will participate in “Concert with a Cause” at Southwood Lutheran Church, 4301 Wilderness Hills Blvd., and perform at Church of the Holy Trinity, 60001 A St., in February. The Spring Day Concert will be held in May at Nebraska Wesleyan University, 5000 St. Paul Ave. Spring auditions will be held in April.

More information about the Lincoln Boys Choir, including a history, event schedule and videos, is available on its website: www.lincolnboyschoir.org or its Facebook page: www.facebook.com/LincolnBoysChoir. Those with more questions or interest can also call (402) 499-4446.