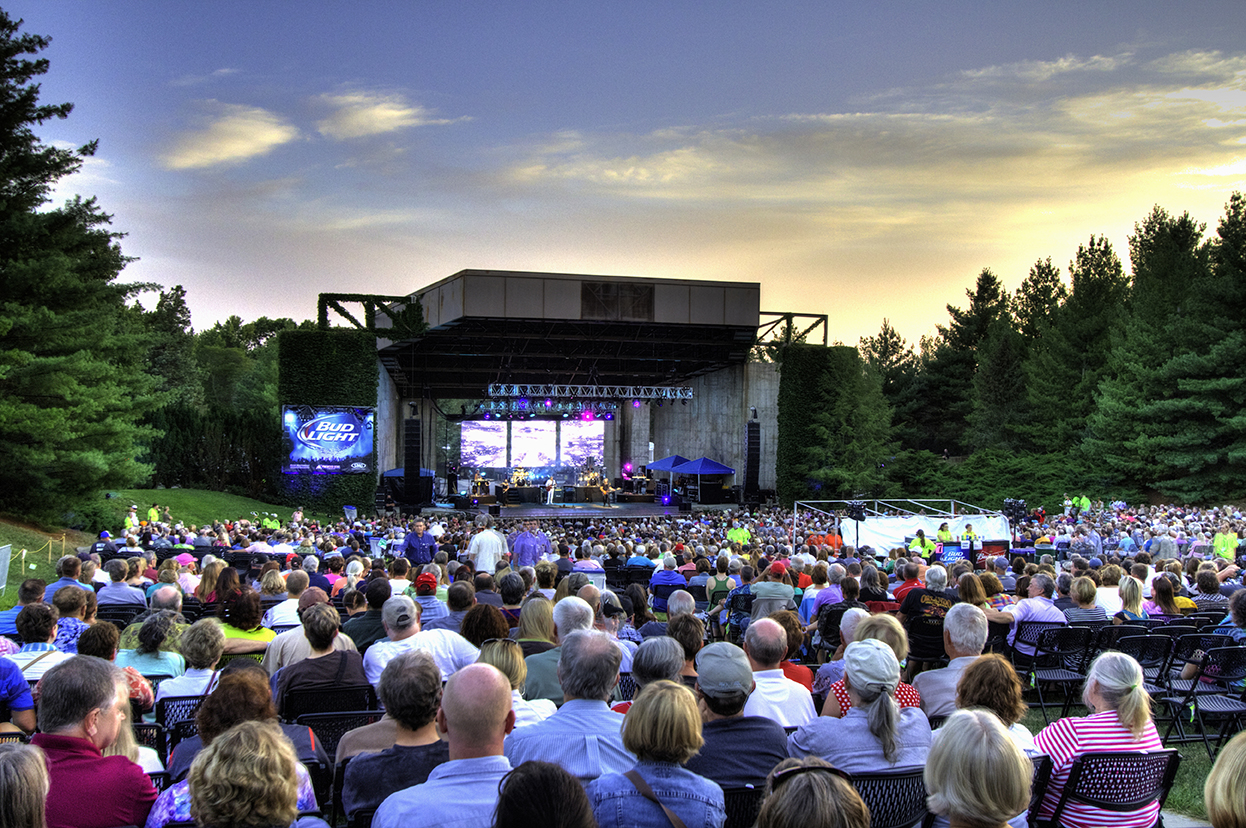 Every summer Lincoln adds a unique series of at least six summer concerts to Lincoln’s already full schedule of musical performances. Traditionally, the Pinewood Bowl hosted one local musical each summer, but starting in 2012, six hugely successful summer concerts were added. These concerts take place at the Pinewood Bowl, an outdoor theatre ringed by a forest of tall pines, located in Lincoln’s lush, wooded Pioneers Park.

The Pinewood Bowl Theater was built in 1947 when the city had a need for a larger venue to hold open-air church services for the airmen stationed at Lincoln’s air base. Several Lincoln residents recognized a need for a diversion for the service men and their families — a place where they could meet for worship and prayer and sometimes for entertainment. They have been meeting on the steps of the Capitol, but soon the group grew to 1,000 people and the Capitol steps just weren’t big enough anymore for the growing Lincoln air base. So Pinewood Bowl was constructed. Today it has become an important facility for the community and Easter services are still held there every year.

All the Pinewood Bowl music concerts feature well-known national artists, so the moment the tickets go on sale, they can sell out. According to the audience the evergreen surroundings, along with evening temperatures and clear blue skies, set the tone for a cool venue for popular bands. The shows chosen for this venue are very popular and almost every concert is packed. From the ’60s folk rock of Crosby, Stills & Nash to the blues of B.B. King and Robert Cray to the indie rock of My Morning Jacket and Counting Crows to British folk rock band Mumford and Sons, these concerts are just loved by the Lincoln public, and have become the place to have fun on a summer evening.

The performers love the Pinewood Bowl too. They genuinely have a wonderful time, truly connecting with their audience in the intimate setting. The summer weather, the happy audiences, and great music makes the Pinewood Bowl a perfect location for the large music shows. Food and beverages, including beer, are available for the concerts, which help make each concert a little more fun. One can count on it being a memorable experience.

The concert series is organized by the Pershing Center and SMG official. Pinewood Bowl’s capacity is set at just over 4,000 for reserved seating and at a little over 5,000 for the two general admission shows. This last year the 5,000+ seat theatre saw performances by Sara Bareilles, the Moody Blues, Ben Folds, Boston and the Doobie Brothers, Ray LaMontagne, Widespread Panic, Blue October and others. “The six 2014 summer concerts at Pinewood Bowl Theater were a resounding success. It lived up to all of our expectations and beyond,” said Pershing/SMG general manager Tom Lorenz. After a super successful 2014 season the organizers are busy planning an equally impressive series of concerts for the summer of 2015.

Take time to enjoy the famous Pioneers Park, as you make your way to the Pinewood Bowl. The 668-acre site is the result of a WPA project in 1930 and includes 440 acres of native tall-grass prairie, eight miles of hiking trails, outdoor exhibit animals, and several gardens. “We’re hoping this continues to be a Lincoln tradition, to be honest,” said Lynn Johnson, director of the city’s Parks and Recreation Department. “We would call this a total success. The shows were very well received. It was so much fun to see that big stage used the way it was designed to be used.”