Lincoln Growing the Beautiful Game at All Levels 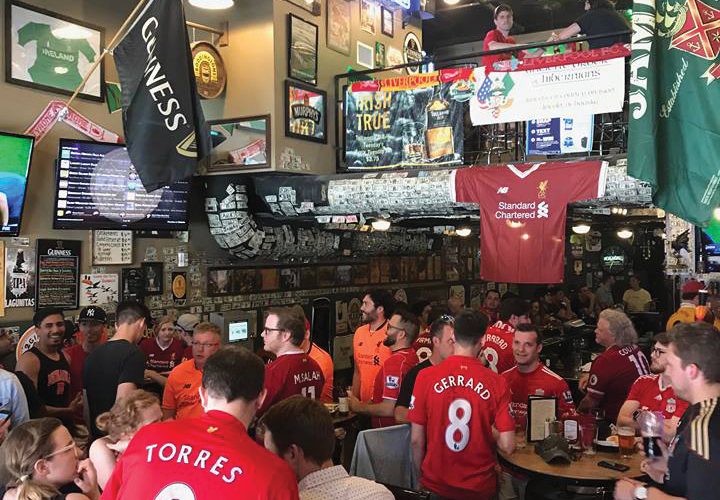 Fans of Liverpool FC gather at McKinney’s in the Haymarket to watch the Champion's League Final.

Like many mid-sized American cities, soccer has long been one of the most popular sports among Lincoln’s youth. Some never play beyond the age of 10; others, such as Lincoln East grad Tyler Polak, go on to play in the country’s top leagues. And others, meanwhile, have founded a supporters’ group of U.S. soccer teams that currently carries a dues-paying membership larger than the population of Hastings.

Whatever one’s interest in the game may be—playing themselves, getting their child to play, or just watching one on TV—in Lincoln, there’s always an opportunity to enjoy what many call “the beautiful game.”

From pre-kindergartners to teenagers, Lincoln youth have a multitude of soccer options. Along with the YMCA’s recreational and more competitive Spirit leagues, organizations such as the Capital Soccer Association and Villarreal Nebraska Academy offer alternative structures. Villarreal, for example, is modeled after Europe’s professional academies, which typically focus on developing ball handling, one-on-one challenging and other skills.

Regardless of level, youth teams compete at a handful of facilities throughout Lincoln, including the YMCA’s Wright and Spirit parks, as well as Speedway Village. As Lincoln’s newest soccer “campus,” Speedway features several outdoor fields as well as facilities for futsal—a five-a-side variation of soccer played on a hard court—and more traditional indoor soccer, played on artificial turf.

On Sundays and some weeknights, 52 weeks a year, the village’s indoor fields often are full of adults of all skill levels. Some have never hung up their shoes, while others perhaps picked up the sport again for the first time since they were pre-teens. All are there for a similar reason, according to Asif Emdad. As manager of Speedway’s facilities, he organizes its year-round adult leagues—as many as 90 teams in the spring, he said. Emdad also referees games, maintains the fields and even fills in on teams short of players.

“It’s awesome to get away for a bit,” he said. “We all have things going on, and it’s an opportunity to clear your mind and not worry about anything else.”

Lincoln welcomed a greater level of competitive soccer this year. 2018 marked the birth of Bugeaters FC, a minor league soccer team that competed in the United Premier Soccer League. Partners Jonathan Collura and Tim Pendrell founded the team—its name an homage to a moniker once given to Nebraskans—with the goal of cultivating local talent to compete at higher levels professionally. His home state was an ideal location for that cultivation, Collura said.

“My love of the game started in Nebraska,” he said. “The state has advanced and developing youth and collegiate programs. I was hopeful that we could become the highest level of play in the state and build a community-based model.”

February 2018 tryouts resulted in a roster that represented countries such as Germany, Colombia, Haiti and Tajikistan—young men who had or still play for local college teams and elsewhere. The Bugeaters played their home games at Lincoln High School’s Beechner Field. From the stands, the team’s supporters’ group, the “Field Hands,” cheered loudly as the Bugeaters faced new UPSL rivals from Kansas City, Minneapolis, St. Louis and elsewhere. The team even traveled as far as New Jersey for games.

While a home field for 2019 season has yet to be determined, Collura said the Bugeaters will continue toward their goal of becoming a community-based club that focuses on developing a new generation of elite soccer talent.

“Next season we intend to fully engage in becoming involved in youth programs and development,” he said.

In 2006, Lincolnites Justin Brunken and Korey Donahoo traveled to Germany for the FIFA World Cup to cheer on the U.S. Men’s National Team. They envied the organization among fans of other countries, many of whom gathered in beer gardens before matches and sang in unison during them.

“We traveled to watch games with our friends and fellow players, and we wanted to create the community we had in Lincoln with the rest of the country,” Brunken said.

The following year, the duo founded the American Outlaws, a name that signified their self-affirmed status as outliers in a country dominated by American football, basketball, baseball and NASCAR fans. Donned in matching T-shirts and American flag bandanas, they ventured near and far to U.S. matches, where they stood, sang and cheered for the full 90 minutes.

Their ranks grew. By the 2010 World Cup, AO chapter bars across the country were packed to the brim with members and other fans who did not make the journey to South Africa to watch the team firsthand. The growth of their ranks was even more apparent in the 2014 World Cup, as AO sent two charted 767s full of members to Brazil. Back home in Lincoln, capacity crowds watched the team from Captain Jack’s, Barry’s and elsewhere.

Today, AO has more than 25,000 dues-paying members across 198 chapters, including London and Mexico City—and its existence is due in part to Lincoln’s soccer community.

“I was always part of an active, soccer-loving community, from the youth level to Lincoln Southeast High School and UNL, and from watching games at houses at first and later in bars,” Brunken said. “The community was always willing to lead and support anything soccer in this city. The fans and businesses here helped us get started and thrive.”

That level of fervent fandom is by no means limited to supporters of the United States. Dubbed the “Husker Hooligans,” University of Nebraska-Lincoln students cheer, sing and drum for 90 minutes while the women’s soccer team takes on opponents at Barbara Hibner Stadium, a state-of-the-art soccer facility opened in 2015.

Within Lincoln’s soccer community, some have even built friendships due to their mutual love of teams halfway around the world. Fans of some of Europe’s most popular clubs often gather in downtown bars to watch matches, which may begin before the sun even rises here. Supporters of London-based Chelsea FC, for example, typically congregate at Jake’s Cigars & Spirits. Liverpool FC fans have been known to gather at McKinney’s.

“I like going to Jake’s because I get to be around other soccer fans who are cheering for the same team—as well as fans of the other team,” said Jacob Warneke.

“Not just in a traditional sense because of the university, but because Lincoln is home to people from all over small-town Nebraska,” said Purkoski, who also serves as president of AO’s Lincoln chapter and co-hosts a “the Real Football Show,” a weekly soccer-only program on ESPN 1480. “They didn’t grow up playing soccer, but now that their kids are playing it, they love it just as much.” Whether playing, cheering or watching on TV, it’s that kind of passion that will continue to grow “the beautiful game” in Lincoln.