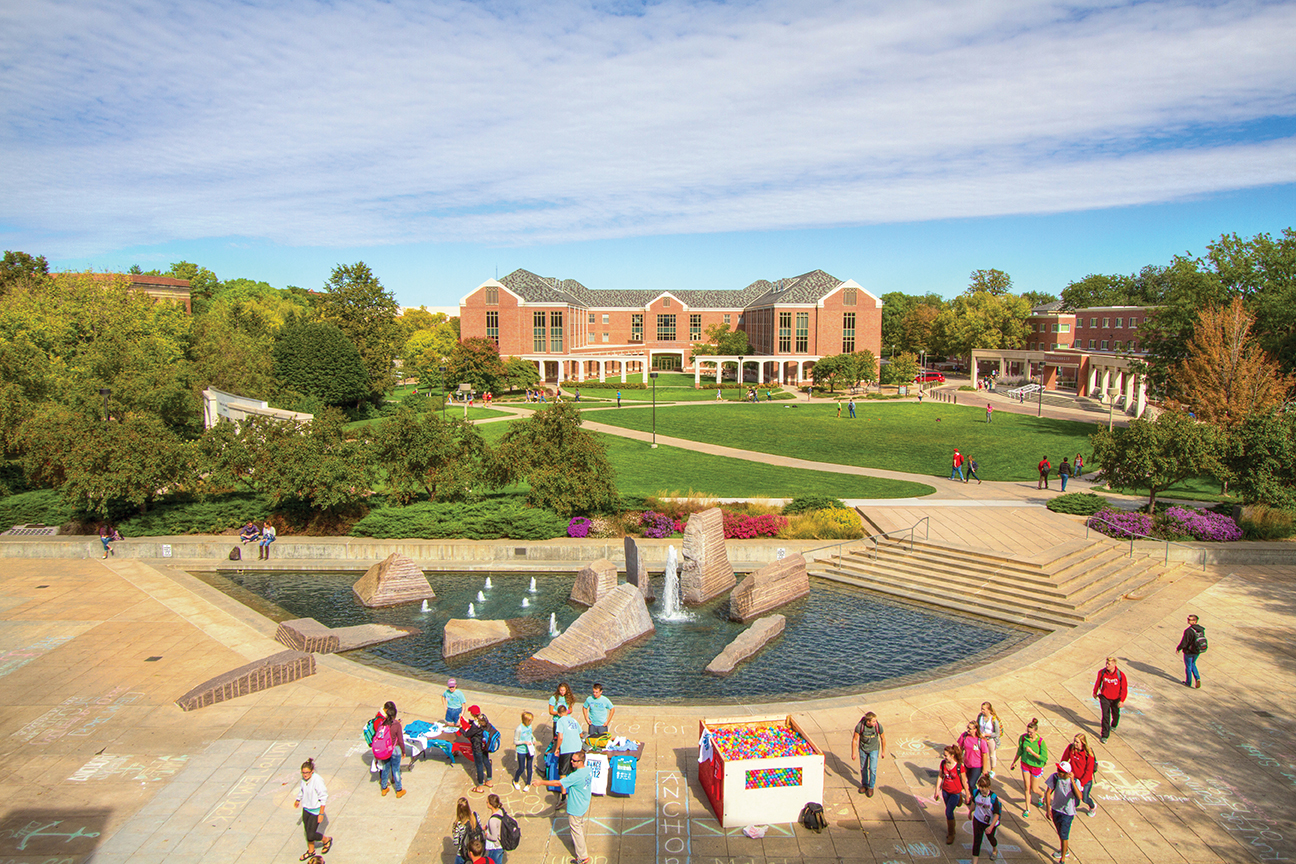 Joining the Big Ten conference in 2010 is part of it. Setting a goal to grow by 5,000 students is another part. A need for spaces where students and faculty can collaborate completes the equation.

New and expanded facilities are springing up all over the University of Nebraska-Lincoln’s City and East campuses. Jennifer Dam, assistant director for campus planning at UNL, says people expect a Big Ten university to offer a certain level of campus experience. And the schools within the conference share ideas and insights to help make that happen.

Furthermore, UNL Chancellor Harvey Perlman is promoting enrollment growth, pushing the total number of students from about 25,000 to 30,000. And those students, more and more, are demanding spaces and places where they can meet and work together.

All of that has driven expansion – from the addition to the east side of Memorial Stadium on City Campus to a new recreation center on East Campus.

Memorial Stadium expansion – The new construction added 6,000 seats on the stadium’s east side – raising the total to 92,000 – as well as a campus plaza outside the stadium gates. But the University is proud that the addition also created 50,000 square feet of space for major research: the Center for Brain, Biology and Behavior and the Athletic Performance Lab.

The Center for Brain, Biology and Behavior houses imaging equipment that UNL scientists use to better understand brain biology and function. Nebraska is leading a collaborative Big Ten/Ivy League study of concussions in sports, a major concern in college athletics today.

The Performance Lab focuses on areas critical to increased athletic performance as well as ways to preserve athletes’ health and prevent injuries. Among other facilities, the space includes a half-court basketball floor and a plot of artificial turf where researchers can study athletes while they perform.

New residence halls – An additional 1,500 students can now take advantage of the opportunity to live on campus thanks to three new university residence halls: Knoll Hall, University Suites and East Side Suites cluster along R Street between 17th and 18th.

Just across R Street to the south, the 50/50 Project will provide privately owned housing on the street level and the top three floors as well as University-owned parking on the seven floors in between. As many as 475 students can take advantage of the new apartment rentals in the building at the edge of City Campus.

Nebraska Union – Renovations on the Union began in spring 2014, and the new look was ready for students’ return to campus in August. The goal was to open the space and make it more welcoming, to create more collaborative and study spaces for students and to renovate meeting rooms for use by faculty and student groups.

Redesigned spaces plus new flooring and furniture give the Union an up-to-date look and welcome visitors to the campus.

New home for the College of Business Administration – The business college plans to break ground in early 2015 for a new $84 million building at 14th and Vine streets. It will be the largest academic building project in UNL’s recent history and reflects the fact that the number of CBA students is growing rapidly. The new building will serve not only business majors but also an increasing number of students taking advantage of CBA’s new business minor.

Outdoor Adventure Center – It may not have a big physical footprint, but the new Adventure Center at 14th and W brings major enhancements to campus recreation facilities. In addition to a climbing wall, the center features a bike shop and bike lockers. And students and faculty who belong to the Campus Recreation Center can rent canoes, tents and other outdoor equipment at the new center.

Learning complex in Love North – As more and more previously print resources move to digital formats, UNL is remodeling part of Love Library to become a learning center complex. The interior will include a coffee shop, testing center and study and learning spaces. And outside the north wall, a plaza will offer more spots for students and faculty to meet, work and collaborate.

An addition to the Activities Building on East Campus will create a new student rec center on the campus, home to the College of Agriculture and Natural Resources and related research projects and to parts of the College of Education and Human Science.

The Morrison Center for Virology’s new addition opened in summer 2014, and a new Veterinary Diagnostics building is set to break ground in early 2015.