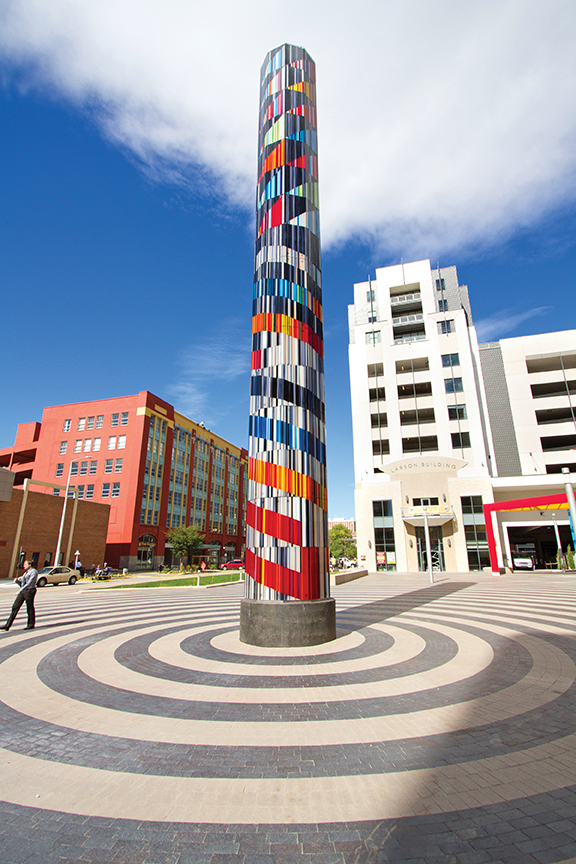 There are more than 100 pieces of public art on display throughout the city. They come in many forms — sculpture, memorials, murals, and monuments. Take the time to enjoy the public art in the city.

With tremendous excitement the newest public sculpture was finally unveiled. The large glass spire was installed by German steel and glass workers in the heart of downtown Lincoln. Inspired by Japanese sand gardens, the concrete concentric circles that surround the five-story, multi-colored, lighted glass tower was designed by renowned sculptor Jun Kaneko, who won the bid of $1.15 million. The 57-foot-tall glass tower, fabricated in Germany, is the centerpiece of the new $3.64-million Tower Square at 13th and P streets. A 1970s theater was demolished to make way for this shiny new plaza with lots of seating and space to simply linger and enjoy.

Lincoln mayor Chris Buetler, well known for his love of art, made it clear that he wanted a “significant piece of art” in the new plaza. This piece of sculpture has become one of the main attractions in the city. 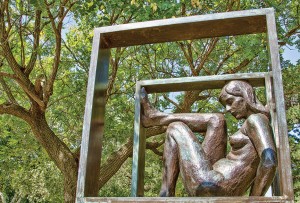 The Sheldon Sculpture Garden, located on the campus of the University of Nebraska-Lincoln, features 30 distinct sculptures from the early 20th century to the present. Dedicated in 1970, the garden originally covered 2.5 acres. Outstanding pieces of modern and contemporary sculptures have been installed in the garden as well as across the campus. These wonderful sculptures, created by artists from across the world, continually intrigue UNL students and staff as well as visitors. The most popular sculptures in the Sheldon Sculpture Garden include Torn Notebook by Claes Oldenberg and Coosje van Bruggen, Old Glory by Mark di Suvero, and Greenpoint by Richard Serra.

For a map of the sculptures and for more information, visit sheldonartmuseum.org. Other sculptures on campus include David Smith’s Superstructure Four, an amazing stainless steel work; Tony Smith’s Willy; Prismatic Flake by the Alumni Building on R Street; and Variable Wedge, an abstract close to Westbrook Music Building. These are only a few of the sculptures that grace UNL’s campus.

At first glance, a 15-foot-tall earth-toned human head rising out of the ground below Lincoln’s new Union Plaza seems to be just that, a giant human head. But the ceramic sculpture, by New York artist James Tyler, has a deeper meaning—about 200 feet deeper. Groundwater Colossus is the personification of freshwater aquifers that lay hidden beneath the Earth’s surface. Specifically honoring the Ogallala Aquifer, which provides drinking and irrigation water to eight states, the Groundwater Colossus is one of the largest freestanding ceramic sculptures ever created.

This piece was installed by Tyler in mid-August 2012. More than 300 distinct bricks made of red clay were stacked in concentric circles, eventually forming a mostly hollow head.  Union Plaza in Antelope Valley, near 21st and P Streets is the home of Groundwater Colossus. For more information on Groundwater Colossus, visit tylersculpture.com or lincoln.ne.gov/city/parks.

Sixty-nine pieces of star-themed artwork graced Lincoln during 2006. This public art project, which benefitted the Lincoln YWCA and each work’s artist, was made of a wide variety of styles—photographs to sculptures, mosaics to paintings. Each piece of artwork was created with a general theme of star in honor of Lincoln, the Star City.

These are only some of the public sculptures in Lincoln—many more significant works enhance the city, it’s parks and it’s museums.