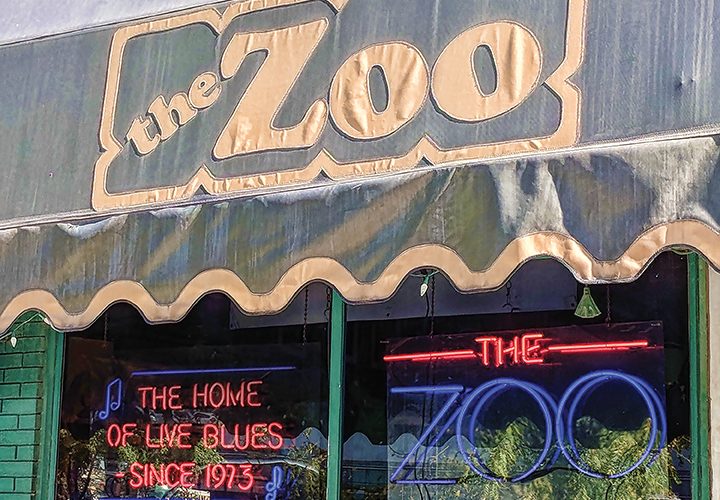 There is no shortage of spots to catch live music in Lincoln today. For cufflink and stiletto occasions, the Lied Center and Rococo Theatre come to mind. For total audiovisual exhilaration, Pinnacle Bank Arena begins and ends the conversation. For natural beauty, the outdoor amphitheater of Pioneers Park’s Pinewood Bowl impresses. But for the spirit of live music to arrest your soul, there are really just two houses of worship: theZoo Barand the Bourbon Theatre.

To support this claim, I offer the following eyewitness testimony from a recent Saturday night. At 9:25 p.m. hundreds congregate inside the dimly-lit Bourbon (1415 O Street), a Prohibition era cinema-cum-live music club. We’re listening to a seven-piece band fronted by a woman named Neko Case with carrot-colored hair. She strums her guitar and sings with the trustworthy nostalgia of a hardened troubadour. “I miss the smell of mystery/Reverb leaking ‘outta tavern doors/And not knowing how the sounds were made.” An hour in, Neko tells us today is her 48th birthday, to which we in the audience respond with a lively and atonal “Happy Birthday.” A cake then materializes and body-surfs its way to the stage. All of this is punctuated by a fervid five-song encore. Translation: one of America’s best folk singers played an impassioned 100-minute set to a rapturous crowd in the heart of downtown for the price of two merlots in San Francisco.

The Bourbon has had many nights like this since opening in 2009. Jeremiah Moore, the bar’s founder, poured blood, bourbon and tears to make it what it is today. This includes remodeling the unmistakable marquee that’s become an O Street fixture, building a rye whiskey bar, adding a small stage in the front room, and maintaining a high fidelity speaker system. But the bar’s biggest achievement is more ethos than infrastructure. During the years that Moore ran things (he sold it in 2016), the Bourbon prioritized community but broadened bookings to include nationally-known acts. That meant a fundraiser for sustainable local gardening one night could by the next see two grown men rapping in demonic clown costumes.

“We took the ‘we are a blank canvas to paint on’ mentality to the Bourbon. But not everyone could paint that big a canvas, so we had to adapt to how we were doing that. As we kept our grassroots going, we started making more relationships with the national agents so we could do some bigger shows that helped fuel the business,” recalls Moore.

A block north of the Bourbon on 14th Street is the Zoo Bar (136 N.14th Street). Wedged between two larger businesses, the Zoo is easy to miss but hard to forget. Over the past five decades, some of blues music’s most cherished names—Buddy Guy, Bo Didley, Albert Collins, Robert Cray and Magic Slim—have graced its small but hallowed stage. Handbills from such shows, weathered by untold amounts of sweat, beer and cigarette smoke, serve as wallpaper and archival vault. Though started as a destination for blues artists weathering the 1970s disco era storm, the Zoo has evolved into a multi-faceted venue for stand-up comedy, wine tasting and local music without abandoning its roots.

“I’m not interested in running a museum,” jokes Zoo Bar owner Pete Waters, who started out tending bar in 1987.

“I’m proud of our history, but there has to be a present and a future to keep the doors open.”

To ensure there would be such a future, Waters got creative. In the dead of winter thirteen years ago, the Zoo invited 23 bands to play over the course of a long weekend. They called it Lincoln Exposed, a double entendre for the city’s undiscovered musical talent and President Abraham Lincoln’s Birthday on February 12. Things went pretty well that weekend, so much so that last year’s Lincoln Exposed boasted 111 bands or soloists—all from Lincoln—to five venues over four nights (the festival will run Feb. 6th-9th, 2019). As national music currents ebb and flow, both the Zoo and Bourbon have found success in embracing the emergent local scene.

“The local scene is really strong. That’s why we started Lincoln Exposed, because I think people just didn’t realize how many great bands there were in Lincoln. You can fill up multiple venues for multiple nights in February just with local talent. Part of the reason for the festival was to kind of point that out,” says Waters.

In the summer months, both venues take to the streets—literally. Two years ago, the Bourbon launched Lincoln on the Streets, a partnership with Mammoth Live and Pinnacle Bank Arena management company SMG that transforms Centennial Mall into a block party in late June. Nebraska darlings 311 drew a crowd of 5,500 for the inaugural and last year a torrential thunderstorm forced veteran rapper Nelly and 8,000 fans into the arena for a spirited set. The Zoo takes its turn a few weeks later with Zoofest, a do-not-miss block-long celebration (14th Street from O to P) of roots music spanning an entire weekend in early July. The lineup each year reflects a tasteful balance of local talents like Evan Bartels to Rock and Roll Hall of Fame inductees Los Lobos.

In the end, perhaps the Zoo and the Bourbon’s greatest assets are well-earned reputations. While both venues continue to supply Lincolnites with the indescribable rapture of an indelible show, the artists delivering them have taken note too. According to Moore, this has steadily led to a greater availability of live music in Lincoln.

“Show after show, relationship after relationship, we were able to bring more people into the fold and do more concerts. So all these folks that may have had to drive to Omaha for a show, could now just stay in their own hometown and do it. And that makes it easier for people who are new to the concwert scene to be able to come to more concerts, because there are more recognizable names coming to our town.”