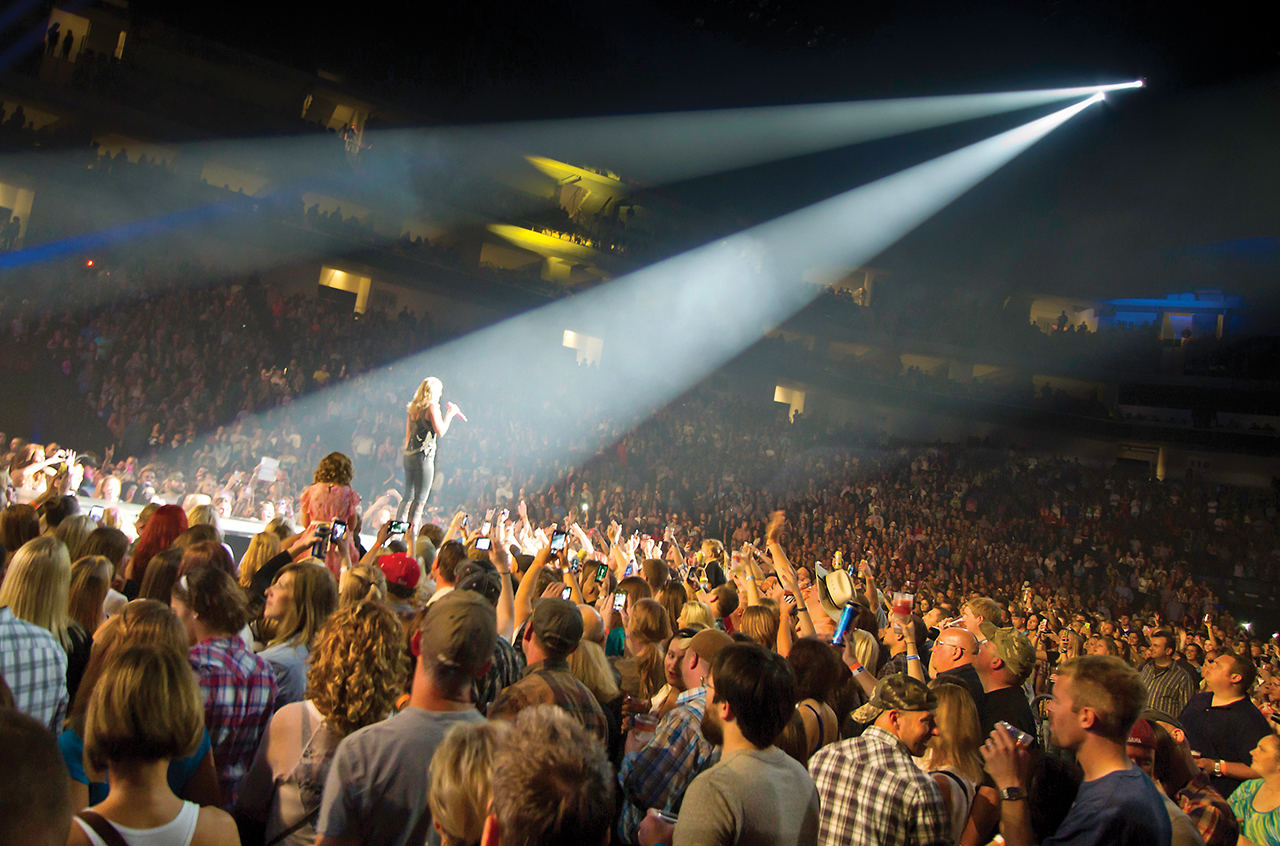 In a less-than-four week span in the fall of last year, Lincoln residents and visitors were able to see crooner Michael Bublé, country star Jason Aldean and rock legends The Eagles, all perform at the same place.

Going to the concerts didn’t require a 52-mile drive to Omaha, 192-mile drive to Kansas City or 488-mile drive to Denver. No, the musical acts were playing just down the street from Memorial Stadium and the University of Nebraska-Lincoln campus.

They played at the Pinnacle Bank Arena, a 470,400 square feet multi-purpose arena that officially opened in September 2013. The arena is the cornerstone of Lincoln’s West Haymarket Redevelopment Project and offers concerts, touring acts and sporting events.

The arena came to be after a city vote in 2010. Fifty-six percent of voters voted “yes” to building a multi-million dollar West Haymarket arena. Three years and $179 million later, the arena, with a concrete and metal panel facade, roof deck and glass concourse, was ready.

“This arena is not just for the city of Lincoln, but the whole state of Nebraska. … Together, we are raising one really big barn,” Mayor Chris Beutler said at the arena’s opening, according to the Lincoln Journal Star.

The arena is part of the West Haymarket Redevelopment Project, which will reinvigorate the 400 acres west of downtown Lincoln and the Haymarket area. New hotels, restaurants and office space surround the arena. For those who enjoy their visit so much they decide to stay, new upscale residential units have also been built.

Visitors walking into the arena will notice a giant red “N” to signify the University of Nebraska’s involvement with the arena. The arena will be the new home of the Nebraska men’s and women’s basketball teams. When configured for Husker games, the arena will seat about 15,000 fans. Nebraska will also be the first Big Ten conference school to feature a center-hung HD video board.

There will be 73 concession stands and two private club lounges. Outside, there will be ample parking with 7,000 new parking spaces added to the area.

“When you think of an arena’s basic structure, you just don’t expect all the options that are there—from our locker room that’s modeled after the Hendricks Training Complex to the ‘Chocolate Wall’ sculpture and all of the new concession stands,” Nebraska women’s basketball coach, Connie Yori, told Huskers.com. “We went all the way up to the top level, and I think every seat in the place is a great seat. If I wasn’t coaching, I’d be sitting in the club seats. And all that parking…it’s going to be so much easier for our fans who won’t have to walk so far to get to their seats.”

Michael Bublé played the first concert at the arena on Sept. 13 to an enthusiastic crowd who held signs and yelled his name between songs. As concertgoers filed into the arena, staff members gave out souvenir lanyards and made sure everyone knew where to go for their seats.

During the concert, Michael, a three-time Grammy winner, said he felt honored to be the very first headliner at the arena.

“Ladies and gentlemen, for the first time, welcome to the Pinnacle Bank Arena!” Bublé said to thunderous applause.

More star-studded acts, including Bon Jovi, John Mayer and Elton John, performed at the arena during the fall 2013 season.

The concert with the most buzz, however, was the Jay Z concert on December 1. Considered one of the top hip-hop artists in the music industry, Jay Z has won 17 Grammy awards and regularly performs sold-out shows in large cities like New York, Los Angeles and Chicago. The Lincoln stop was his second stop on his Magna Carta tour and the only concert within 400 miles. His next closest concert was in Denver, 488 miles away.

His tour stops illustrate the caliber of Jay Z and how Lincoln is now able to compete with larger cities for entertainment. Pinnacle Bank Arena was listed with Staples Center in Los Angeles, Pepsi Center in Denver and Mandalay Bay in Las Vegas. Arena manager Tom Lorenz of SMG told the Journal Star that Lincoln would never have had an artist like Jay Z come to Lincoln if not for the arena.

“This is great, to be part of a tour that brings Jay Z to the Heartland,” Lorenz said. “It’s really exciting for us to get this.”

The West Haymarket’s benefits to the Lincoln community go beyond the arena’s sage. The development will have a $260 million annual economic impact on the city’s economy, according to a May 2009 economic analysis report. An estimated 7,800 new jobs have been created during the construction process and, once everything is completed, the development will provide an additional 1,200 permanent new jobs.

When describing the arena, Bublé said it best during his opening show: