“Lincoln Commercial Club” – What Was (and Is) It? 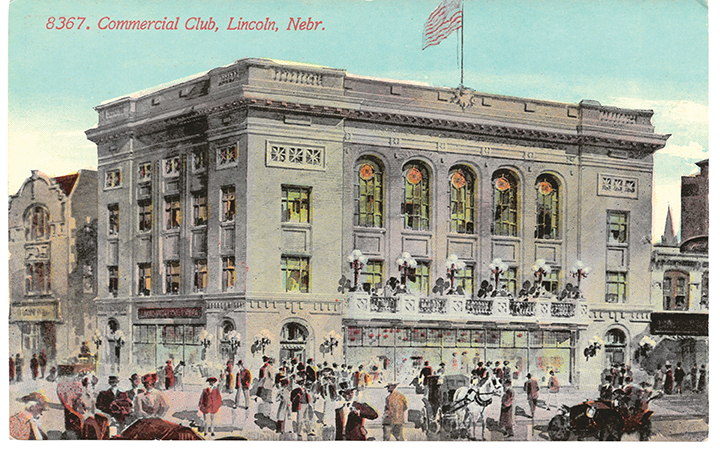 Just three years after the tiny town of Lancaster was chosen in 1867 as the capital site of the new State of Nebraska, local boosters organized a “Board of Trade” to promote their businesses. Charles Gere, founding publisher of Nebraska State Journal newspaper, was the first chairman of the Board of Trade, which incorporated in 1874.

Lincoln’s population grew from about 30 in 1867, to 13,000 by 1880, and exploded to 55,000 by 1890. By 1893 the Board of Trade’s struggles with railroads over fair freight rates had exhausted that organization, while a nationwide economic depression (the Panic of 1893) required a renewed local response. Lincoln business interests reorganized as the Lincoln Commercial Club (LCC) in 1894. LCC met in rented quarters downtown, until in the new century discussions began on LCC building its own clubhouse.

Fund-raising and discussions of site-selection began in earnest in 1908. The northeast corner of 11th & P, where a couple of houses stood, was an early candidate. Consideration was also given to sharing a new building with Bankers Life Insurance (now Ameritas) or occupying the top floor of the tall office building planned by the First National Bank (now Lincoln Building at 10th and O). With fund-raising proceeding well, the 11th & P site was selected in 1910, described as “easily accessible to the jobbers and retailers alike,” referring to the wholesalers west of 9th Street in
Haymarket and the downtown merchants east of 9th. Architect George A. Berlinghof (1858-1944) was commissioned to prepare a design including ground-floor commercial space, LCC offices (and billiard room) on the second floor, and a large dining room and kitchen occupying the third story, with a fourth-floor mezzanine on three sides. German-born Berlinghof had practiced in Nebraska since 1881 and in Lincoln since 1905.

The first “adopted” design for the Lincoln Commercial Club Building published in Lincoln newspapers in March of 1910 closely resembles the building as built, from the second story to the crowning cornice. However, the first story was shown with glass storefronts stretching from corner-to-corner on P Street (and presumably on 11th). At least visually, the weighty masonry construction of the upper floors would have floated on that “light,” glassy base.

While the design for LCC was still on the drawing board in Berlinghof’s office in early 1910, he promoted his young draftsman Ellery L. Davis (1887-1956) to full partnership. Davis had grown up in Lincoln, where his father, a University of Nebraska mathematics professor, became N.U.’s Dean of the College of Arts and Sciences in 1901. Ellery graduated with an architecture degree from Columbia University in 1908 and returned to Lincoln.

By May 1910, a Lincoln newspaper noted “A sketch in colors of the proposed Commercial Club building…has been prepared by the architects, Berlinghof & Davis, and has been hung in the present…club rooms.”

That “sketch in colors” was soon reproduced in postcards, which showed the building (but perhaps not the street scene) as built. As they often did on major projects, Berlinghof and Davis turned to a nationally known artist/consulting architect, Francis W. Fitzpatrick of Washington, D.C., for a lively depiction of their design. The rendering shows the brickwork continued to the ground at the corners, pierced with arched doorways, visually supporting the mass above.

When the building plans went out for bids later in 1910, the interest of contractors, and their bids, were both high. The architects were instructed to make reductions and the Club discussed whether to eliminate the ground floor commercial space and perhaps build just two stories over a basement. P Street property owners pledged $20,000 in support of the full design and in March 1911 a $72,000 contract for construction was awarded. With the cost of the land, the project cost approached $100,000, and with furnishings, nearly $150,000.

Donations from leading members allowed upgrading of certain interior finishes to reverse proposed cuts that “may leave the club dining room more like an auditorium than a cozy club room.” Lincoln Commercial Club dedicated its new building in April 1913 with nearly 1,500 members on its rolls. The Club secretary was proud to call members’ attention to a laudatory, illustrated article on their new clubhouse in Chicago Commerce, a weekly publication of the Chicago Commercial Club. A photograph of the finished building was captioned “What a small but energetic city can do when it tries.” The article continued “…in the growth of the commercial organizations of the smaller cities there is much for even metropolitan centers to learn and even more to applaud.” LCC’s billiard room included 18 mahogany tables. The 20-foot tall dining room measured nearly 70 feet by 100 feet on the main floor, with additional smaller rooms on the mezzanine. The coffered ceiling was (and is) ornamented with huge plaster rosettes, and the plaster cornice around the room is studded with lightbulbs celebrating the latest in early 20th century illumination.

In its earliest days, first-floor tenants included a Burlington Railroad ticket office and Roberts Undertakers. Lincoln Commercial Club rebranded itself “Lincoln Chamber of Commerce” in 1920 and continued to occupy the building into the 1950s, when it moved to the former First National Bank (“Lincoln”) Building at 10th and O, a location which the Club had considered in 1910 as an alternative to building its own clubhouse.

Remodeling in the mid-20th century removed the cornice and south balcony, and blocked up the five arched windows lighting the dining room, as well as largely bricking in the storefronts. More sympathetic renovations reopened the arched openings and storefronts in the late 1980s and began to reverse damage done to the ballroom. Thankfully that process has recently been completed in the ballroom and with reinstallation of a cornice.