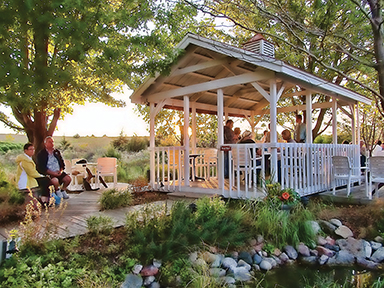 When it comes to producing wine in Nebraska, the key ingredient just may be family. That’s because many of the wineries throughout the state, especially around Lincoln, are family-owned and operated, with individuals pouring their hearts and souls into the best reds, whites, blends, blushes and hard apple cider the state has to offer.

And it goes beyond just growing grapes and making wine. These family-run businesses also are about providing experiences, with many area wineries presenting music and entertainment series, hosting weddings and special events and serving themed dinners.

Leading the way is James Arthur Vineyards, now the state’s oldest operating winery. It started in 1992, when James Arthur Jeffers’ son-in-law Jim Ballard, now head winemaker and co-owner, suggested he grow grapes as a hobby. The family planted the first 100 wines with tender loving care. As the number of vines grew, so did the idea of turning the family hobby into a business, and after careful consideration and research, James Arthur Vineyards was born.

It opened in 1997 at its home north of Lincoln. A pioneer in the Nebraska wine industry, James Arthur Vineyards at 2001 W. Raymond Road is still the largest wine producer in the state. Less than 10 minutes from downtown Lincoln, the winery has hosted hundreds of thousands of visitors, including those from every state as well as other countries.

Surrounded by nearly 20 acres of vineyards, the winery also brings in grapes from nearly a dozen other growers across the state, making its final product truly unique to Nebraska. In the mid-2010s, Ballard introduced Curveball, a hard apple cider series. The winery began canning its Grand Slam and Double Play ciders in 2019, making them available at area retail stores.

Today, the vineyard has thousands of vines that flourish near the 8,000-square-foot tasting room and production facility — surrounded by a panorama of gazebos, waterfalls and beautiful landscaping. A four-season porch completed in February 2019 offers a spectacular view of the vineyards, and a large storage shed sits east of the winery.

James Arthur is known for its World Famous Murder Mysteries, never-a-cover-charge summer and fall music series, haunted hayrack rides, cabaret and comedy shows. It extended the winery experience into Lincoln with its purchase in 2014 of the From Nebraska Gift Shop at Eighth and Q streets, where Jim and Barb Ballard added a tasting room to the store that features the best of Nebraska-made products.

Since its inception, the winery has built quite a resumé of accolades, earning “best of” honors at the Florida State Fair, Monterey and Jerry Mead international wine competitions. The winery’s most popular and most-awarded wine, Edelweis,s has been featured in Wine Spectator and earned two prestigious Jefferson Cup Awards.

While being the oldest and most established, it’s certainly not the only award-winning, family-owned winery in the area.

Started in 2001, Deer Springs Winery is east of Lincoln at 16255 Adams St. Its roots began as a dream of Jim Partington, retired U.S. Navy Rear Admiral and strike fighter pilot.

After retiring from the Navy and returning to Lincoln, Jim and his wife, Barbara, built a house on the family homestead. Jim aspired to be a “gentleman farmer” and ended up planting some wine grapes, which eventually lead to a tasting room opened in 2007. Guests can enjoy Deer Springs’ finest in the quaint farmhouse renovated to reflect the charm of the original structure on land that was deeded to an ancestor in 1874 by Ulysses S. Grant. The winery is surrounded by pine trees, giving it the peaceful atmosphere of days gone by, while still providing contemporary comforts.

The Partingtons’ daughter, Jennifer Reeder, is the winemaker, and has created a plethora of wonderful tasting, award-winning wines that are distinctively Nebraska. The winery features live music on weekends with a quaint, bucolic backdrop.

WindCrest Winery, located north of Lincoln near Raymond, has made the transition from primarily grape growing to producing and selling its own wines.

When James Arthur Vineyards begin looking for growers in the late 1990s, Dale Lillyhorn was one of the first to jump on board. He and his wife, Jan, thought their 35 acres of land would be ideally suited for the task. After establishing the vineyard and selling off grapes for a number of years to James Arthur, they opened their production/tasting room to the public, and  WindCrest was born in 2008.

The winery at 3110 W. Branched Oak Road is open year-round. Visitors can sample a wide variety of wines inside or on the patio with a picturesque view of the countryside.

When Mike Murman planted his first acre of grapes in spring 2003 southeast of Lincoln near Palmyra, he was looking for a hobby that would provide fruit for amateur winemaking. He’d been making small batches in his basement for 30 years and today owns Glacial Till Vineyard and Winery at 1419 Silver St., Ashland.

In subsequent years, Murman’s belief in quality grapes, coupled with his skill in winemaking, resulted in several silver, gold and best-of-show amateur winemaking awards. The evolution of the vineyard and winery has been a direct reflection of the hard work sons John, Tim and Craig have put in over the years.

With a surplus, the Murmans decided to share their love for crafting quality wines with others. In 2007, they put up a building for Glacial Till Vineyard, became a bonded winery in 2008 and opened to the public in summer 2009. The winery has an event center for weddings, holiday events and corporate meetings.

Glacial Till also operates a tasting room on Silver Street in downtown Ashland. A mix of new and old, the tasting room offers a rustic feel with original brick exposed and original wood floors refinished. It’s filled with modern sleek black furniture and a custom-made bar that was built with materials from the winery.

Glacial Till has become the state’s leading producer of hard cider, with its primary flavors of Original, Hibiscus Ginger and Passion Pineapple available at the winery, tasting room and retail stores throughout Nebraska.

Cellar 426, also in the Ashland area, opened May 2012 on a 20-acre site at 1402 Dennis Dean Road, which is half a mile from Nebraska 66. The winery is owned by Richard and Amy Hilske, who planted their first grapes on the site in 2006 and broke ground on the winery building in November 2010.

The Hilskes combined their love of wine and the outdoors to begin the venture. Shortly after they met, they began travelling across the country to vineyards and producing small batches of wine at home. Their dreams to open a winery started during these trips, and Cellar 426 has become home to live music and known for its amazing sangria flavors.

Just south of Lincoln near Roca is Capitol View Winery, a 14-acre property with a tasting room uniquely shaped like an old Nebraska barn. Capitol View at 2361 Wittstruck Road, Roca, is the newest winery to the Lincoln area, but its roots go a bit deeper. Established in 2017, the vineyard was planted in 2004 and the original owners opened WunderRosa Winery in 2009.

New owners Les and Trish Meyer bring a unique look and feel to Capitol View Winery and Vineyards. A former professional boxer and a Colorado farm girl, both became Nebraska lobbyists. Their professional backgrounds give personal meaning to the Capitol building on their label, and combined with the vineyard’s beautiful vistas of the Lincoln skyline, Capitol View is an ideal name for the winery.

All the grapes used for Capitol View wines are grown within minutes of the land, including 2½ acres of estate-grown fruit.

The tap house in north Lincoln offers hand-crafted wines and wine cocktails as well as craft beers. The patio has a mesmerizing fire table, stone fire pits and a brick pizza oven. For a truly memorable experience while bridging the gap between the wine connoisseur and the beer enthusiast, the SchillingBridge Cork & Tap House is the place to be.