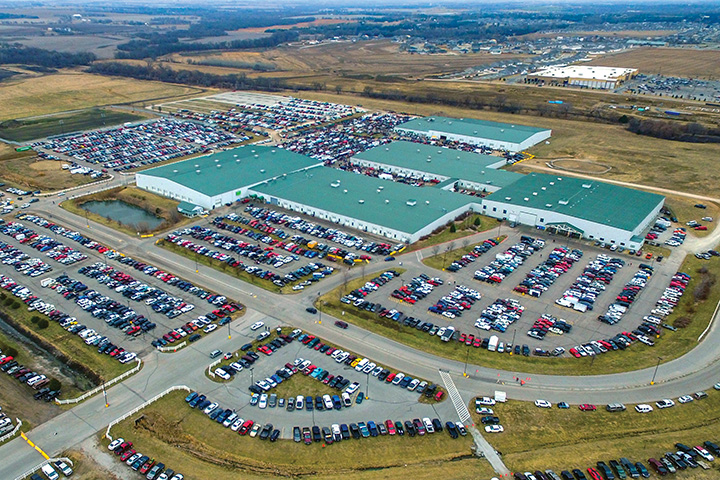 The Lancaster County Agricultural Society was established in 1870 under Nebraska state law to support youth and community involvement in agriculture. Back in the late 1990s, a countywide group of volunteers came together with the dream of securing a future home for the County Fair. As the fair outgrew its space on the Nebraska State Fairgrounds, members of the society visited more than 20 fairgrounds around the country, then raised money to build the first of three phases of the Lancaster Event Center.

In 2014, the society began a re-launch of the center and fairgrounds to increase use and satisfaction for users. Remodeling and upgrades were completed with support from a bond refinancing and county visitors lodging tax grants.

“Our first message for national events is that we are smack dab in the middle of the USA,” said Amy Dickerson, managing director of the venue built in 2001 with the Lancaster County Fair in mind.

“We also just completed a successful re-launch of the Lancaster Event Center, where over $7 million in improvements and upgrades were made since 2013, on top of other significant operational improvements.”

Dickerson was hired as the start of the re-launch in 2014 with the encouragement of community leaders seeing the potential impact of the facility at 4100 N. 84th St. on the eastern edge of Lincoln.

The center offers more than 400,000 square feet of indoor space across eight major areas on 160 acres of grassy grounds. It is designed for a continual flow from five interconnected buildings or segmented to host five or more separate events simultaneously. Outdoors, the fairgrounds features ample parking, a multi-use spectator arena, several warm-up pens, cattle ties, a permanent 200-site campground and a state-of-the-art Wi-Fi system connecting everything indoors and out.

The Event Center customizes setup and services for each show, and offers more food and beverage options than you can shake a county fair turkey leg at. Its in-house catering ranges from themed cafes with tailored, affordable menus, and its banquet hall can seat more than 1,000 people for everything from BBQ to Mexican buffets bars to a New Orleans-themed night. The center also is known for tailoring pop-up food and beverage bars and working in local food trucks to add capacity, convenience and variety.

In 2017, in partnership with the Lincoln Convention and Visitors Bureau, Lincoln won the bid for the National High School Finals Rodeo, which has helped draw attention to the venue. The rodeo attracts more than 1,700 high school athletes from 43 states, five Canadian provinces, Mexico and Australia, competing for world-championship rodeo belt buckles.

The Lancaster County Fair will celebrate its 150th year, July 30-Aug. 8, 2020. Since moving to the Event Center, and being renamed the Super Fair in 2010, attendance has grown from an annual crowd of 5,000 in borrowed buildings on the former Nebraska State Fairgrounds to nearly 130,000, and the fair’s run was expanded to 10 days after the Nebraska State Fair moved to Grand Island.

The Super Fair has grown to showcase youth, agriculture and other exhibits, and features more than 1,200 4-H, FFA and Open Class youth and community exhibitors with more than 8,300 entries—from alpacas to robots. Fairgoers can experience carnival rides, fair food, motorsports and free attractions including racing pigs, a petting zoo and live music. For the anniversary celebration, the fair will bring in Aussie Kingdom, Cowtown USA and Wolves of the World.

The Event Center team is adding a 3,300-person grandstand with shade cover to its outdoor arena, along with ample livestock pens and rodeo/equine arena setup options. A 1,250-site campground will be a magnet for many new types of groups that will bring visitors, vendors and staff to town. Combined with its convenient location right off Interstate 80, ample parking and proximity to Lincoln’s small-town feel with big-town amenities, it’s time to start planning your trip to Lancaster Event Center and fairgrounds.

Cowboy boots are optional. Good times are a
given. Check out the calendar at LancasterEventCenter.org.