So Many Beautiful Trails 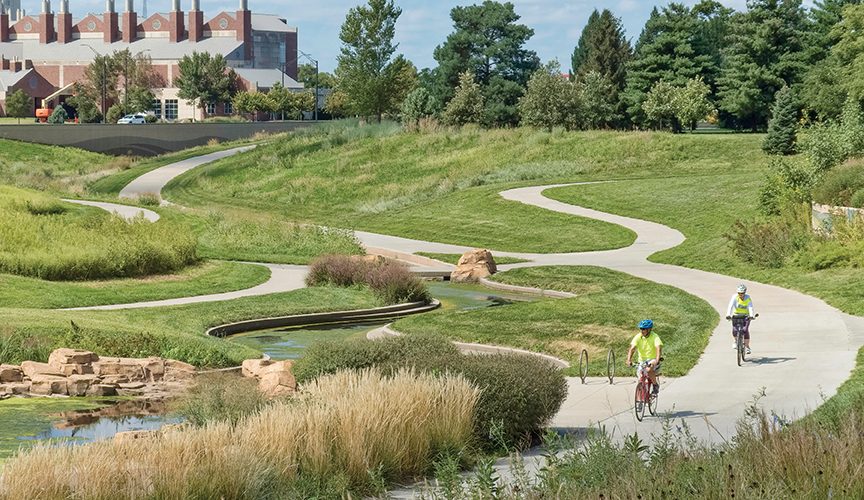 Lincoln’s trails entice and tempt people to go outside, contribute to the city’s quality of life and provide ecological connections and corridors for other species that occupy urban spaces.

They provide access to places in and around the city that may be largely invisible or difficult to see otherwise, and they offer a respite from city life and the opportunity to see and experience nature close to home and work.

Winding from the far corners of the city, the trails converge in the heart of downtown. The city’s trails link to many of Lincoln’s parks, gardens, schools, colleges and universities, swimming pools and ballparks. Popular destinations including Lincoln’s Children’s Zoo, Pinnacle Bank Arena and Pioneers Park Nature Center can be reached on the trail system.

“The looping and connecting of one trail to another is distinct from other trail systems,” he said. “Most people live within one mile of a trail.”

And the trail system continues to grow. Yankee Hill Trail, between 70th and 91st streets, connects with Moore Middle School at 87th Street and Yankee Hill Woods Drive. The area includes the new Copple YMCA and Jensen Park south of the school, which is intended for open space and sports fields.

The MoPac Trail stretches 27 miles from the University of Nebraska-Lincoln to the small town of Wabash east of the city. The MoPac was built on an abandoned Missouri Pacific Railroad corridor and offers a mix of urban and rural settings as it goes through the city and extends east to the countryside.

On the west edge of Lincoln in Pioneers Park, eight miles of trails wind through tallgrass prairie, woodlands, wetlands and along a stream. Visitors will also see bison, elk and white-tailed deer. Horseback riders can follow a 2.6 mile trail in Pioneers Park or ride a wooded trail in Wilderness Park.

In a review on AllTrails.com, Brooks Brenton says this about the Wilderness Park Trail: “Wilderness Park is my favorite trail system in Lincoln. The park is huge! At over 1,400 acres, you will never run out of new places to explore. The park is primarily unkept wilderness, and although it is wedged between a four-lane highway and a set of railroad tracks, it is easy to forget you are only five miles south of downtown Lincoln. The trail system winds through dense woods and oak groves along the banks of the Salt Creek. The dirt paths are marked for hiking, biking, horseback riding and multi-use. Wilderness Park is a great place to feel like you left town without actually leaving. Perfect for catching a glimpse of some wildlife and getting away from it all for a while.”

As more people use the trails, the city wins more grant money, making multiple trail projects possible. The Recreational Trails Program is funded by the Federal Highway Administration and administered by the Nebraska Game and Parks Commission. The program requires applicants to provide a 20 percent match, and the Great Plains Trails Network has raised millions of dollars toward trail enhancement.

The downtown N street bike lane was also partially funded by grants and allows bicyclists to ride safely through the center of town.

Several new trail improvements are in the works. Stonebridge Trail in north Lincoln will provide a connection with the Stonebridge development north of Interstate 80 between Humphrey Avenue and Alvo Road and east of 14th Street. It will also connect Schoo Middle School in Fallbrook with Kooser Elementary at 7301 N. 13th St.

Another project in the works is replacement of a bridge in the south end of Wilderness Park that collapsed in 2009. Funding comes from a federal grant through Nebraska Game and Parks as well as the Trails Network.

The largest project will make it safer for bicyclists to ride on the Jamaica North and Rock Island trails in southwest Lincoln. The plan includes a pedestrian overpass that will connect the two trails west of Densmore Park; the project is expected to be completed in 2020.

It is estimated that Lincoln’s trails are home to more than 1 million treks each year. The city Parks and Recreation Department says as many as 2,000 walkers, joggers and cyclists may be using trails on a given summer day. Trail counters are funded by the Great Plains Trails Network and the Partnership for a Healthy Lincoln and provide data that is used to design trails and roads.

Another incentive to get out and ride is BikeLNK, which rents bikes for sightseeing or exercising. Riders can rent the bikes at kiosks in downtown and near university campuses. Users pay with credit or debit cards, or through a smartphone app that allows for a cash option. See bikeLNK.com.

The Jayne Snyder Trails Center and Union Plaza Park at 250 N. 21st St. is home to one of the stations and offers access from its hub to many Lincoln trails.

Lincoln has been designated a Bicycle Friendly Community by the League of American Bicyclists. For more information about bicycling in Lincoln, go to lincoln.ne.gov and type “bike” in the search box or see Great Plains Trails Network at gptn.org.