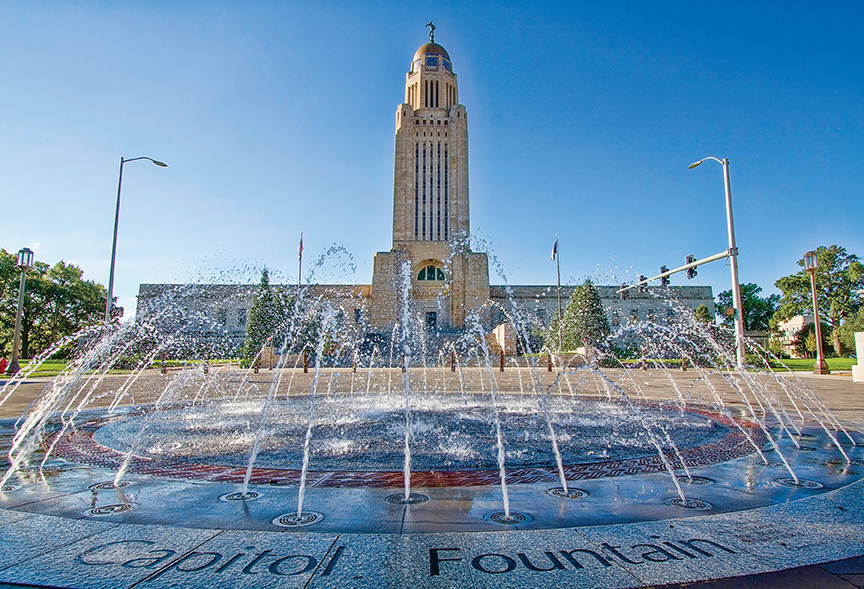 As Nebraska celebrates its 150th anniversary in 2017, its people can also celebrate and enjoy the total renovation of one of the state’s shining jewels: Nebraska’s Centennial Mall. The ‘new’ mall, which connects the State Capitol on the south to the Nebraska Historical Society and the University of Nebraska-Lincoln campus on the north, was dedicated last fall.

The mall and its Spirit of Nebraska Pathways reflect the design of the Capitol building as they tell Nebraska’s story. “It’s a way to connect Nebraskans to their state,” said Susan Larson Rodenburg, organizer of the Lincoln Parks Foundation campaign that raised $9.6 million for the renovation.

Granite and bronze plaques along the 10-foot-wide pathways at either side of the mall feature Nebraskans prominent to the state’s history. The Lincoln Parks Department’s JJ Yost said QR codes on many of the plaques take visitors to a website called Education on Location, where they can learn more about the Nebraskans featured on the mall. As technology advances, the QR codes will be updated with the latest means of connecting to additional information.

The block between K and L Streets on the south feature the State Seal Fountain and Runnel Fountains that cascade down both sides of the plaza steps.

The block between L and M is home to a series of fountain jets that outline the path of the Missouri River.

The block between P and Q, adjacent to the Lincoln Children’s Museum, features the Imagination Plaza Fountain with multiple jumping jets of water.

The original mall, which runs from K Street to R Street, was built in honor of the state’s centennial in 1967. Beautiful at the time, it gradually became a victim of Nebraska’s weather. Pebbled sidewalks cracked. Trees outgrew their planters and died. Fountains stopped functioning and had to be filled in.

Rodenburg said she and the others who led the campaign to renovate the mall wanted the space to connect Nebraskans to their state’s history. A granite plaque for each of the state’s 93 counties is one way that happens, she said.

The first phase of the project—refurbishing the three blocks of the mall that are open to vehicular traffic—began in 2012, while the fundraising was still underway. “We were confident we’d reach our goal,” Yost said, but the renovation was a “pay as you go” project. So once the first phase was complete, the project was on hold until more funding was available.

The second phase made improvements to the two blocks at the south end of the mall, near the Capitol —including a huge map of Nebraska that highlights its geographic regions, rivers and trails—and at the north end, where the circle of lights and the landscaping recognize Nebraska’s Native tribes.

The 10-foot-wide walkways on either side of the mall connect the Capitol to the campus and are entirely accessible to those with disabilities, eliminating the steps featured in the original mall. Instead of the pools and fountains in the old design, the new water features send their water to be filtered and recycled immediately—“much safer and easier to maintain than pools,” Yost said.

“It has been our goal from the start of construction to have the mall renovation work completed and opened for public access in plenty of time for the state’s sesquicentennial celebration,” he said.

And, just as Nebraska’s iconic Capitol was paid for when it was completed in 1932, the Spirit of Nebraska Pathway and its landscaping have left no debt behind. Funding from the state and the county plus tax increment financing paid for about half of the total. Private donors covered the rest.

Early in the renovation campaign, Rodenburg said, “my father, Roger Larson, worked tirelessly to raise money. He used to say, ‘When it’s all done, it’s going to be beautiful, substantial, educational and a source of pride for all Nebraskans.’

“He passed away in 2013 and won’t be able to see the final product,” she added, “but I think what he said is true.

People from all over the Nebraska—as well as visitors here—will be able to learn about and enjoy Nebraska’s history as they walk the Spirit of Nebraska Pathways surrounded by literal and symbolic reminders of the best of Lincoln, Nebraska and the Great Plains.