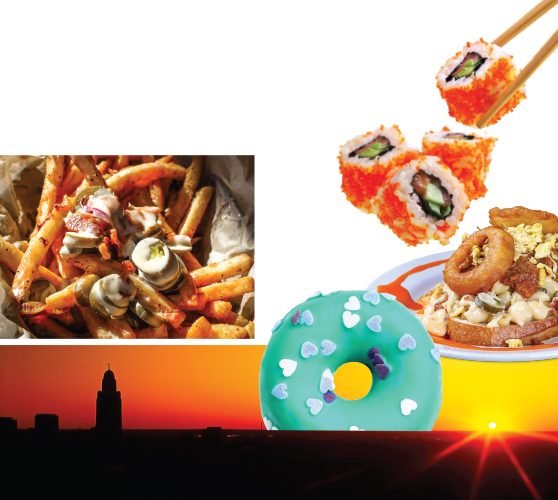 As a self-proclaimed foodie, I like to eat pretty much whenever I am awake, and with my schedule, I am awake often. Currently, I’m wrangling a three-year-old, working fulltime, running a small business, enjoying married life and trying to learn how to train a new puppy—so I’m awake more than I am asleep. After playing with my daughter, walking the dog, and answering work emails, I sometimes find myself finally getting around to dinner well after the normal dinner hours. My busy and unpredictable schedule has led me to eating at some pretty odd times of the night, but it has also helped me to discover a few late night gems in Lincoln.

Blue Sushi Sake Grillis located in the historic Haymarket and is just a few blocks from my apartment in central downtown Lincoln. They serve a variety of delicious and creative sushi including specialty nigiri, sashimi, maki and both raw and not raw sushi rolls, so you can’t go wrong. The crunchy cabbage is one of their featured “not raw” sushi rolls and it’s my go-to. It holds up well if you can’t eat it right away, something I have learned to master as a new parent. If you’re looking for more than sushi (I know it happens) they also feature a great menu of shared plates and starters. My favorite is the edamame hummus which is served with curry crostini. Some nights I order this before I leave work, pick it up and eat it later that night; it’s simple and delicious. Blue is open late most nights of the week and has late night happy hour Friday and Saturday nights from 10:30pm – midnight.

Pro-Tip: Order extra curry crostini if you order the hummus. They are hands down the best part of the dish.

You can’t write about late night eating in Lincoln and not mention D’Leons Mexican Restaurant(multiple locations throughout the city). D’Leons is as much a part of Lincoln as the Nebraska Cornhuskers. Anyone who went to college in Lincoln or spent one late night on O Street, has found themselves in one of the many D’Leons’ drive-thru lines. Most D’Leons locations are open 24/7 and they all serve up fresh, authentic Mexican cuisine. Their menu has everything from traditional burritos, tortas and tacos to non-traditional super fries (French fries covered in carne asada, pico de gallo, guacamole, sour cream and cheese). Or if you want a breakfast twist, the Lincoln Burrito (eggs, bacon, potatoes, sour cream and cheese) or the Chorizo Special Burrito (eggs, Mexican sausage, potatoes and cheese) are winners every time.

“Don’t Ask, Just Believe” is the mantra of Lincoln’s 24/7 diner, Hi-Way Diner, located on Nebraska Highway 2 in south Lincoln. Serving breakfast all day, (the third egg is free) the Hi-Way Diner is popular among college students, night owls and those who work the night shift. Their huge breakfast menu features favorites like the Haystack (two eggs over hash browns, sausage gravy and Magic Toast) and hot sandwiches like the Hot Stripper (three chicken strips with sausage gravy served open faced on grilled Texas toast). The Hi-Way Diner also serves up traditional diner classics like hamburger steak, chicken fried steak, and liver and onions, as well as soups, salads and plenty of sides to accompany anything you order.

If you are up late (or early for that matter) and have a sweet tooth, Lincoln’s latest sugar addiction is Hurts Donutin the historic Grande Manse building on N. 10th Street downtown. Hurts describes themselves as “open 25 hours a day, 8 days a week” and serves up creative round morsels of sugary goodness, also known as donuts. From extreme flavors like the “Chubby Elvis” (banana cream filled with chocolate and peanut butter and topped with bacon), Oreo cheesecake and cosmic brownie to seasonal favorites like Pumpkin Spice Latte, Hurts has you covered in the delicious donut department. Pair your donut with a carton of milk or a fresh coffee and you’ll have yourself a combination made in heaven.

As of March 19, 2016, Lincoln has had a crack addiction, well kind of, a crack fries addiction. Named one of the “Top 10 French Fries in America” by Food Network Magazine, the crack fries at HopCatin downtown Lincoln are delicious and addicting. I sometimes wonder if my insurance would cover rehab for this type of addiction. Not only are the fries to die for, the 132 taps of beer from across the world, including 30 selections brewed right here in Nebraska have me hooked on HopCat. The restaurant is new to the Lincoln scene, but I’ve found myself there often sampling one of the many beers available and ordering something new off of their vast menu. From beer cheese soup and loaded pretzel nuggz (pretzels topped with bacon, red onion and pickled jalapeno and smothered in warm cheese sauce) to beer battered fish and chips to one of the burger/sandwich varieties, HopCat has a great menu to pair with its huge list of beers. What’s the best part of visiting HopCat? Their kitchen is open late and you can order food up until ten minutes before they close.

Pro-Tip: HopCat’s brunch on Sundays from 10-3 is killer! You can’t go wrong with the make-your-own bloody mary bar, and the mac and cheese will be the sinful part of your Sunday. It features gooey mac and cheese on Italian sourdough with bacon and jalapeno peppers, layered with more cheese, BBQ pulled pork, onion rings and a scrambled or poached egg on top. You better head to church before you order this meal.

Lincoln has no shortage of eateries and food trucks open late. These are just a few of my favorites, but I know there are plenty more to explore. My favorite ways to learn about new places to eat include asking at your hotel, asking your host or referencing apps like Yelp. Lincoln has a lot to explore and I encourage you to stay up late, expand your waistband and start your Capital City late night tour.