Without Ice Cream There Would be Darkness & Chaos 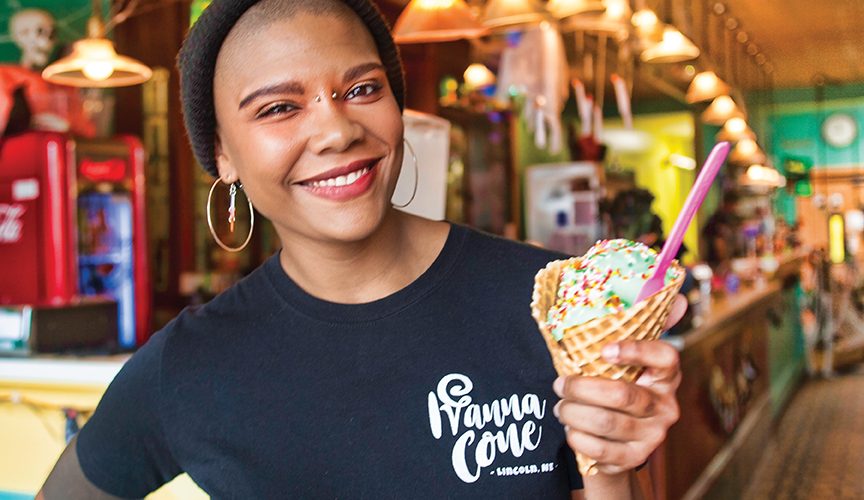 Many Lincoln restaurants feature ice cream desserts, and the best you’ll find is the toasted coconut at Blue Orchid, but let’s really dig in to where you’ll want to go to when ice cream is going to be the appetizer, main course and dessert.

A long time Lincoln mainstay is Ivanna Cone. If you’ve lived here long enough, or if Lincoln was a destination visit 22 years ago, you’ll know that this was originally a Ted & Wally’s spot. At that time, the historic building had just been renovated and they were the first tenant to move in. When the owners wanted to focus on just their Omaha store, they sold to their longtime location manager, Amy Green. Amy has owned and operated Ivanna Cone since 1997.

They are known for their made-on-site ice cream and inventive flavors. You’ll always find Sweet Cream Vanilla, Dutch Chocolate, Strawberry and Cinnamon on the board. After that, you’re as likely to find Butter Pecan as you are to find Bourbon Oatmeal. Once in a great while you will stumble across a fun experiment like Pizza. They try to always have sorbets and vegan ‘creams’ as well. Their nonprofit branch, Community Cone, creates flavors to go alongside fundraising for community programs and nonprofits. Their website is ivannacone.com.

Another Omaha-Lincoln double location is Freezing. After opening in Omaha early in 2018, it made the jump to downtown Lincoln in June of the same year. This place stands out because of their traditional Thai rolled method. Milk is poured onto a frozen counter, flavors and items are mixed in, and then strips are rolled up and the bouquet goes into a dish. Their flavors are less sweet and much subtler than some are used to eating. Half the fun is the experience of watching it get made before your eyes.

There are 13 standard flavors with seasonal ones added as they think them up. Popular options are Monkey Business with peanut butter and banana, Giant Green made with matcha tea powder, and Mango, which is exactly what it sounds like. Go to www.freezingne.com for more information.

A little older than Freezing, 402 Creameryopened in September of 2017. It tested the waters by serving out of LuLu’s on N Street before settling in the Haymarket. Tyler Mannix traveled across the U.S., falling in love with ice cream along the way, and wanted to bring some of that magic back home to Lincoln.

As part of his commitment to quality production, he sources local ingredients, and has a two-day freezing process. His flavors are vibrant but not too wild, and favorites include Almond Brittle with Salted Ganache, Coffee Toffee Caramel, and Fudge Brownie. Tyler and his wife Jerrica hope to become as much of a known name as the next beloved Lincoln shop. Go to 402creamery.com for more information.

Zesto’sstory takes some twists and turns as the name has been used by many people across America. For Lincolnites, the name is a reminder of the iconic location on South Street. It’s been a staple of Lincoln since 1950 and the owner, Linda Rediger, took over operations in 2008 because of the nostalgia. The secret in Lincoln is the storefront across from Southwest High School.

You’ll find a wide range of flavors for toppings and shakes, from black raspberry to butterscotch, and cherry dip to krunch-kote (candied nuts and rainbow sprinkles). They do seasonal flavors, so look for Summer Strawberry, Pumpkin and Peppermint Stick.

It’s not ice cream, but they also have a pretty famous burger that’s gone around the U.S. as much as their name. You might know it as a Tastee, Made Rite or Yum-Yum, but it’s all of those things and more.

The only ice cream more iconic than Zesto’s is a scoop from the UNL Dairy Store. It opened in 1917, close to a milk barn that hasn’t stood the test of time. Back then, bringing a nickel and your own cup would get you all the milk you could drink. UNL’s agricultural programs supported students living in the dorms. By 1954, students were working in the store itself too.

From those programs, they began to sell to the public their meats, eggs, honey, cheeses and a lot of ice cream. You can still get all of those items now and they release specialty boxes right before the holidays for gift giving. No matter why you stop in, the main attraction is at the freezer case. Their specialty flavor, Scarlet and Cream, has a white strawberry base and a fresh strawberry swirl throughout. Outside of standard flavors, they have a rotating selection. Go to marketplace.unl.edu/dairystore/gift-boxes/ for gift ideas.