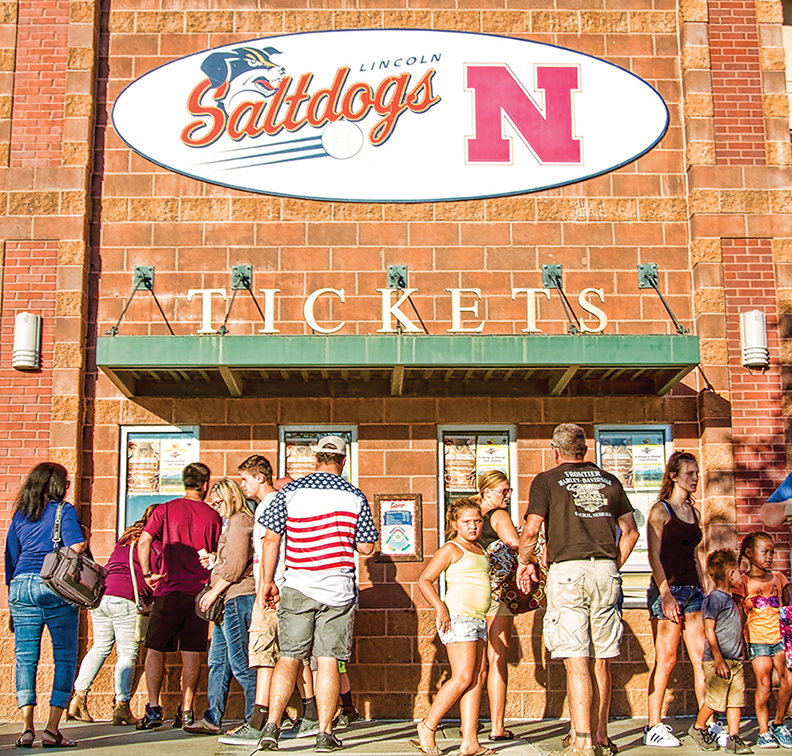 It’s no secret that in the heart of the Heartland stands a shrine to college football like few other in the nation. When driving into Lincoln from any direction, it’s hard to miss. Memorial Stadium sits high above the landscape, standing out as one of the few tall flowers in a desert of flatland.

Lincoln is a football town in the middle of a football state, and yet not too far away, set back just west of the University of Nebraska-Lincoln’s campus, sits another beautiful stadium, Lincoln’s ode to America’s pastime— Haymarket Park.

Opening in 2001, Lincoln’s Haymarket Park, home of Hawks Field, can seat up to 8,500 fans. Haymarket Park is home to both the University of Nebraska Huskers baseball team and the Lincoln Saltdogs, a professional team in the American Association of Independent Professional Baseball (AAIPB) league. Fans for both teams have created quite the home field advantage over the past 15 seasons. The Huskers have earned a winning record in every season since they moved into the ballpark in 2002. The Saltdogs accomplished the same feat between 2001 and 2014.

But baseball fans in Lincoln aren’t just proud of their teams, the ballpark itself has also proven to be a point of pride. Hawks Field has been selected as the “Best Playing Field” every year among AAIPB ballparks. It was also named the Baseball Field of the Year in the College/University division by the Sports Turf Managers Association (STMA) in 2003 and 2007, and remains the only college ballpark in the nation to win the award twice.

The excitement starts each year in early spring with Husker baseball. Although the cold temperatures of the Midwest often force the team to play on the road in late February and early March, the crew at Haymarket Park always has the field ready for the first home stand. One of the more unique things about the ballpark is that it features a heated playing surface, which allows the grounds crew to melt any late, unwanted snow. This definitely comes in handy given the unpredictability of weather in Nebraska.

Each year, as the weather warms up, Husker fans come to the ballpark in droves and turn Hawks Field into a “Sea of Red.” Aside from the nice weather, games often feature giveaways and contests to increase fan excitement. Students can be seen supporting their team by filling the Berm Zone, a grassy section in the outfield where they enjoy free admission to games with their N-card.

The 2017 season will mark Nebraska’s sixth year in the Big Ten. The Huskers have enjoyed success in their new conference, tallying a winning record in four of their first five seasons with a winning percentage of .605 in conference play. The Huskers are led by two-time MLB All-Star and former Husker standout Darin Erstad. The Huskers have shown promise under Erstad’s leadership, qualifying for the NCAA tournament in both 2014 and 2016, and they hope to continue that success in the spring.

After the Huskers’ season wraps up, the Lincoln Saltdogs move into the park and play home games from May to September. Although members of Saltdogs are professional players, the team is not affiliated with any team in the MLB. Instead, fans get the opportunity to see young talent as players try to earn their way on to a major league roster.

Saltdog games feature fun for the whole family. Haymarket Park has a playground along the right field line for the kids, and Homer, the Saltdogs’ loveable mascot, can be spotted at all home games. There are on-field promotions between innings to encourage fan participation. Fans can also choose from attending one of the many Saltdogs promotional nights, including Dollar Beer and Pepsi Nights on Thursdays, Fireworks Fridays, Souvenir Saturdays or Sunday Fun Days throughout the season. If you have a large group, you can even reserve the Home Run Terrace out in right field and enjoy private service with a great view. For more information regarding tickets or promotions, make sure to check out saltdogs.com or calling (402) 474-BALL (2255).

Lincoln has changed a lot in the last 15 years, but Haymarket Park remains a top-tier attraction for fans of all ages. Whether you’re a die-hard baseball fan hoping to root on the home team or simply looking for a way to enjoy the beautiful weather, Lincoln’s Haymarket Park has a little something for everyone.

So this spring, when the weather gets nice, grab a friend or family member and head down to Haymarket Park. While you’re there, make sure to take in the sights, sounds and smells. Let all your worries go, if only for a few hours, and get lost in the moment. Somewhere between taking that first glorious bite of a ballpark dog with all your favorite fixins’ and singing during the seventh inning stretch you’ll see just why America’s pastime has a bright future here in Lincoln.