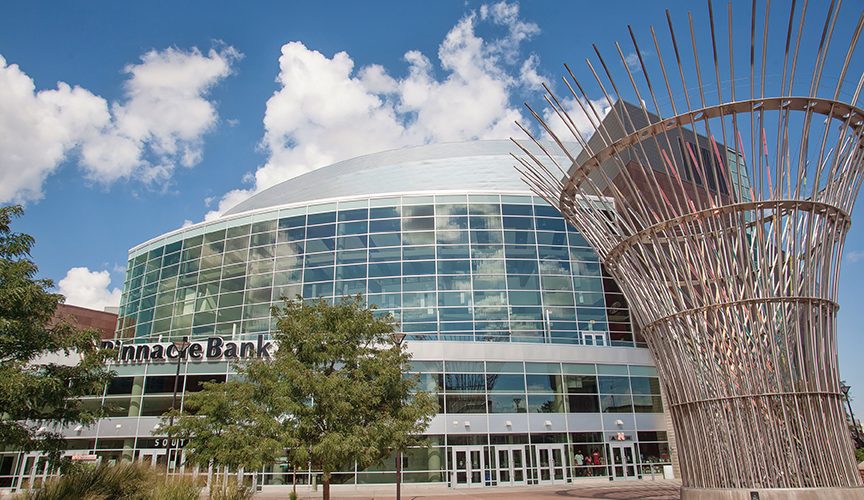 Less than a decade ago, the space just west of Seventh and R streets in Lincoln’s Haymarket was a tangle of railroad tracks. The only traffic was the multiple freight trains and the twice-a-day Amtrak passenger service that used the tracks.

Today, that scene has disappeared, replaced by the shiny Pinnacle Bank Arena. And the traffic includes the likes of Paul McCartney, Garth Brooks, P!nk and the University of Nebraska basketball teams—and their thousands of fans. It’s as if the people of Lincoln had waved a magic wand.

It may, indeed, seem magical, but the transformation is the result of vision, cooperation, commitment and hard work from the Lincoln community and its leaders. The big-name concerts, the basketball games and tournaments and the major civic events held within its shimmery walls bring magic to more than 750,000 people a year, according to Tom Lorenz, general manager of the arena.

Michael Bublé kicked things off with a sold-out show—“not just a concert but a show,” Lorenz said. Bublé was followed by the likes of Elton John, Bon Jovi, the Eagles, Jason Aldean and Jay-Z—a series of 10 shows in 80 days.

Since then, artists like Paul McCartney, James Taylor, Def Leppard and Billy Joel have packed the house as the arena has offered 12 or 13 shows each year. Garth Brooks sold out five consecutive shows in October 2017, drawing more than 68,000 fans.

And the crowds keep coming, pushing Pinnacle Bank Arena to the top tier in national rankings of arena venues. “Lincoln wasn’t a ‘must stop’ for concert tours in the past,” Lorenz said. “It is now.”

“Word gets around among the agents, entertainers and production crews,” Lorenz said.

Lincoln Mayor Chris Beutler said the arena and other West Haymarket projects “have brought even more people into downtown,” helping to enhance the city from the Haymarket on the west all the way through the traditional city core and Antelope Valley to the new Telegraph District on the east.

They come not only from Lincoln but also from a wide radius around the city, Lorenz said: from Omaha, from western Nebraska and from surrounding states.

Of course, something as big and magical as a 16,000-seat auditorium can’t be just conjured up like a rabbit out of a hat.

The arena’s design, by DLR Group of Lincoln, offers “an iconic look with mass and size,” Lorenz said. “But it’s not overwhelming at the street level” where a masonry face blends with the rest of the Haymarket. The next levels up are bronze steel panels, then precast concrete, and the silvery top is zinc.

The city also added a 2 percent tax at bars and restaurants, dedicated to the arena project. Revenue generated by tickets, concessions, rent and parking in the adjacent garages is also subject to the turn-back tax. And Lincoln’s Pinnacle Bank ponied up $11.25 million for a 25-year claim to the arena’s name.

The project’s leaders promised the people of Lincoln the arena would be done on time and under budget, and it was. They also promised that the arena and the accompanying expansion of the Haymarket would generate millions in private investment. And it’s happened, Lorenz said.

WRK Real Estate of Lincoln and Chief Industries of Grand Island made up the bulk of the initial investment, but since then three new hotels, a bunch of condos, office buildings for Olsson Associates and Hudl plus a lot of remodeling of the original Haymarket buildings have more than surpassed the $70 million expected. And in summer 2018, Olsson announced plans to expand its already significant headquarters building.

“Lincoln leaders took time to build a wonderful anchor arena in the right place,” Lorenz said. “We are well positioned to continue to offer great experiences for years to come. The Pinnacle Bank Arena and surrounding district will continue to grow as destinations for fans and patrons from all over the Midwest.”