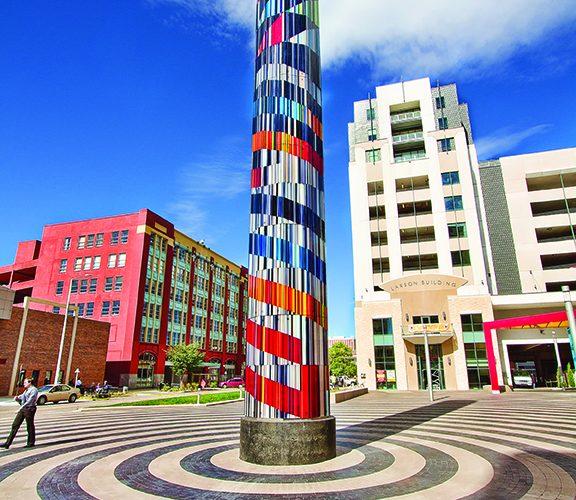 As recently as 2003, downtown Lincoln was described as “OK” but certainly not as “vibrant” and “energetic.” The Pinnacle Bank Arena was still on the drawing board. The burst of development in the historic Haymarket and downtown districts hadn’t been fully imagined. There was no Canopy Street (now almost the western edge of downtown and the Railyard entertainment district didn’t exist.)

Neither did noted ceramic artist Jun Kaneko’s 57-foot-tall multicolor glass tower and the surrounding civic plaza at 13th & P streets. The old federal building at the corner of 9th & P streets, now The Grand Manse, was not yet home to the Blue Orchid Thai restaurant, nor live jazz in the Boiler Grand Ballroom.

Brewpubs and microbreweries were counted on one hand, as were downtown hotels. Sports tech company Hudl didn’t exist.

The long-discussed Antelope Valley project was in its early stages. When it wrapped in 2016, the changes to the physical appearance of the area just east of downtown were dramatic. Removing flood plain constraints has prompted nearby redevelopment.

Centennial Mall (14th Street) extending north from the State Capital was crumbling, but renovated in time for Nebraska’s 150th birthday party in 2017.

Downtown Lincoln has evolved and there’s more to come.

Though The Mill has been part of downtown since the mid-1970s, for locals it has always been in the Haymarket at 8th & P streets (since 1988). “That’s when we became an espresso bar rather than a specialty coffee shop,” said Dan Sloan a co-owner since the 1990s. “It was lonely down here then. We thought the Haymarket might develop into something, sometime, but no inkling of what it would become.”

Sloan thinks the Haymarket district has gone through two major changes. First was finally getting enough bars and restaurants for it to become a destination with “lots of energy” (mid-1990s).

The second was a result of several things—Pinnacle Bank Arena was built and the University of Nebraska joining the Big 10 Conference in 2011. “And as a result, all the hotels that were built down here brought more people. That was a seismic change,” stated Sloan. “The arena enticed people to come early. They saw how nice it was and went to the bars and restaurants; then started coming even if they weren’t going to the arena.”

“Many people from out of town are pleasantly surprised—this isn’t the sleepy Midwestern town they were expecting,” he observed. What the very walkable downtown needs, though, are a few more retail shops. “People need places to wander through. There are some great little shops near 13th & O streets. Selfishly, I’d like to see some more of that in the Haymarket.”

Francie & Finch Bookshop at 130 S. 13th Street is one of those shops. Leslie Huerta opened it in the historic Telephone Exchange building in 2016. “Independent bookstores,” she explained, “Fit well in an urban area with a strong community to back them up. That’s downtown Lincoln.” The “incredible live music scene, like jazz at the Tower Square,” is one of Huerta’s favorite things about downtown. Monthly First Friday events always attract fun-lovers. There are galleries near the shop, making it one of several go-to downtown destinations for art [and book] lovers.

Now the Canopy Street Market at 140 Canopy Street, the only full service grocery store in the Haymarket and downtown, is open. Fresh produce, prime-grade meats—including grass-fed Nebraska beef and, if you’re lucky, corn-fed Nebraska-raised shrimp—plus an impressive array of freshly prepared food fromtheir deli is available. Besides the usual grocery stores items, they offer a wide selection of wine, beer and liquor. You can also find local specialty items like Le Quartier breads, High Society cheesecake and Valentino’s spaghetti sauce. The market  even offers pickup and delivery at 402-413-0909. There’s street parking, but the nearby parking garage makes it really convenient.

Eco-friendly bikes rolled onto the downtown streets in April 2018. These bicycles for shared public use have already logged over 12,000 trips. To ride (even in winter), go to a one of 19 bike kiosks with bikes available. Use the BCycle app on your smartphone, membership fob at the bike dock, or a credit card to pay. Wait for the signals, and when the bike unlocks, you’re ready to ride for 30 minutes, then return it to any kiosk that has an open dock (www.bikelnk.com).

Near a bike kiosk in the Haymarket is Licorice International (803 Q Street), a Food Network Magazinetop 50 candy store in the U.S. Relocating their retail and online business to a bigger space in the Haymarket made sense to business partners Elizabeth Erlandson and Ardith Stuertz and they’ve never regretted it. “That was in 2005, before any plans for the arena and the Railyard entertainment area. The Haymarket has changed dramatically, and we’re thrilled with the improvements to parking, lighting, sidewalks, pavements, etc.,” recounted Erlandson. Licorice International is very browsable, and popular for its free samples. “Out-of-town customers often comment on how clean the city is; what fun it is to see the older buildings being maintained so well and, of course, they often mention how nice the people in Lincoln are,” she said.

If exploring downtown on a Segway sounds interesting, Lincoln Segway Tours (17th & M streets, lincolnsegwaytours.com) can help with that. This new seasonal family-owned venture kicked off in May. Although co-owner Jim Harrison noted, “Segways and snow don’t mix.” Two tours are available and include Segway 101 for novices.

The ‘Ride & Glide’ Segway tour will take riders by a new downtown redevelopment zone—the Telegraph District on the east near 21st & L streets. When approached about opening a fourth location in an old repurposed building, the owners of The Mill said yes. “Much like our original location in the Haymarket, we thought we were coming in too early,” explained Dan Sloan. “But we thought we could ride it out until it developed into something… that second downtown hub.” The store has already developed faster than expected. “It’s becomea cool, safe community gathering spot, and that’s what the Telegraph District has turned into almost immediately.” Full service restaurants, bars and retail businesses are being actively recruited for area. Coming soon will be housing near 21st & N streets for people who don’t want a large footprint to maintain.

Having the State Capital and the University attached to downtown Lincoln has kept it viable. There are countless opportunities for commerce. It’s vibrant. It’s a destination.