Cultural Centers, Together We Are Lincoln 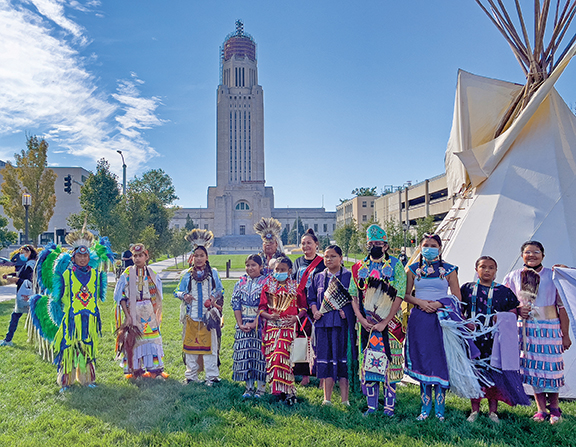 Shahab Bashar didn’t know where to go when he arrived in Lincoln after escaping ISIS in 2017. He didn’t speak English. He had a wife, a two-month-old daughter, no money, no job, and nowhere to live.

He was terrified. And yet, he was lucky, he said.

It took him months to find a job to help pay bills and find a home for his family. Ultimately, it was a friendly face at Lincoln’s Yazda-Yazidi Cultural Center—a man who spoke his language—who first helped him find his footing.

Bashar got the job. Then an apartment. He visited the Yazidi Center every day, speaking to people in Kurdish, asking for help with his mail, his bills, and interpreting current events. He came back so often that, eventually, they offered him a job too.

Mr. Bashar is now the co-director of the Yazda-Yazidi Cultural Center in Lincoln, and is an advocate for the thousands of refugees that walk through its doors each year.

“Now I am finding jobs for people,” he said.

Bashar’s story is an inspiring one, and he stands for the thousands of immigrants, refugees, and culturally diverse people who call Lincoln home. Like Shahab Bashar and his family, many of these people are looking for a place that reminds them of their home, their birth-culture, and somewhere that can help them better assimilate into a country that’s foreign to them and help them learn a language they can’t yet understand. These people come from all around the world and could be first, second, or third generation immigrants who are looking for a place in Lincoln to feel at home in their culture.

Lincoln’s cultural centers are not only a tool to help the many immigrants and refugees who call our beautiful city home, but they are also a celebration of how magnificently diverse our city is and how proud so many people from around the world are to be living here.

We are blessed to have the following cultural centers and the people they serve in our city.

Like Shahab Bashar said, the Yazda-Yazidi Cultural Center (YCC) on North 27th Street has been a saving grace for him—a second home—as he transitioned from his life in Northern Iraq to the United States. He loves it here, and thanks the Center and the people who have helped him every day.

He said that while it was difficult to transition—especially his wife, who initially wanted to move back to Iraq due to the culture shock—the Yazidi Cultural Center has helped them both feel like the United States is their country too.

“My wife has American flags around the house now,” Bashar laughed.

YCC is part of a larger national organization called Yazda, which is dedicated to providing a loving community to the Yazidi victims of enslavement, violence, and displacement. Its presence in Lincoln has helped it become home to the largest community of Yazidi refugees in the world, and the small team at YCC has been quintessential in helping to teach them basic American rights and prepare them for citizenship. The team also provides English and Kurmanji (Northern Kurdish) classes to integrate refugees into American culture while helping them feel connected to their own.

Bashar also said the Center helps all types of people: Arabs, Kurds, and is even preparing for an influx of incoming Afghani immigrants as well. They help with paperwork, translations, doctor appointments, and anything immigrants to Lincoln might need to feel more at home—an estimated 1,500 people a year.

YCC isn’t the only home for refugees in the city. Located at 144 N 44th Street, the Asian Community and Cultural Center (ACCC) provides a community for Asian-Americans and immigrants to join together and share their cultural heritage and promote each other’s well-being. ACCC, established in 1992, boasts bilingual staff and, since 2006, serves as a hub for all recently arrived refugees, regardless of national origin.

The Malone Community Center (MCC), located at 2032 U Street, is dedicated to strengthening and empowering the Lincoln African-American community since 1955. They’ve been successfully helping African-American youth, women, and men with the resources, community, and care they need for prosperity through educational, cultural, and advocacy programs for decades.

That long-standing dedication for seeing Lincoln’s African-American community thrive is seen in the rich diversity and care given to their support programs and initiatives. Among these is Hold Cops Accountable (HCA), which gives the community a chance publicly voice their concerns or give commendations concerning Lincoln’s Police Department. The programs also include the Maternal Wellness Program for helping Black mothers overcome the disparities in maternal health while providing culturally competent care; Project Uplift, which supplies free legal council for civil matters; Take Pause, which fosters healthy relationships between Black teens and the police department; and several out of school and educational programs for Black youth.

MCC is always accepting volunteers, as they believe a community is best built together.

El Centro de la Américas, located on 210 O Street, has, for over 35 years, provided education, family support, youth empowerment, health and help navigating resources for Lincoln’s Hispanic community. It is a center that revels in a celebration of Hispanic culture from all origins—Mexico, Puerto Rico, El Salvador, Cuba, Guatemala, Spain, and the many other Spanish-speaking countries worldwide.

In addition, El Centro celebrates Latin culture with a yearly cultural festival with traditional music, art, and food. They also host an event called Wine, Chocolate, Tango, & Tapas!, which is postponed until after COVID restrictions are lifted.

The Indian Center on 1100 Military Road was formed in 1969 to provide services to Nebraska’s Native Americans in food, housing, culture, employment, and health. The Center is a hub for people of Native descent to celebrate their culture, be with fellow tribe-members, and engage with each other through community and mutual support.

The Center hosts projects tailored for youth empowerment, including Indian child welfare, Native American Junior Achievement, and summer youth programs. Other activities include an art exhibit and legendary annual pow-wows in Lincoln. Every summer the center hosts a fabulous pow wow where native families come from all over the region to enjoy a celebration filled with great food and music that is very important to their heritage. Non-native folks are welcomed to join.

It’s clear that Lincoln is a place built on community, and a sense of love and respect for each other, our differences, and what binds us together. These community centers prove that our city is beautiful because of the mosaic of cultures that reside here, and even better because of the good hearts that make moving here from across seas—or simply across cultures—possible.