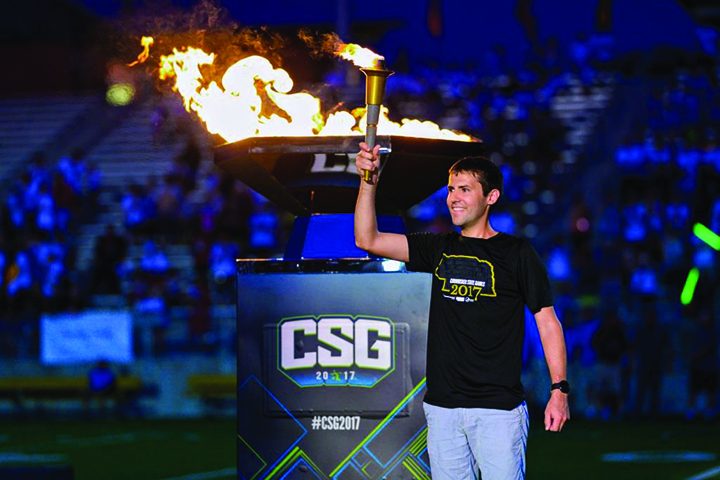 More than 10,000 Nebraska athletes converge in Lincoln each July for competition in more than 60 sports at 45 different venues. The July family tradition known as the Cornhusker State Games brings folks together from more than 85 counties. Before fanning out to play at 45 different venues, they all gather for the Olympic treatment at opening ceremonies at Seacrest Field.

But outdoorsmen and women competing in archery, fishing and nine different shooting sports show their stuff too, alongside kids and young adults in trendy offerings like BMX racing and jiu-jitsu. Throw in badminton, chess, fencing, foosball, disc golf, table tennis and sailing and you have yourself a broad mix of ages and interests.

“The variety of sports, and the fact that athletes come in from 300 different towns, are what make the Games unique,” said Executive Director Dave Mlnarik.

While the variety provides the spirit, 100 sponsors and some 2,000 volunteers power the engine that runs the Nebraska Sports Council, a non-profit organization that hosts the Games without public funding. The effort is worth it from a business standpoint—the Games generate more than $7 million for Lincoln’s economy annually.

But, Mlnarik said, the underlying mission is to promote healthy and active lifestyle choices. The Cornhusker State Games provide motivation for thousands of Nebraskans to get off the couch or screen—and into the race, on the mat, in the pool, on the pitch, in the gym or on the range. Whatever the venue, they’re doing their thing.

The Nebraska Sports Council, which conducts the Games, also hosts a Mud Run, set for Aug. 25, a youth-only Pumpkin Run on Oct. 5. With corporate wellness in mind, the Council will also conduct its first-ever multi-sport Corporate Games in April.