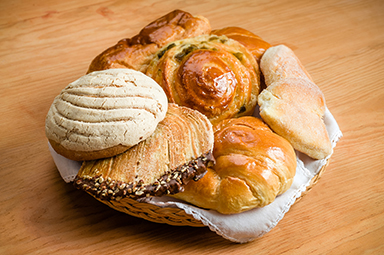 If you need a sweet treat to start your day, a bread that gives you a taste of France or Mexico or a special cake for a special occasion,
Lincoln bakers have you covered. Here are just a few of your options.

Take the five steps down into The Rabbit Hole bakery at 8th and Q streets and you’ll be ready to enjoy a sweet adventure with Alice in pastry wonderland.

Amanda Fuchser and Beau Ballard opened their cozy spot in the Haymarket in fall 2016, hoping to fill a need. Ballard’s parents own and operate the From Nebraska Gift Shop across the street and had heard frequent inquiries from visitors about where they could get a good dessert in the Haymarket.

Fuchser and Ballard, who went to high school together in Lincoln, looked at a number of locations before settling on their “underground” location as a site for those good desserts.

“We thought it was the perfect little rabbit hole,” Amanda said. A graduate of the culinary arts program at the University of Charleston in West Virginia, she is the head pastry chef at the bakery.

In addition to breakfast pastries and coffee, The Rabbit Hole offers cake by the slice and other sweets as well as dessert cocktails and wine. And Amanda bakes cakes to order, too, for weddings, birthdays or other special events.

Sometimes those events happen on site. The bakery was recently the perfect setting for a little girl’s Alice in Wonderland-themed 10th birthday party.

Fuchser and Ballard and their families made what had been just a storage cellar into a place that says “welcome” and “relax” with its dreamy, gray-swirled epoxy floor, comfy couches and tea party-ready tables and chairs.

A dozen clocks that the Mad Hatter would have loved decorate one wall and an “Alice” mural another. Bookshelves hold rows of teapots in which the Dormouse would have loved to nap—along with plenty of books, of course.

“Our customers have been fantastic,” Amanda said. “We love the culture in the Haymarket and love being part of it.”

Le Quartier has its roots in Montreal, Paris—and Hampton, Nebraska. But the fruits of its kitchen are all Europe, made with equipment designed to produce the kind of bread John Quiring learned to bake in France.

John and his brother Seth Quiring were born in Hampton and were living in Montreal in the early 2000s. While Seth worked in the corporate offices of an aerospace company, John was employed at a top-rated French bakery, learning every part of the art of baking.

At a certain point, though, John could not advance any higher in the Montreal bakery ranks unless he was French or, at least, had experience in France. So off he went for nine months at an authentic bakery in suburban Paris.

Instead of returning to Montreal after that, he decided to open his own business in Lincoln. Seth soon joined him. “We felt like we had a history here, like we understood the place,” Seth said.

At first, the brothers rented kitchen space, baking their artisan breads during the night and delivering them in the morning to several restaurants in town. Then they started selling at the Haymarket Farmers Market, and customers who grew to love what they could buy there on summer Saturdays asked local groceries to stock the bread year round.

Just a few days before Christmas in 2006, the brothers opened their first retail storefront in Meridian Park, 70th and O Streets. Two years later, they renovated and expanded their space and added a lunch menu. John continues to manage the baking, and Seth manages the business.

All their equipment is from France, Italy or Switzerland, designed to produce the kinds of artisan breads John was trained to make, a loaf one might expect to buy in Paris.

“In the store, we sell more croissants and pastries than we do bread,” Seth said. But the bread that goes to restaurants and groceries stores and the Farmers Market makes it their biggest seller, bringing a taste of France to the heart of the Great Plains.

Perhaps the all-day shopping reflects the seemingly endless variety of items the bakery offers – its website touts more than 20 varieties of breads
and 20 more of pastries—or perhaps it’s the fact that Pan Dulce—Spanish for “sweet bread”—is Lincoln’s only bakery offering Mexican breads and pastries.

Cesar Arza, Jr., who owns the bakery with his father, Cesar Arza, Sr., said his dad had been working in a bakery in Omaha 10 years ago where part of his job was delivering breads to grocery stores in Lincoln. Arza realized the capital city had no Hispanic bakery of its own, and an idea was born.

From 2008 until the summer of 2017, the bakery was on the corner of 11th and G streets, but then it moved a few doors south and tripled its space.

Now two bakers and a bakers’ assistant produce about 3,000 pieces of baked goods each day, the younger Arza said.

One of Pan Dulce’s specialties is the tres leches cake. “No one else in Lincoln has it,” Arza said of the traditional Mexican treat, a sponge cake soaked in evaporated milk, condensed milk and heavy cream.

But the “conchas,” breads shaped like shells, are another favorite of Pan Dulce’s customers. The slightly sweet dough is topped with sugar flavored in vanilla, chocolate or strawberry.

Pan Dulce also offers custom-made cakes for special occasions, and Arza said the bakers can come up with a custom birthday cake with just a day’s notice. A wedding cake, of course, requires more planning.

Arza said he and his father and the bakery’s employees love making sweet foods, fresh every day, seven days a week. They like to see their customers happy, and they love getting customers’ feedback and ideas about new items they might offer.

And the customers keep coming, streaming in for their favorites no matter what time of day.