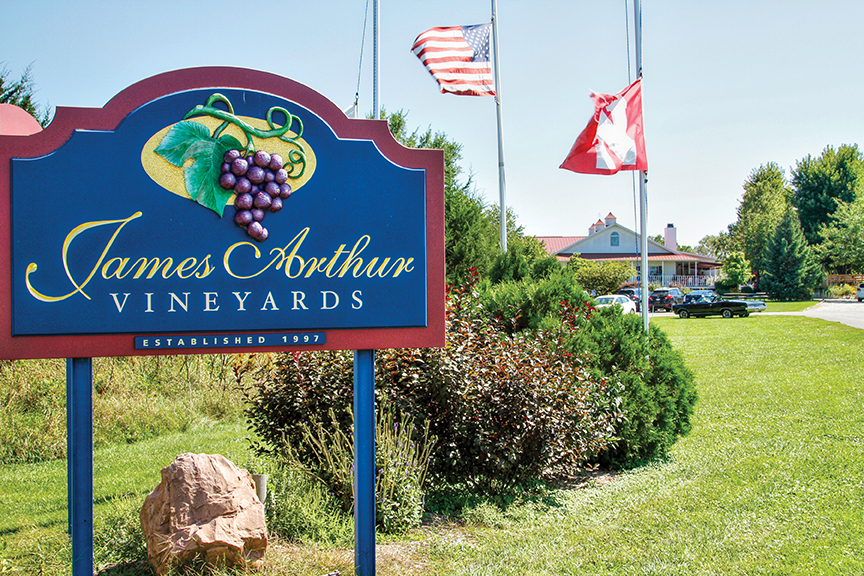 As visitors traverse eastern Nebraska during the waning months of the summer, the horizon is filled with cornstalks and soybeans standing at attention waiting for the start of another fall harvest. But if you get off the beaten path into the rolling hills north of Lincoln, at the very beginnings of what is known as the Bohemian Alps, you’ll run across the well-manicured rows of another agricultural product that seems a bit out-of-place among the more familiar Nebraska crops.

Look closely and you’ll find the purple and green dots that will soon become the sweet…and sometimes dry…elixir that Nebraska’s largest winery has been producing for past 20 years.

James Arthur Vineyards opened its doors in September of 1997. Since then the winery, located near the town of Raymond (pop. 200), has hosted hundreds of thousands of guests—including visitors from every state as well as a number of countries from around the world. However, if you look at the genesis of the state’s second farm winery, it wasn’t the vision at the very start.

“When we first stated planting grapes, it was going to be just for fun,” said Barb Ballard, co-owner of James Arthur Vineyards. “it was literally going to be a hobby.”

The idea of growing grapes was first planted in the head of James Arthur Jeffers by his son-in-law (now JAV’s head winemaker and Barb’s husband Jim) in 1992. Soon the first 100 vines, planted by hand and with tender loving care, were firmly secured in the earth. As the number of vines planted grew, so did the idea of turning the family’s hobby into an actual business. After careful consideration and researching a number of other wine industries across the country, James Arthur Vineyards became a reality.

Now, as the family steps back and surveys their 20 acres of grapes as well as the 8,000 square foot tasting room and production facility surrounded by a picturesque landscape of gazebos, waterfalls and immaculate landscaping, it’s hard to fathom what they’ve created.

“Sometimes we have to slow down and look around at all that we’ve done over the past two decades and take it all in. It’s really been an incredible journey,” said Ballard.

A pioneer in the Nebraska wine industry, James Arthur also brings in grapes from nearly a dozen other growers from across the state, making their final product truly unique to Nebraska.

“When we first opened, most people were more curious than anything about Nebraska-made wines, and weren’t quite sure what to expect,” said Ballard. “However, they soon found out that not only could we grow grapes in Nebraska and make wine from those grapes, but we could make very good wine.”

Along with producing award-winning wines, James Arthur Vineyards has also earned a reputation based on outstanding customer service and their ability to create a great winery experience through their many events on their beautiful grounds. That experience can now also be found in Lincoln’s Haymarket, with the purchase of the From Nebraska Gift Shop at 8th and Q Streets. The winery added a Tasting Room to the shop which features the best of Nebraska-made products. The winery has also added a new wrinkle to their offerings, by taking apples from
the family orchard and creating Nebraska’s first hard cider.

“Our mission from the very beginning has been to create a great product that Nebraska can be proud. And, to make sure that all our visitors have the best experience possible,” Ballard said. “Over the past 20 years, I think we’ve accomplished that…plus some.”

While being the oldest and most established winery in the area, James Arthur Vineyards is certainly not the only award-winning winery.

Started in 2001, Deer Springs Winery is also a family owned enterprise located in the eastern part of Lincoln. Retired Navy Officer Jim Partington thought growing grapes would be a perfect alternative crop to try on the family’s original homestead, so he began planting grapes.

The tasting room, which opened in 2007, is in a quaint farmhouse which was renovated to reflect the charm and simplicity of the original structure and sits on the land that was deeded to ancestor Patrick O’Halloran in 1874 by Ulysses S. Grant. The winery is surrounded by pine trees, giving it the peaceful atmosphere of days gone by, while still providing the contemporary comforts.

Partington’s daughter Jennifer Reeder is the winemaker, and has created a plethora of wonderful tasting, award winning wines that are distinctively Nebraskan. Located at 16255 Adams Street, the winery features live music on the weekends with a bucolic backdrop of unique this winery.

WindCrest Winery, also located north of Lincoln near Raymond, has made the transition from primarily being a grape grower to producing and selling their own wines.

When James Arthur Vineyards begin looking for growers in the late 90s, Dale Lillyhorn was one of the first to jump on board. He and his wife Jan thought their 35 acres of land would be ideally suited for the task. After establishing his vineyard and selling his grapes to JAV for a number of years, WindCrest became a reality in 2008 when the Lillyhorns opened their production/tasting room to the public. Open year round, visitors can sample a wide variety of wines inside or on the patio with a sweeping view of the countryside.

Just south of Lincoln near Roca you will find Capitol View Winery, a 14-acre property with a tasting room uniquely shaped like an old Nebraska barn. Capitol View is the newest winery to the Lincoln area, but it’s roots go a bit deeper. Established in 2017, the vineyard was planted in 2004 and the original owners opened the winery in 2009—formerly known as WunderRosa Winery.

New owners Les and Trish bring a unique look and feel to Capitol View Winery & Vineyards. One is a former professional boxer, and the other a former Colorado farm girl. Both became Nebraska lobbyists and so their professional backgrounds give personal meaning to the capitol building on their label. The owner’s background coupled with Nebraska’s beautiful views made Capitol View Winery & Vineyards an ideal name for the winery! All the grapes used for Capitol View wines come from grapes grown within minutes of the winery, including 2½ acres of estate grown fruit.

The latest addition to the Lincoln winery scene, actually has quite a bit of history in Nebraska winemaking and grape growing. The SchillingBridge Cork & Tap House started operations in Lincoln in 2014. The Cork & Tap House actually has its roots in Pawnee City where the SchillingBridge Winery began in 2004, creating award winning Nebraska wines. Not long after, Schillingbridge became the nation’s first farm winery/microbrewery combination.

Located in the Fallbrook neighborhood of Lincoln, the SchilllingBridge Cork & Tap House offers a variety of hand crafted wines and wine cocktails as well as their craft beers. The patio offers a mesmerizing fire table, stone fire pits and a brick pizza oven, with plenty of seating inside as well. For a truly memorable experience bridging the gap between the wine connoisseur and beer enthusiast, the SchillingBridge Cork & Tap House is the place to be.

You don’t have to travel far to find unique and appealing wines when visiting the capital city.