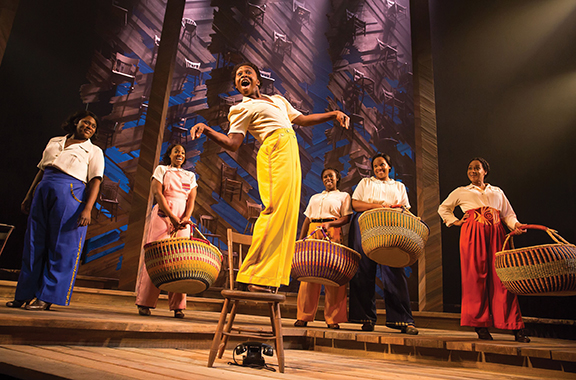 Recognized as “Nebraska’s Home for the Arts,” the Lied Center for Performing Arts is in the midst of what is possibly its biggest season ever, featuring the greatest performers in the world in every art form. From popular, to classical music, to dance, to musical theater, the Lied Center’s commitment to bringing the greatest artists and performers in the world has never been stronger.

This commitment includes bringing together collaborations only seen in the country’s major metropolitan centers like New York, Chicago and Los Angeles. For the first time ever, a new collaboration between one of the world’s greatest dance companies, American Ballet Theatre and the seven-time Grammy Award-winning musicians of the St. Louis Symphony will bring Igor Stravinsky’s Firebird to the Lied stage in February 2018. The historic performances and collaborations between American Ballet Theatre and the St. Louis Symphony are made possible with generous private support from the estate of Glenn Korff. In recognition of the gift, the event will be recognized as the GK Platinum Command Performance.

Support from the Glenn Korff estate also allows Broadway at the Lied to grow year after year. This year patrons will have the opportunity to see Broadway sensations such as Amazing Grace and the hit revival of The Color Purple, as well as classics like Jersey Boys, Kinky Boots and The Sound of Music. This season will also feature a performance by Tony

Award-winning Broadway superstar, Audra McDonald of Carousel and Raisin in the Sun fame.

These shows are in addition to a great line-up of stage performances, including a partnership to re-launch the Nebraska Repertory Theatre plus marking the 50th anniversary of Martin Luther King Jr.’s assassination with the L.A. Theatre Works production of The Mountaintop.

The Lied Center will continue to showcase some of the greatest popular music acts touring the United States including the high-octane fiddle-fest Barrage 8. There will also be plenty of laughs this season at the Lied as Second City, the top sketch and improv comedy troupe in the world, makes their return.

Supported in part by the Anabeth Hormel Cox Lied Center Performance Fund, the Lied Center continues its proud tradition of bringing the finest classical artists from around the world right here to Lincoln, Nebraska. Among other outstanding classical performances, audiences this season will see three gold medal-winners of the prestigious Van Cliburn International Piano Competition as well as the Lied Center debut of the Berlin Philharmonic Piano Quartet!

Beyond presenting dozens of world-class artists year after year, the Lied center is also committed to providing local students with opportunities to engage with professional touring artists during their time in Lincoln. Because the Lied Center is a proud affiliate organization of the University of Nebraska-Lincoln, students are often among the first to receive these unforgettable opportunities.

“Every young cellist dreams of the opportunity to take a lesson from Yo-Yo Ma, just as every dancer in training longs for the opportunity to work one-on-one with a principal dancer from American Ballet Theatre” said Lied Executive Director Bill Stephan, “moments like this happen at the Lied Center almost every week.”

The Lied Center approaches artists every season about opportunities to engage with students and community members of all ages during their time in Nebraska. This often takes the form of master classes, lectures, demonstrations and opportunities to ask questions about their careers and craft.

“When you purchase a ticket to a Lied Center performance, not only are you helping bring the greatest artists in the world to Lincoln, you are supporting transformational moments in the classroom that will change the lives of the individuals touched by these opportunities forever,” said Stephan.