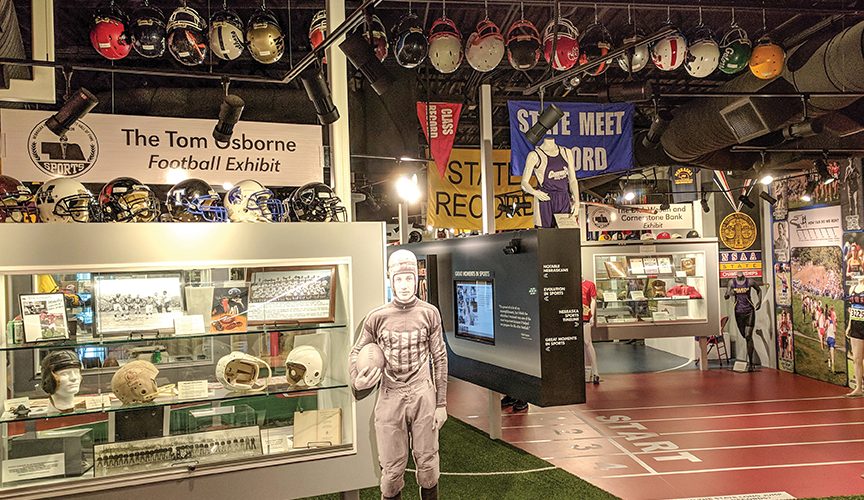 When we think of sports in Nebraska, the first thing that comes to mind is Husker football. But there is so much more, especially when it comes to high school athletics. It was with this in mind that the Nebraska High School Sports Hall of Fame Foundation was created. Located near the Haymarket Park at 500 Charleston St., Ste. 3, this non-profit has operated for more than 20 year, and opened a great museum full of memorabilia, to preserve the history of high school sports in Nebraska.

The purpose of the Nebraska High School Sports Hall of Fame Foundation, is not just to honor athletes with outstanding high school careers, but also those who played an important role in high school sports. This includes the administrators, coaches, officials and community members who have made significant contributions to high school athletics.

The Hall of Fame is worth a visit and will exceeds expectations. In the words of Chuck Johnston, Executive Director of the Nebraska High School Sports Hall of Fame, “This is so much more than a Hall of Fame, and especially more than a museum. It’s an exhibit hall that combines interactive activities with meaningful learning experiences… devoted entirely to preserving the rich history of high school athletics (not NU) but in our state!” At the Hall of Fame, you can see Nebraska high school stars from recent times and long ago. Learn how Nebraska values, work ethic and commitment lead to success in sports, how achievements in almost any walk of life can be traced back to the habits learned high school sports. You’ll begin your visit in the Wally McNaught Theater. Wally was involved in high school education and athletics for 45 years. A testament to Wally’s impact and character is the fact that the main funding for the theater was from an anonymous donor—a friend of Wally McNaught, who helped make the current exhibit hall possible.

The interactive displays show how you measure up against State record holders and perhaps even end up on the medal stand. At the same time, you can learn about some of the greatest athletes Nebraska has ever known, such as Tom Osborne, Allison Weston, Eric Crouch, Johnny Rodgers, Maurtice Ivy and more. Nostalgia is communicated through interactive exhibits. You’ll learn about records, great performances and the value of a strong work ethic, sportsmanship and commitment that made great athletes succeed. You can find out who the best athletes are from any era, from the small Nebraska towns to the large cities in the State.

Visit their website at nebhalloffame.org and find out when the hall is open, arrange group tours, sign up for their newsletter and learn how you can contribute. It’s interactive, educational and admission free. For more information call (402) 476 4767.