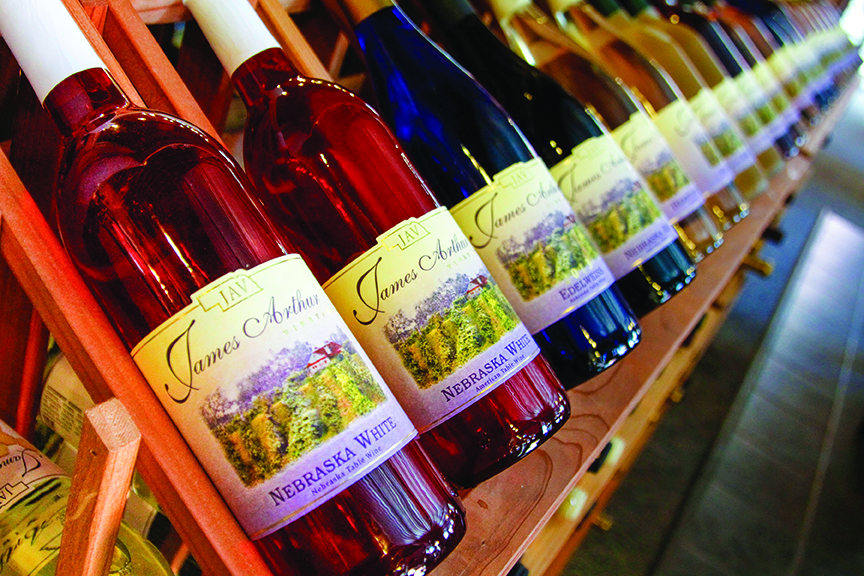 Over the last 20 years there has been an explosion of wineries across the United States. From 1995 to 2015 the number of wineries has increased from around 1,800 to nearly 8,500. Nebraska has mirrored the surge of wineries over the past two decades, now claiming 32 farm wineries across the state. Nowhere is that growth more evident than in the Lincoln area.

Now turn the clock back even further to Nebraska’s first farmers when Nebraska was home to hundreds of acres of grapevines, scattered across southeast Nebraska and along the Missouri River. The practice and tradition of growing grapes was carried to the New World by immigrants at the turn of the 20th century. Those grapes eventually were turned into delicious wines that emulated the wines that were created in the Old World.

Nearly a century later, the Nebraska Farm Winery Act was put into effect by the state legislature and began a renaissance of Nebraska wineries beginning in the mid 1990s. It opened the door for a number of entrepreneurial spirits to take their shot at the wine business in and around the capital city.

Leading the way was James Arthur Vineyards. The winery opened their doors in 1997 near Raymond, and became the state’s 2nd commercial winery. A pioneer in the Nebraska wine industry, James Arthur Vineyards is still the largest wine producer in the state. Less than 10 minutes from downtown Lincoln, the winery sits in the midst of the rolling hills of Northern Lancaster County. Surrounded by nearly 20 acres of vineyards, the winery also brings in grapes from nearly 20 other growers from across the state, making their final product truly unique to Nebraska.

The idea of growing grapes was first planted in the head of James Arthur Jeffers by his son-in-law (now JAV’s head winemaker) in 1992. Soon the first 100 vines, planted by hand and tender loving care were firmly secured in the earth. As the number of vines planted grew, so did the idea of turning the family’s hobby into an actual business. After careful consideration and researching a number of other wine industries across the country, James Arthur Vineyards became a reality.

Today, the vineyard has literally grown into the thousands of vines, highlighted by a number of varieties that thrive in the often harsh growing conditions of the Midwest. JAV’s vineyard has harvested some of the finest grapes they use to produce award-winning wines.

Along with producing award-winning wines, James Arthur Vineyards has also earned a reputation for outstanding customer service and the ability to create a great winery experience through their many events and beautiful grounds. That experience has been extended to Lincoln’s Haymarket with the purchase of the From Nebraska Gift Shop at 8th and Q streets. A tasting room was added to the shop, which features the best of Nebraska-made products. The winery has also added a new wrinkle, by taking apples from the family orchard and creating Nebraska’s first hard cider.

While being the oldest and most established winery in the area, they are certainly not the only award-winning winery.

Started in 2001, Deer Springs Winery is also a family owned enterprise located in the eastern part of Lincoln. Retired Navy Officer Jim Partington thought growing grapes would be a perfect alternative crop to try at the family’s original homestead. So he began to plant grapes.

Their tasting room opened in 2007 in the quaint farmhouse that sits on the land originally deeded to ancestor Patrick O’Halloran in 1874 by Ulysses S. Grant. The winery is surrounded by pine trees, giving it the peaceful, relaxed atmosphere of days gone by while still providing the contemporary comforts.

They feature live music on the weekends with a bucolic backdrop. Partington’s daughter Jennifer Reeder is the winemaker, and has created a plethora of wonderful tasting and award-winning wines that are distinctively Nebraskan.

WindCrest Winery, also located near Raymond, has made the transition from primarily growing grapes to producing and selling their own wines.

When James Arthur Vineyards begin looking for growers in the late 90s, Dale Lillyhorn was one of the first to jump on board. He and his wife Jan thought their 35 acres of land was ideally suited for the task. After establishing his vineyard and selling off his grapes for a number of years to JAV, WindCrest Winery became a reality in 2008, when the Lillyhorns opened their production/tasting room to the public. Open year round, visitors can sample a wide variety of wines inside or on the patio with a picturesque view of the countryside.

WunderRosa Winery is near Roca, just south of Lincoln off Wittstruck Road on Highway 77. The 14-acre property houses a tasting room uniquely shaped like an old Nebraska barn.

Claire Wunderlich grew up in the Roca area, and, after 33 years living in Texas, Wunderlich came back to the area with a dream of growing grapes and opening a winery with his wife Linda. Vines went into the ground and his dream was becoming a reality. Sadly, Claire passed away before he could see the final fruits of his labor, but Linda picked up the torch and now operates the vineyard and winery which opened in 2009.

Open Thursday through Sunday, WunderRosa provides entertainment throughout the year and offers the perfect venue for private parties.

Located at 575 Fallbrook Boulevard, the SchilllingBridge Cork & Tap House offers a variety of hand crafted wines and wine cocktails as well as their craft beers. With plenty of seating inside as well, the patio offers a mesmerizing fire table, stone fire pits and a brick pizza oven. For a truly memorable experience bridging the gap between the wine connoisseur and the beer enthusiast, the SchillingBridge Cork & Tap House is the place to be.

Decades after pioneering immigrants made their way into Nebraska, the state is booming with the startup of Farm Wineries in all corners. And, no place is it more evident that the age old art of growing grapes and turning it into fine wine is being displayed than in the rolling hills and the country sides surrounding Lincoln. For visitors today, it’s an experience that will most certainly be savored.