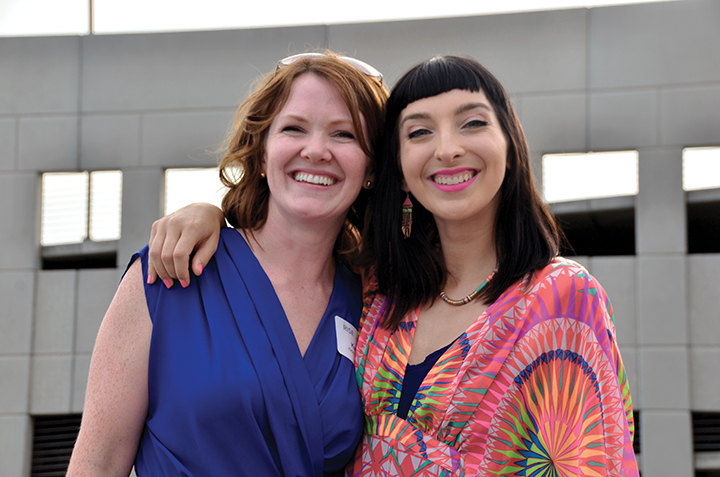 Katie Weichman Zulkoski told her audience she was happy that women in the workplace were getting some attention and advice. The lobbyist who now has her own firm, Zulkoski and Weber, was part of a 2013 panel at the University of Nebraska-Lincoln that focused on the challenges businesswomen face. About a month later, she attended a similar event out of town. All good.

But it got her thinking: Maybe it would be even better to focus not just on women’s problems in the workplace but on potential solutions to those problems. She started talking with other businesswomen in Lincoln about her ideas, and in fall 2014, Rise Lincoln was born.

“Our purpose was to work with women to help them rise up,” Weichman Zulkoski said. “We want to appeal to women from a variety of backgrounds and experiences, women who believe in other women.” The ideas and interactions Rise offers “give everyone energy,” she said.

Rise launched its speaker series in September 2014 with a program called “The Impact of Women Investing in Women.” That was followed by monthly sessions through spring on such topic as leadership, productivity, mentoring, learning how to negotiate and learning how to market yourself.  Between 150 and 200 people attended each of the free events, and nearly 300 were registered for the July presentation featuring Gala Darling, a New York City-based blogger.

Fall 2015 programs focused on how women can negotiate and claim their authority; why and how women support other women; and “what wise women are doing” to stay healthy physically and emotionally.

Weichman Zulkoski stressed that, except for the summer 2015 speaker, all the Rise presenters have been from Lincoln. “Lincoln has a strong community of women in business,” she said. “We can see examples of successful women – good role models – here in our own community.”

Holly Verkamp, human resources coordinator at Olsson Associates, an engineering and design firm in Lincoln, said that local network is an important part of Rise. “Rise has given me the opportunity to connect with so many fantastic women in our community,” she said, “women who are reaching their goals and inspiring others.”

Verkamp has been instrumental in another part of Rise’s mission, leading one of the smaller “community” groups that are spin-offs from the speaker series. Verkamp’s group of about a dozen women meets monthly over coffee to talk about human resources, marketing and entrepreneurship.

Another small group is essentially a book club, Weichman Zulkoski said, and yet another talks about current events or journal articles related to Rise’s focus.

Rise Lincoln is supported by its 15-member board of advisors and by donations from “very supportive Lincoln businesses,” Wiechman Zulkoski said. The group publicizes its events on an active Facebook page, by word of mouth and via a mushrooming email list.

Verkamp said she believes Rise’s rapid success shows that Lincoln women were “hungry for this connection and for these opportunities and are grateful for an energizing place to meet other women.”

The 2015-2016 programs are continuing to build that energy, Wichman Zulkoski said. Topics have included more advice on negotiating, maintaining one’s own wellness and how those who own their own businesses can follow their dreams.

She stressed that women and men of all ages and backgrounds—“anyone who believes in women”—are invited to attend Rise’s events and “feel the energy.” And she used a domino analogy to describe what she hopes Rise can do for people.

She remembers reading how, as a row of dominoes falls, the amount of energy each one creates is significantly greater than the one before it so that, by the time the eighth one falls, it could actually bowl a person over.

“We want Rise to be that first domino, to set things in motion for those attending,” she said.