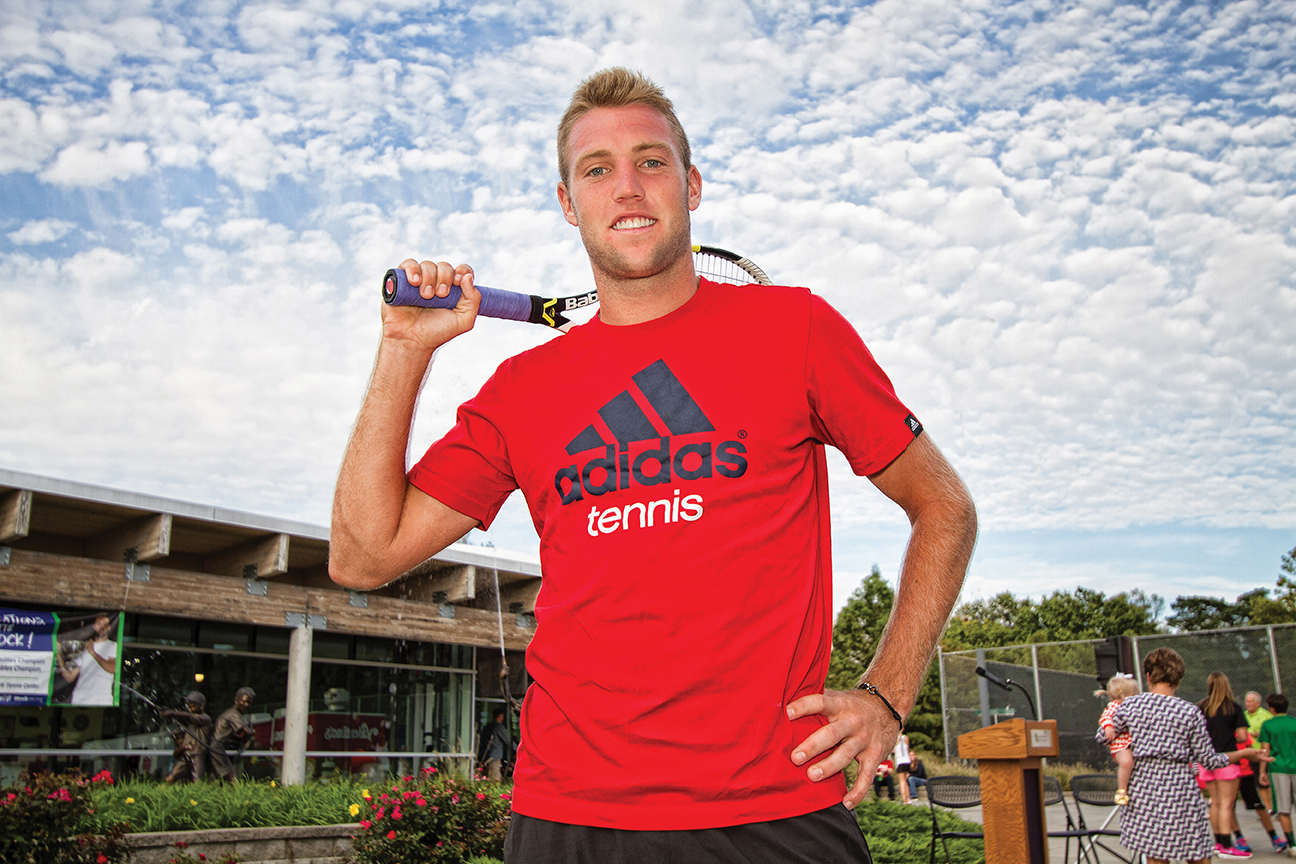 Lincolnites are happy to celebrate hometown heroes and they recently added young professional tennis player Jack Sock to the list.

The 22-year-old Lincoln native is one of the highest ranked American tennis players. And he’s accomplished what no other Nebraskan has been able to achieve on the tennis court—two Grand Slam titles. In 2014, Sock won the Wimbledon Men’s Doubles Championship with his partner Canadian Vasek Pospisil and in 2011, he partnered with fellow American Melanie Oudin to win the US Open Mixed Doubles Championship.

Sock is serving as an honorary chair for the $5.6 million “Taking the Game to the Community” campaign to replace the bubbles and improve the facilities at Woods Park Tennis Center, Lincoln’s only indoor public tennis center. The new facility will include a permanent structure, with six indoor courts and 12 outdoor courts. These are needed to serve an exploding population of tennis players and attract more tournaments to the Lincoln area.

“This is where I fell in love with the game of tennis. I have a lot of memories here, but it’s time for the tired bubbles to come down. The kids here deserve a permanent place where they can come, have fun and learn the sport the way I did,” Sock said.

“We’ve set our sights on expanding our programming not only at Woods, but throughout the community. We want to make tennis accessible to everyone, regardless of his or her background. With all the public courts around town, we saw an opportunity to take the game to the community so that anyone could take a racquet to a nearby court and play,” Heim said.

While Woods Tennis serves all ages and abilities, Heim’s vision starts with young people. “Once kids are hooked, they’re more apt to make tennis a lifetime activity,” said Heim, a tennis professional who built a successful tennis program in Milwaukee before coming to Lincoln.

“We are serving a segment of the population that people don’t normally think about providing tennis to and to be honest, a lot of their communities don’t think about playing tennis either. Once we expose them to it, a light bulb clicks on. We have examples of kids who have anger management issues and if it weren’t for tennis, they’d be in the Principal’s office, or suspended from school. Tennis is giving them something they can look forward to, something they relate to,” Heim said.

In addition to the community outreach, Woods Park Tennis Center is in demand to host more regional tournaments for players in Nebraska, Iowa, Kansas, Missouri and Oklahoma. It currently hosts 41 annual tournaments for nearly 2,100 players, including the National USTA Wheelchair Tournament, a warm-up for the US Open.

In addition to a permanent structure to replace the bubbles, the project will provide for:

• Expanded restroom and locker room space for men and women.

On his road to becoming a champion, Jack Sock passed right through the two bubbles at Woods Park Tennis Center.

“Jack Sock is an example of the dreams that can be realized when opportunities are made available. When we invest in making tennis more accessible to young children at the local and public level, we can cultivate the type of talent that it takes to make it to the big stage. Young players can learn to compete and succeed at the high school, college, national and international level. With our continuing investment in facilities and programming, we can help to increase the number of U.S. players and athletes who ‘make it’ at the higher levels,” according to Marg Lincoln Donlan, lead donor and campaign leader.

“These bubbles that helped propel Jack on his way have done their job — they’ve reached the end of their useful life. Now it’s our turn to do our job and set the stage for this next generation of kids you see here today,” she said.

The City owns the land and the Woods Park Tennis Center, which is operated by the Friends of Woods Tennis, making it a wonderful example of successful public/private partnership, according to Lynn Johnson, Director of Lincoln Parks and Recreation. Johnson believes an improved facility is part of a broader vision for sports tourism in Lincoln.

“Improving Woods Park Tennis Center goes beyond the local community or those who will be playing tennis there. It has a broader community impact. This is really part of the City’s economic development strategy. We, in Lincoln, have invested in building new venues and expanding facilities to bring sporting events to Lincoln, which attract people who spend their dollars in the community. So this is one more great activity that makes Lincoln a tremendous destination,” Johnson said.

“People before us had the vision and generosity to make our lives better. Now it’s our turn to ‘pay it forward’ and to do this for future generations,” said Donlan.

The Lincoln Parks Foundation serves as the fiscal sponsor for the $5.6 million campaign, which is expected to run at least 12 to 15 months.

Note: For more information about “Taking the Game to the Community” campaign to improve Woods Park Tennis, please visit www.TakingTheGame.com.