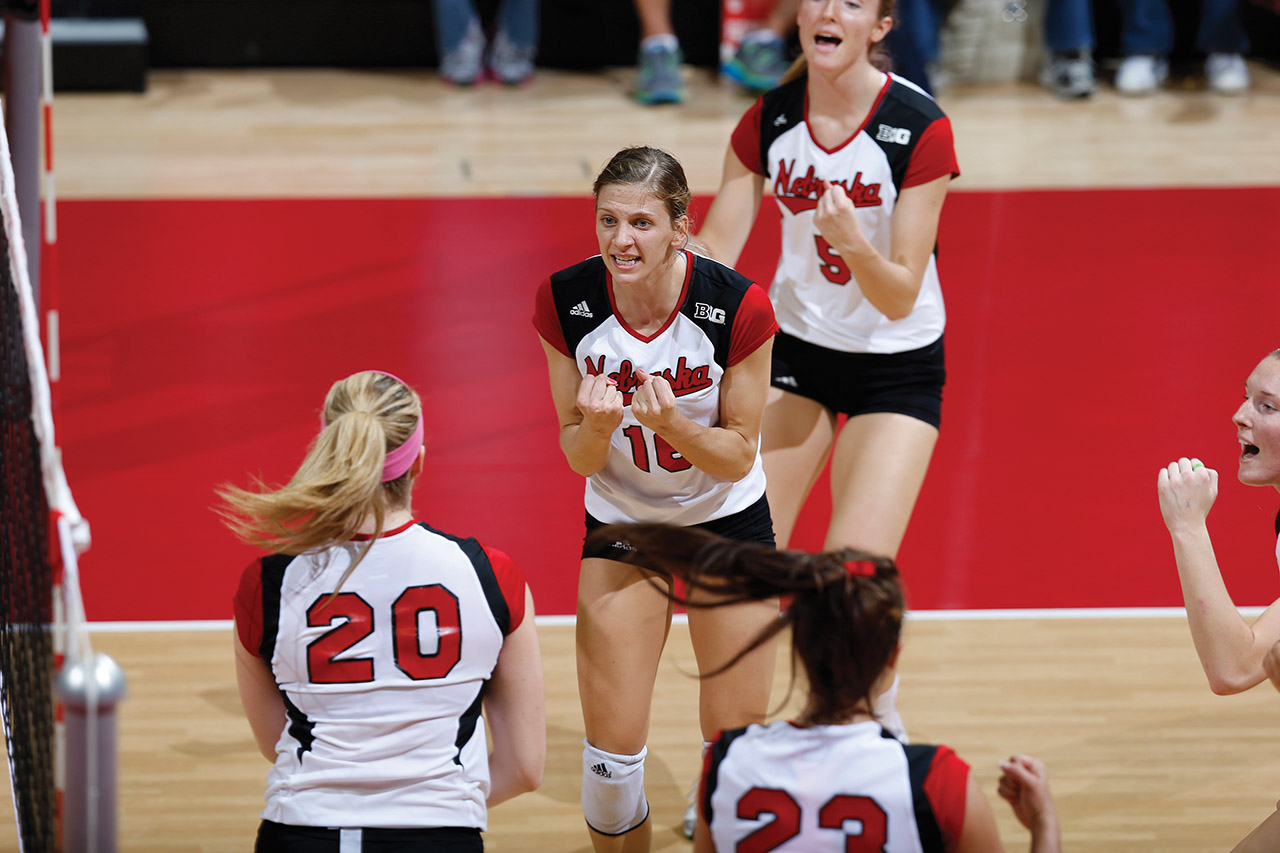 As the adage goes, whenever one door closes, another one opens. And adds more room for fans. At least that seems to be the theme for two Nebraska women’s sports teams. Both the Husker volleyball and women’s basketball teams will open the 2013-14 season in new venues this year. And, even though it was hard to say goodbye to the history and traditions of the NU Coliseum and Bob Devaney Center, fans are buzzing with excitement about the two new homes for Husker sports.

Although 2014 will mark the 30th anniversary of women’s intercollegiate athletics at UNL, organized women’s sports date back nearly 120 years to 1895, with the start of women’s basketball. Nebraska women’s athletics have come a long way since then, building proud traditions upon the strong foundations laid by the female student-athletes who came before them. They have won individual awards and hoisted national championship trophies; they’ve captured our hearts, had their jerseys retired, and won Olympic gold medals.

The Nebraska women’s athletics program is coming off another very impressive year, continuing a tradition of excellence. Some notable team accomplishments from the 2012-13 seasons were a second place finish in the Big Ten Indoor Track Championship, a first place finish in the Big Ten Championships in gymnastics and soccer, a first-ever Sweet 16 appearance for tennis, a seventh place finish nationally in rifle, the first trip to the Women’s College World Series in 11 years, a second Sweet 16 appearance in four years in basketball, a NCAA Regional Final appearance in volleyball, and a fourth National Championship in bowling.

It was a wild, exciting ride for the Nebraska Softball team in 2013. The Lady Huskers entered the season unranked but showed willpower and determination down the stretch. The team finished second in the Big Ten and earned a number 14 seed going into the NCAA tournament. The regional was hosted in Lincoln and the Huskers took advantage of having the home field with a shutout against Northern Iowa and two strong wins against number 13 Stanford, advancing them to the NCCA Super Regional for a chance to take on third-ranked Oregon in Eugene.

The Huskers won the first game in Oregon 5-2 before losing the second in extra innings, which would ultimately prove to be a recurring theme for the Huskers down the stretch. However, the Huskers bounced back to beat Oregon in the final game of the three-game series, winning 4-2 to advance to their first Women’s College World Series since 2002.

Unfortunately, the Nebraska’s College World Series experience was short-lived. The Lady Huskers lost their opener on a walk off home run in the eighth inning against Washington before losing a 15-inning heartbreaker to number 2 Florida.

The Lady Huskers ended the season with a record of 45-16, which tied them for the fifth-most single season wins in program history. Although the season ended in heartbreak, Nebraska will return many key pieces, giving fans a lot to look forward to in 2014.

The Nebraska Women’s Basketball team continued its run of success under Head Coach Connie Yori during the 2012-13 season. Despite losing five total upperclassmen over the previous two seasons, Yori returned four of five starters for the 2012-13 campaign. The relatively young team had a lot experience heading into the season and was anchored by junior All-American Jordan Hooper and senior point guard Lindsey Moore.

The Huskers started their final season in the Bob Devaney Center ranked 18th in the country. Led by their “big two” of Hooper and Moore, the Huskers went on to earn an impressive 25 wins, the second-highest total in school history. Their 12-4 record in Big Ten play also landed them in second place for the second-most conference wins Nebraska history.

The Huskers finished the season second in the Big Ten and advanced to the semifinals of the Big Ten Tournament before falling to Purdue. Then, as it does every March, the madness surrounding college basketball began. Nebraska was selected as a number 6 seed for the NCAA tournament and defeated number 11 seed Chattanooga. In the second round, Nebraska faced off against a familiar foe—former Big Twelve rival Texas A&M. The number 3 seeded Aggies were favorites to win but could not keep the pace in a game that was ultimately decided on the free throw line. Nebraska advanced to their second Sweet 16 in four seasons, beating the Aggies 74-63.

The Huskers went on to fall to 2nd seeded Duke in the Sweet 16, losing 45-53 in a defensive battle where both teams shot less than 33 percent from the field. Nebraska ended the season with an impressive record of 25-9, with all nine losses coming to postseason teams.

The Huskers weren’t short on postseason awards, either. Head Coach Connie Yori was named the Big Ten Coach of the Year and became the winningest coach in Nebraska Women’s Basketball history, earning 215 wins in 11 seasons. Hooper and Moore were named All-Americans by the AP, the first Husker teammates to do so in school history. Moore later went on to be drafted in the first-round of the WNBA draft by the Minnesota Lynx. The Huskers return nine letterwinners for the 2013-14 season, including senior All-American, Jordan Hooper.

As always, excitement and expectations were high for Nebraska Volleyball entering the 2012 season. The team entered the season ranked fourth in the country and returned four All-Americans in junior Morgan Broekhuis and seniors Lauren Cook, Gina Mancuso, and Hannah Werth.

The Huskers started hot, recording victories in their first eight games, including a win over number 1 ranked and defending National Champions, UCLA. They continued their hot streak in the NU Coliseum, dropping only one home game to Ohio State. However, the Huskers had their share of struggles on the road, winning just over half of their games away from Lincoln during the regular season.

The team appeared ready for the postseason, sweeping Maryland Eastern Shore three sets to none. In front of a packed house for the final time in the NU Coliseum, the Huskers swept Northern Iowa. The place seemed to literally be rocking with excitement. The final point, which struck the floor with a thud that no one heard, seemed to be poetic justice for a building steeped in tradition. Senior Lauren Cook set up fellow senior Gina Mancuso for the kill – from one Nebraska girl to another, just the way it should be – two Huskers just living their dreams.

The Huskers advanced to the NCAA Regional final before falling to Oregon 3 sets to 1. Although this was a bittersweet end to the season, fans were left with plenty to look forward to next year.

This year will mark the 30th year of women’s athletics at Nebraska. It’s hard to fathom how much history and tradition we have packed into three decades. Who knows what the next thirty will bring? Whatever the outcome, one thing looks certain; momentum seems to be on our side.