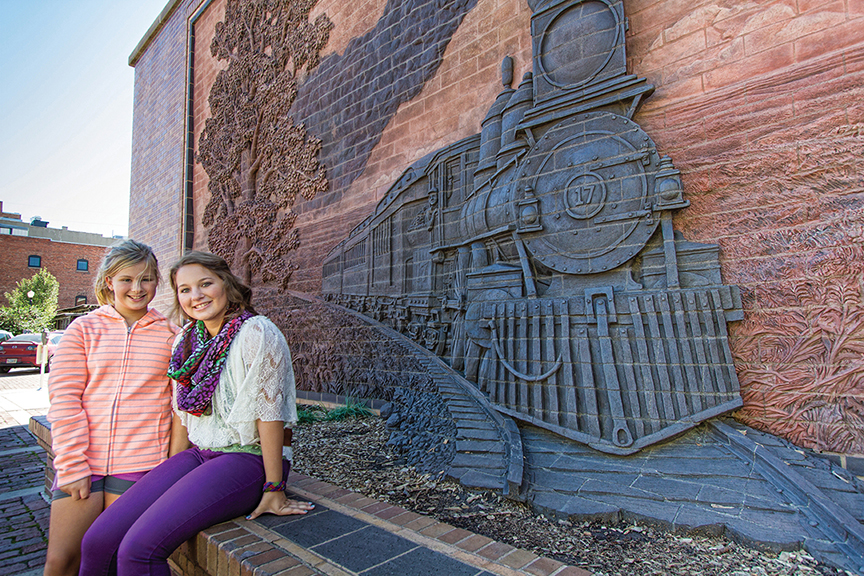 Nobody is trading actual hay in the historic Haymarket district these days, but the neighborhood is still hopping, offering Lincolnites and visitors alike plenty of opportunities for good times and fun.

If you close your eyes halfway and squint a little, you can almost imagine what the area might have looked like when the town of Lancaster changed its name to Lincoln and became Nebraska’s capital in 1867. That magical designation as the seat of state government helped attract railroads to the bottomlands along Salt Creek, and what had been a sleepy town began to blossom.

The railroads brought essential nourishment to that growth, and by the late 19th century, wholesale jobbers settled their businesses in the blocks just east of the tracks. The jobbers bought goods that arrived by train, stored them in the warehouses they built near the tracks and sold them from there via traveling salesmen.

About a dozen of those warehouses and a couple of what were hotels for the salesmen are still standing west of 9th Street in the area near downtown that is now part of the National Historic Register. But it took initiative and effort from the Lincoln community to revive what had become a run-down neighborhood by the early 1980s.

It was 1985 when the National Main Street Center named the Haymarket a demonstration project, said Jeff Cunningham, business administrator for the Lincoln Haymarket Development Corporation. That national connection gave impetus to a project that is still growing.

The first order of business was to rehab some of the warehouses and several old hotels in the district, Cunningham said. One of the first to be renovated was a drug store built in 1906, which became home to Gillen and Boney Candy Co. Now known as the Candy Factory, the building houses offices and restaurants like The Oven, famous locally for its Indian cuisine.

And cuisine in its “do-it-yourself” mode—tomatoes, lettuce, squash, beets and other produce—became a part of the Haymarket when the annual Farmers Market opened in 1987.

The redevelopment continued steadily for nearly 25 years. Cunningham said some of the earliest occupants of the renovated buildings were restaurants like Old Chicago and Lazlo’s; the Burlington Antique Mall in part of the original railroad station; shops like Ten Thousand Villages, From Nebraska, and The Mill coffee shop.

But the Haymarket made a giant leap forward after Lincoln voters approved building a 16,500-seat arena in 2010. The proposal included provision to move the railroad tracks, which were so important to the Haymarket’s origins, farther to the west to make room for both the arena and a passel of other buildings: restaurants, shops, hotels, condos and offices.

In the years since, a flock of construction cranes sprouted in the Haymarket as one project after another was planned and completed. But even the new buildings have preserved the historic feel of the district. Today, where once the trains pulled in to unload their goods and teams of horses and mules hauled those goods to the nearby jobbers’ warehouses, people of all ages can find something fun and interesting to do at the Haymarket.

The biggest problem — trying to decide just which event or shop or gallery or restaurant to sample —is easy to solve: The Haymarket is open 24-7, and repeat visits are welcome.

Open each Saturday morning from early May through early October, the market’s vendors display local produce, flowers, meats and cheeses. Artists and artisans offer their work for sale, and market visitors can find plenty of prepared foods ranging from egg rolls to kettle corn. Entertainers provide live music at Iron Horse Park, just north of the original train station, and kids can get their faces painted and watch clowns create balloon animals just for them.

The Railyard and The Cube

Part of the new development, the Railyard serves as a community gathering place surrounded by restaurants and bars. The Cube, a 750-square foot screen, offers concerts and movies and a place to join your friends to watch major televised sporting events. In the winter, the Railyard becomes an ice rink big enough to accommodate up to 150 skaters.

If you like Italian food, the Haymarket has it. Prefer Japanese or Indian cuisine? You can find that, too —along with steaks. And there’s pizza and burgers and chefs offering vegetarian menus. Venues range from relatively upscale to super casual, and many eating places include outdoor seating where diners can look out on the brick streets and the rail spur that keep the Haymarket’s history alive. Some of that outdoor seating is on slabs that were loading docks when the original jobbers built their warehouses.

Coffee lovers will never have to go without their fix. The Mill is the oldest coffee house in the Haymarket, but several others have since taken up residence. Another early occupant, Ivana Cone, continues to offer ice cream in dishes and cones, plain or decorated. Or you can get frozen yogurt at several shops if that’s what takes your fancy. There are plenty of places to pick up your favorite candies, too.

Western? Irish? Upscale? Down-home? Sports-themed? The Haymarket offers dozens of places to imbibe. Most establishments that serve liquor also serve food. And at least one shop specializes in offering artisan wines by the glass or in bottles “to go.”

Art galleries were among the redeveloping Haymarket’s first occupants and supporters, and they continue as a mainstay of the area. Boutiques, gift shops and several bookstores offer wares original to Nebraska or collected from around the world.

The Haymarket is home to people of all ages, Cunningham says. Housing options include apartments to rent and condos to buy. Several of the buildings are designed to be specifically accessible for people with disabilities, and some include low-income options. The traffic generated by athletic and entertainment events at the new arena has prompted construction of three new hotels in the historic district – and a bunch of parking garages.