The Magic of Haymarket Park 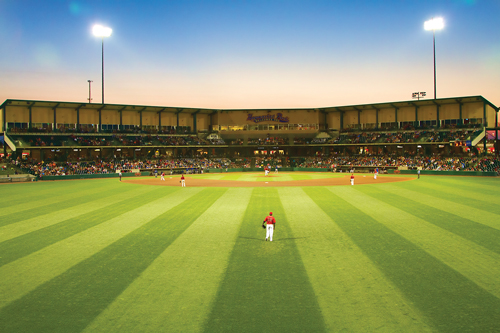 Haymarket Park has won “Best Playing Surface” by several professional organizations for 12 years in a row—every year since it has opened. It is well worth a visit just to look at the well groomed field.

The Huskers head baseball coach is a fan favorite who will be in his third season at the helm. Coach Darin Erstad is a former UNL baseball and football player who went on to have an outstanding professional career in the major leagues. He played 14 years in the majors and was a two-time All-Star. Erstad retired in 2009 after 14 seasons with the Los Angeles Angels, the Chicago White Sox and the Houston Astros. Then he and his wife, Jessica (also a Nebraska graduate) returned to Lincoln.

They have stayed close to the athletic program, donating $1 million in 2004 to help renovate the football stadium where Erstad was a punter for Coach Tom Osborne’s national title team in the 1994 season. Coach Erstad spent 2011 season as a volunteer coach for the Husker Baseball program, then took over the program in 2012.

The 2014 season will be the Huskers’ fourth year competing in the Big Ten Conference. From February through May, Haymarket Park is a sea of red and white, where dedicated Husker fans participate in trivia contests between innings, and sometimes catch a t-shirt thrown into the stands. The games provide fun for every age.

The Saltdogs are Lincoln’s professional baseball team and occupy Hawk’s Field from late spring through the end of summer. The Saltdogs belong to the American Association of Professional Baseball, which is an independent minor league and not directly affiliated with any major league team.

However, it is often a stepping stone for young talent. Each year fans watch as Saltdog players move up the baseball ladder by getting signed to a major league organization.

This past year, Saltdogs fans were able to watch a few home-grown baseball players come back from college and play with their hometown team. The fun never stops at Saltdogs games, from cheering on the team to participating in between-inning promotions, the Saltdogs’ staff creates a fun afternoon or evening of entertainment for the entire family. Weiner Wednesdays is a fan favorite promotion. Hot dogs are a special price and fans can bring their dogs to the park for between inning races. Homer, the Saltdogs’ mascot, is always on hand to entertain fans of all ages.

Fans can also enjoy Home Run Terrace, which features a spectacular view from right field plus all-inclusive amenities. This “all you can eat” seating area provides your game ticket, food, and soda all in one package. Fans also have the option to purchase a drink ticket. This section knows how to enjoy a game. Perched under the scoreboard and video screen, the fans are treated to the kind of service usually found only at major league ball parks.

Baseball can be magical on fields all over the city. For adults who want to play ball there are several opportunities. For recreation, the YMCA offers softball leagues. For those interested in a more intense baseball experience, there is the Lincoln Adult Baseball League where college students and other competitive adults keep their skills sharp.

For children, the YMCA and the Junior Saltdogs League offer recreational teams as well as spirit leagues, which provide a little more competition. In addition, the number of select clubs continues to rise giving young athletes increased opportunities for competition. There are levels of the game for every participant

High school baseball starts in the spring and morphs into the American Legion baseball program from Memorial Day through July. Legion baseball in Lincoln has a strong tradition, offering both junior and senior leagues. Games can are played at the newly renovated Sherman Field, Den Hartog and Densmore Fields.

From youth baseball games to the strong tradition of High School and Legion baseball all the way to Haymarket Park, Lincoln baseball fans have the opportunity to see it all.

Catch the magic! Visit Sherman Field for Legion Ball, stop by the local parks like University Place and catch a game with 10-year olds playing, or shake out a blanket on the berms of Haymarket Park and enjoy the Saltdogs. You just never know who will be the next Lincoln player to hit the majors.