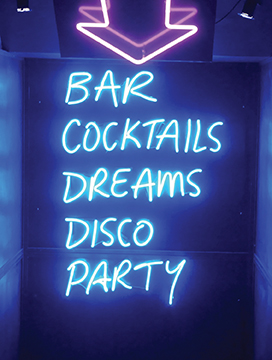 [Re]Discovering evenings out in Lincoln

For many, nightlife means live music or other entertainment, and good company. Lincoln has an abundance of nightlife destinations for those who enjoy a good night out. ‘Early-nighters’ have options, too. When you’re ready to go out again and get reacquainted with the people and places you love and like, or discover something (or someone) new, there’s
a place for you in Lincoln.

Lincoln has multiple spaces for smaller acts, to big names who attract thousands to the Pinnacle Bank Arena, the Lied Center, or Pinewood Bowl. The pandemic months have squeezed most venues’ bottom lines leaving those who are coming out on the other side wondering about or reimagining their futures. But things are s-l-o-w-l-y looking up. Bands, other entertainers and theater companies are on the road again as health and safety allows, in some cases resuming postponed tours.

There are a lot of music venues in close proximity to one another, so artists can hop between venues or play to different crowds that patronize them. Omaha is 45 minutes away, and a lot of talented people go back and forth between the two cities. Lincoln is also lucky to have numerous nonprofits working to support the arts and foster a younger demographic.

The Bourbon Theatre and The Zoo Bar have the biggest reputations to live up to on the local music club/bar scene.

In the heart of downtown, the vintage marquee in front of the Bourbon Theatre at 1415 O Street announces the next bands to play the re-imagined vintage movie theater. Since opening in 2009, it’s risen as a club like none other in Lincoln, hosting shows by Stone Temple Pilots, Taj Mahal, the Wailers, Canadian alt rockers Blue Stones, comedian Dave Attell, 311, and Swedish metal band Avatar. The size and acoustics of the venue are great for an intimate acoustic show or a raging rock fest.

It gives up-and-comers like country artist Randall King a place to play, too. The venue holds as many as 900 people, often general admission/standing room only, and open two or more nights a week depending upon the time of year. Along with The Zoo Bar, Duffy’s Tavern at 1412 O Street, Bodega’s Alley at 1418 O Street, and 1867 at 101 N. 14th Street, Bourbon annually hosts the multi-site Lincoln Calling (fall) and Lincoln Exposed (winter) music festivals that draw large crowds. (See the article about festivals elsewhere in this publication.) Find out who’s playing now and next at bourbontheatre.com.

Patterned after classic Chicago blues clubs, The Zoo Bar has been in the same spot at 136 N. 14th Street, seemingly unchanged since 1973. Many of the biggest blues artists and legends in the business have played here like James Harmon, Charlie Musselwhite, Stevie Ray Vaughan, Buddy Guy and Robert Cray. The club hosts the best local musicians and future legends as well. There’s history here, but it’s probably good the walls don’t talk.

With changing demographics, The Zoo Bar has added jazz, stand-up comedy and roots music to its lineup. But the live blues is the best, and the contemporary blues artists who play The Zoo are exceptional. Be sure to check out the club’s mid-summer anniversary party—ZooFest—that takes over the street outside the front door. Chicago Blues Hall of Fame artist Michael Charles and his band nearly blew the roof off the club a few nights ago, in a show that started at 6 p.m. Expect the same from other blues musicians in the coming months. To find out who is playing and when, see the club’s calendar at the newly revamped zoobar.com.

Most Thursday, Friday and Saturday nights, you’ll find a band playing or maybe a comedian getting laughs at The Royal Grove, a venue that’s evolved with the decades at 340 W. Cornhusker Highway. On stage recently at The Royal Grove were rockers Puddle of Mud, COLD or Blue Oyster Cult; country artists Jo Dee Messina, Josh Ward or Blackhawk; hip hop artist Scru Face Jean, and comedian Hunter James. The Grove is only open for ticketed events. See theroyalgrove.com for info.

For any entrepreneurs out there, what Lincoln is lacking is a great jazz club…just sayin.’

Here are more ideas to help create your next evening out:

Lincoln’s burgeoning brewery community has not only cross-pollinated into food, but often supports local music, too. Try Kinkaider Brewing Company in the Haymarket or Schillingbridge Cork & Tap House in the northwest part of the city. Both have great outdoor spaces. In fact, many pubs and nightspots all over the city now offer comfortable outside social spaces, like the roof top at Barry’s Bar & Grill (Haymarket).

Rumology at 7301 S. 27th Street features craft cocktails, live music or comedy most nights of the week in their unique and spacious lounge.

The restored Rococo Theatre at 140 N. 13th Street usually hosts concerts throughout the year. Decibel restrictions in the building make it a perfect setting for comics, world music, jazz or acoustic performers (rococotheatre.com).

If nightlife to you is lingering over a lovely dinner and wine, reserve a table at The Normandy, Casa Bovina, Vincenzo’s Ristorante, DISH Restaurant, JTK Cuisine & Cocktails, Billy’s, The Oven, The Green Gateau or Venue Restaurant to name a few (see other ideas on page 82).

For something different, go through the secret door at Boombox Social into the Sideshow Cocktail Lounge. Or, through an unassuming glass door in the alley behind 1332 P Street, you’ll find a vintage pay phone that is the gateway to the Lady Luck Lounge. You’ll need to know the pass code, which you can find on Lucky Lady’s Facebook page.

So, when you’re ready, please put down the remote, go out your door and support the nightlife in Lincoln. Have fun remembering what fun feels like!