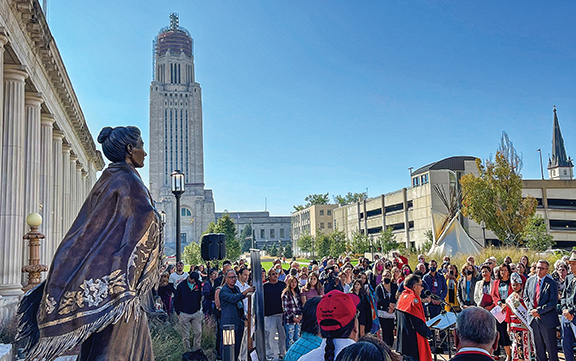 Walk Centennial Mall in Lincoln, Nebraska and you’ll find a treasure trove of information about Nebraska’s history. Indigenous plant life line the walkways along with details honoring the beadwork and designs of the First People in Nebraska. At the end of the walk stands a towering sculpture of Chief Standing Bear, Ponca Civil Rights Leader.

In between the Capitol and Chief Standing Bear’s likeness there are plaques noting the contributions of Indigenous Nebraskans, a map of the Ponca Trail of Tears, a light circle recognizing the 27 tribes associated with the state…and a second sculpture of another prominent Indigenous leader now graces the walkway. A sculpture of Dr. Susan La Flesche Picotte joined the mall in October, officially unveiled on Indigenous People’s Day, October 11th.

Both of these leaders, represented in bronze, have unique stories, pasts and legacies. Their presence on the Lincoln Centennial Mall will undoubtedly bring their stories to a wider public, and deserve to be honored in such a way.

“These two pieces have changed the landscape of America, and definitely Nebraska,” said Judi gaiashkibos, Director of the Commission on Indian Affairs and a key player in getting both statues to their positions on Centennial Mall. “This is part of that whole movement of moments of reckoning. This is a teachable moment.”

Chief Standing Bear was born around 1829 on the Ponca homeland where the Niobrara and Missouri rivers meet.

“This land is everything for us, it’s where our ancestors have been buried for centuries,” said Ponca Chairman Larry Wright Jr. “You know, the bones of our relatives and our ancestors go back into the earth. All the grass, the animals, the vegetation, all those things that grow after our people are buried, our DNA is in all of those things. You can’t take us from the land because that’s part of us.”

So when the federal government decided to forcibly remove the tribe in 1877, breaking their treaties and promises, Chief Standing Bear protested their eviction. Federal troops eventually forced the Ponca to march to a reservation in Oklahoma.

During this time, one third of the Ponca people died. Including Chief Standing Bear’s sixteen year old son, Bear Shield. On his deathbed, Bear Shield asked his father to grant him his last dying wish of being buried in their traditional homeland amongst their ancestors. Chief Standing Bear promised this wish would be granted.

Standing Bear wrapped the body of his son in a buffalo robe and began the march back North with a few members of the tribe, headed for their homeland. On the journey, Standing Bear and a handful of others who followed were arrested for leaving.

Chief Standing Bear secured two prominent attorneys to represent him in court and his lawyers filed a writ of habeas corpus, questioning the legality of their detainment. Ultimately, the government asked the bleak question of whether or not Chief Standing Bear had the right to file a writ of habeas corpus on their question of whether or not “an Indian was a ‘person’ under the meaning of the law.”

The 1879 case went to trial and is now known for Chief Standing Bear’s triumphant argument that yes, Indigenous peoples are “human” after he made his case in front of the packed courtroom.

“It’s Indigenous people are the embodiment of (his) words,” said Steve Laravie, Jr., direct descendent of Chief Standing Bear. “Because it stood for Indian people. Why can’t you see what (he’s) trying to do is something in honor for (his) son. Wouldn’t you do the same?”

Chief Standing Bear went on to continue the
fight for justice for his Ponca people, and all
Indigenous people.

Dr. Susan La Flesche Picotte is widely known as the first Native American physician in the history of the United States.

She was born in 1865, daughter of Chief Iron Eye (Joseph La Flesche.) Susan attended the Presbyterian Mission School in Nebraska where she and other Indigenous children were forced to speak English, punished for speaking their native languages and forbidden to wear clothing from their tribe. She was noted as exceptionally bright from a young age and ultimately attended an all-girls boarding school in Elizabeth, New Jersey.

After studying in Elizabeth, Susan continued her studies at the Hampton Institute, where she excelled and discovered her interest of becoming a physician. She sought to help her Omaha people by combining the lessons she’d soon learn in medical school with that of the traditional healing practices of her Omaha people.

Susan was accepted and attended medical school in Pennsylvania, bringing her once again back to the East Coast. She wrote letters back home, often giving medical advice from afar while attending school and continued to excel above her classmates, ultimately graduating as the school’s valedictorian.

Susan returned to her reservation and worked as a physician there. She would travel far distances and work long hours in order to care for anyone who needed it.

But Susan’s contributions expanded past that of her medical and healing work, she also was active in public health campaigns as an activist for her people. She spoke out against the whiskey peddlers on the reservation and was an outspoken critic of federal land allotment policies after seeing more and more of the Omaha’s land stolen for white settlers.

In 1913, she fulfilled one of her greatest dreams and raised enough money to build a hospital in Walthill, Nebraska on the Omaha Reservation. The hospital was the first to be built on a reservation with only private funds.

Susan eventually succumbed to cancer in September 1915, leaving behind a rich and ongoing legacy.

The Importance of Sculpture Arts

Statuary has the power of remembrance, storytelling and legacy building. But getting a statue onto Centennial Mall is no simple feat.

In the case of Chief Standing Bear and Dr. Susan La Flesche Picotte, both sculptures started as a sequence of conversations that ultimately led to donors expressing interest in funding the projects.

Director of the Nebraska Commission on Indian Affairs (NCIA), Judi gaiashkibos is at the center of this cascading effect. She’d often ignite conversations that would lead to dreaming up the creation of each statue. For Chief Standing Bear, Donald M. Campbell provided the funds and for Dr. Susan La Flesche Picotte, Larry Small donated the amount necessary to make the project happen.

Lincoln Parks Foundation and NCIA then brought the idea to the Capital Environs Committee where both statues were approved.

Benjamin Victor, Boise-based artist, was hired to create both sculptures. Victor stands as the youngest sculptor to have three statues in the iconic Statuary Hall in Washington, D.C., with one more in the works.

Victor’s work caught the attention of George Neubert, Director of the Flatwater Folkart Museum, who was on the committee to help select the artist and advised in the process of placing the Chief Standing Bear sculpture on Centennial Mall, brought on for his extensive experience in museums and public art work. Neubert noted of Ben’s work that, “blood was running through the veins” of his sculptures.

“It’s not only his skill and ability as an artist, but his extraordinary sensitivity,” Neubert said.

After gathering research, speaking to experts, and understanding the heart of the stories of both individuals, Victor makes his first clay models. When the clay structure is complete, Victor and his team make molds of the entire piece, which are then brought to a foundry in Lander, Wyoming where the wax is poured and dipped in a ceramic shell. The structure is passed through a high temperature oven where the wax melts out and molten bronze is poured into that negative space.

“When it’s poured and cooled, the ceramic shells are cracked off of the bronze,” Victor described. “Those raw bronze castings are cleaned up, welded together, and the welds are chased off. Once that was all finished, we did the patina.”

In the end, the result is a statue that is carefully transported to Lincoln, Nebraska.

“Because these works are placed in a public space and in a prominent location, all of a sudden they now develop both awareness and knowledge of whoever you’re honoring,” said Neubert. “We’re working within a tradition to honor and bring respect and knowledge and awareness to their contributions to our system, our government and our society.”

The Dr. Susan La Flesche Picotte statue joined the Mall on Indigenous People’s Day this year, unveiled to the public to be viewed, discussed and memorialized for years to come by all Nebraskans.