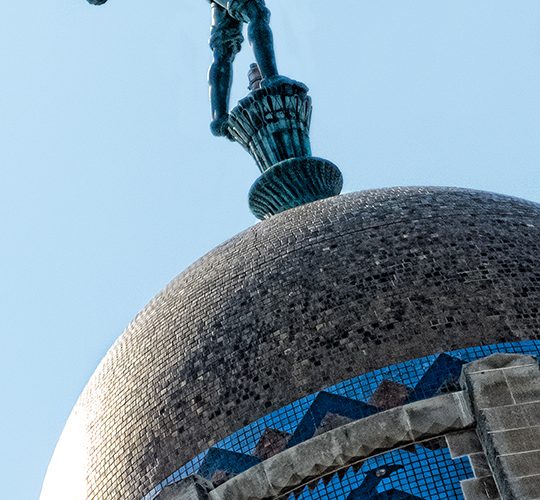 Four people retired in 2021 from Lincoln organizations, leaving a swell of progress in their wake—and a deep hole to fill in their absence. Together they compiled nearly a century of service in their roles as leaders and changemakers for the good of the community. They are: Scott Young of the Lincoln Food Bank, Wendy Birdsall of the Lincoln Chamber of Commerce, Bob Downey of the Capital Humane Society and Barbara Bartle of the Lincoln Community Foundation. Here’s a look at each of them.

Scott Young earned celebrity status as a local radio personality, but that wasn’t enough for the Lincoln native. Some 20 years ago, he switched gears and took over the reins at the Lincoln Food Bank, where he found himself in unfamiliar waters. “I was inexperienced running a business,” he admitted. “I was really new at 100 percent of it.” He confronted a steep learning curve, from supervising staff to raising money to accountability to a board, but learning new skills was part of the reason he changed careers. “I wanted the job to learn some new things, and I learned more than I could have dreamed of. It was a total shift.”

Luckily Scott was a quick learner, and the community reaped the benefit. The Food Bank saw significant growth—from supplying 1.75 million meals a year when he took over the day before Sept.11, 2001, to 13 million meals his last fiscal year. (Scott’s last day was April 30.) He witnessed food security explode. “The need just went off the chart during the 2000s,” he said, “and remains hot today.”

To that end, under Scott’s leadership, the Food Bank initiated a $10 million campaign and is building a new home on Northwest 12th Street—a 50,000 square-foot structure with 60,000 square feet inside, including two floors of office space—that expects to be complete by spring 2022.

With the new and improved facility underway, Scott moves on. “I hope to do something professionally yet that will be a benefit to the community and will be an educational challenge for me,” he said. “I am passionate about learning, and so I hope that I have a third act, but it will not be as complicated as my first two, and it won’t be full time!”

As for Lincoln, Scott still loves this community as a great place to raise a family, to be an entrepreneur and to take risks. But he thinks that while 85 percent of the people here live good lives, that figure should be 100 percent. “We’ve got a lot of lives in this community that need the rest of us.”

Wendy Birdsall began her professional life as a hospital dietitian; becoming the Lincoln Chamber of Commerce president wasn’t in her game plan, but that’s where her skills led her in 2006. She has 30 years invested in the organizations that make up the Chamber, including a little-known entity that works with the medical community to promote medical services to a regional audience. The Lincoln Specialty Care project marks the start in 1991 of this fifth-generation Lincolnite’s professional cheerleading for this community.

Through the years Wendy has had leadership roles with the Lincoln Convention and Visitors Bureau and the Lincoln Partnership for Economic Development, all to promote and enhance the positives about the Capital City.

The first woman to lead the Chamber, Wendy met head-on the challenges that impede a community’s progress. Whenever the chance arose to bring something about, “you talked about it, and you basically put together a committee to kill it,” she said. Wendy preferred to think outside the box and act. And then came the Pinnacle Bank Arena.

“That was a real game-changer for the community, in the way they perceive themselves,” she said, noting that voters approved a bond issue in 2010 despite the recession and the many nay-sayers. It wasn’t easy, she remembered, getting people to think big, to spend money, to create an entertainment district of restaurants and bars to complement the arena—to convince folks “to move ahead and say yes we can instead of accepting the status quo,” she said.

Looking back, Wendy names the arena as her biggest achievement. “I frequently use the sports analogy—building the arena, getting the vote passed and getting it built was a home run, but the development of that entire Haymarket District was a grand slam,” she said.

Looking ahead, Birdsall sees travel in her future—to Alaska, to Maine and to Idaho and Montana. And she envisions a future when the city becomes a mecca for youth sports tournaments.

“It’s amazing to be so much a part of the growth and development that has happened,” she said with obvious pride. “Once we get people here to experience it, they love it, and they don’t want to leave.” Count Wendy among them.

When Bob Downey reported to work at the Capital Humane Society on Jan. 30, 1984, he walked right into the director’s office, and there he stayed until spring 2021. The challenges were immediate and urgent. The shelter dealt with 10,000 animals a year, primarily cats and dogs, had a staff of 11, including him, and only one facility to handle it all. The organization was approaching insolvency, and there were no veterinary services onboard.

Fast-forward three decades, and the positive outcomes are evident: a balance sheet of total assets that jumped from $225,000 to $11 million; a staff that has tripled, a dedicated veterinary suite; and a second building, the Pieloch Pet Adoption Center, thanks to a major donor, donated land and a $4.4 million capital campaign.

No more lying in bed awake at night wondering how to pay people, he said with relief.

The original building, now the intake and assessment facility, sits at 2320 Park Boulevard, where it’s been since the 1920s. The new adoption center is at the southeast corner of 70th Street and Nebraska 2.

With more staff, two facilities and financial resources that meet the need, the Capital Humane Society is well positioned to serve the community. “Just looking at that and the financial situation of the organization,” he said, “we were able to do so much more for this community and so much more for those pets whose custody we were charged with.” And that includes the occasional monkey or snake.

But Bob’s reach to help animals went even further. He got involved in legislation to felonize animal fighting and persisted for three years until the bill became law. In all, he worked on 40 to 50 pieces of legislation to protect animals in this state.

The Lincoln native looks back on the nearly 250,000 animals the shelter serviced during his tenure and knows that the people affected is many times more. When families adopt a pet or are reunited with a lost one, “you’re not only helping animals, you’re helping people,” he said.

Bob knows firsthand—he has two boxers, SamE, who is 9, and GozMoeE, who is 3. They are among the eight boxers he has adopted from CHS over the years.

Barb Bartle relied on a three-legged stool to guide the Lincoln Community Foundation; there were only two legs, metaphorically speaking, when she became the head of the organization 11 years ago. Now the third—leadership—is the heart of the operation that still relies on the other two to do its job—grantmaking and development (assets grew from $60 million to $180 million during her tenure.) But leadership is what has put community front and center.

The Cozad native who has called Lincoln home since 1984 came to the LCF with 18 years’ experience at the Lincoln Public Schools Foundation; she hit the ground running. Two new efforts in a community engagement process, Vital Signs and Prosper Lincoln, reflected the foundation’s role in leading the community to better itself. LCF became the “backbone,” Barb said, “leading the charge to address the findings of our data.” Over the years, the focus expanded from early childhood, workforce development and affordable housing to include strong neighborhoods and civic investment. She points to the plan to redevelop the south of downtown area as engagement that leads to action.

In her second year, the foundation held its inaugural Give to Lincoln Day, raising $1.2 million for 150 nonprofits; the past year, the 10th, it collected nearly $8 million for 456 nonprofits from 30,000 donations.

Also under her leadership, the Lincoln Littles campaign began in 2019. The annual drive raises money to provide much-needed early childhood tuition assistance, one of LCF’s focus areas. “It’s really building a grassroots movement to support our little ones in this community,” she said.

When Covid-19 first hit, the foundation spearheaded a community drive, rallying support for nonprofits during the early bleak days. On its heels came the Give to Lincoln Day, cobbled together with a remote-working staff. The response was overwhelming, much like a village barn-raising.

“This community loves each other and cares for each other. and we know how to come together and build a barn,” Barb said.

Gracious to the end, she credits the board and the staff for major roles in all the foundation’s success.

As for post-retirement, Barb takes on a new leadership challenge: Rotary district governor.