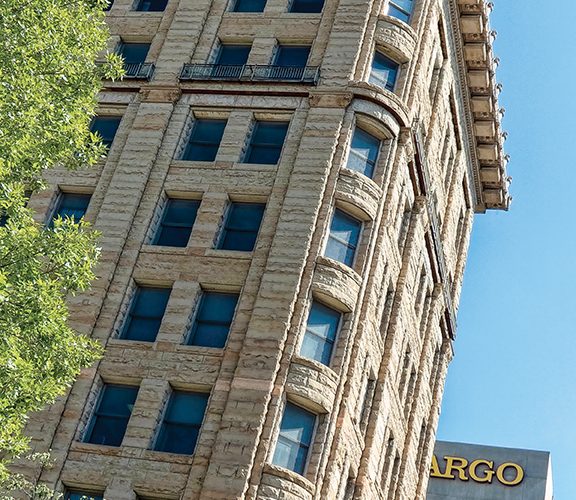 After living 20 years in an east-Lincoln neighborhood, Brad Wilson and Michele Tilley traded their four-bedroom, four-bath home for a two-bedroom, two-bathroom condominium in downtown Lincoln.

“We realized how much space we were not using,” Wilson said. “We had bedrooms closed off and closets that weren’t used. We realized we could live a lot smaller.”

So in October 2018, they went from the 2,600-square-foot house—with another 600 square feet of finished basement—to a 1,400-square-foot condo. Owning a cabin in Wyoming made the transition easier, they said.

“It’s a small cabin,” said Tilley, “less than 700 square feet, and that got us to thinking about space differently.”

Once they made the decision to move, they began to downsize. Wilson estimated they sold 75 percent of their belongings. Tilley’s collection of clocks went from more than 60 to two. The number of lamps they owned, from 60 to 10.

“It was a great process, but also painful,” said Tilley. “We would look at something we just adored, and say, ‘OK, let it go.’”

They invested in a rotating wall bed, and Wilson built a fold-up desk on the back of it, allowing Tilley to use the spare bedroom as her office, too.

“Our entire apartment is active space,”
she said.

Wilson, 57, is vice president of Vertiv, a data center product provider near 17th Street and Cornhusker Highway. Tilley, 52, is communications manager at the Lied Center for the Performing Arts at 12th and Q streets. Their condo is close to both of their jobs. It’s also close to the Haymarket, the Railyard, Pinnacle Bank Arena, Memorial Stadium, Rococo Theatre and many restaurants and nightclubs.

Said Tilley: “We go to a lot more movies now than we did before. We recently joined the Ross (Mary Riepma Ross Arts Center).

Downtown residents are a mix of students, young professionals and older folks who are either empty-nesters or looking to downsize. They are part of Lincoln’s population that prefers to live in what’s become a growing and thriving area.

According to the 2018 Downtown Lincoln Master Plan, approximately 1,500 downtown dwelling units were added from 2014 to 2016, many of them targeted at University of Nebraska-Lincoln students.

Housing ranges from established places including the Hardy and Grainger buildings on North Eighth Street and Centerstone at 12th and O streets to newer ones such as Raymond Brothers at 801 O St., Canopy and Arena lofts in the Haymarket’s Railyard and 8N Lofts at 811 N St. and Latitude Apartments at 235 S. 11th St. The Downtown Lincoln Association offers a guide at downtownlincoln.org/live/downtown-living-guide.

The LincolnLancaster County Comprehensive Plan envisions an additional 3,000 dwelling units in this core area by 2040. Downtown has about 9.3 million square feet of occupied commercial space, making it the city’s main hub of employment and entertainment.

Over the next decade, city planners
expect 900 to 1,900 non-student-oriented apartments or condominiums to be developed in the downtown area, including
in the Telegraph District at the eastern edge of downtown near 21st Street and Capitol Parkway.

Tafe Sup Bergo’s family is among those developing downtown buildings into living spaces, converting three buildings at 14th and P streets – once home to the Post and Nickel clothing store — from solely commercial to a mix of commercial and residential. Eight condos should be ready to be occupied by fall 2020 at the latest, said Sup Bergo, a Woods Bros. Realtor.

“It’s close to campus, which makes it a strong draw. Downtown now is vibrant with business people and college students. It just has a great vibe, and people want to live near that.”

The vibe is what drew Kurt Elder. That and baseball, said the 39-year-old who has lived in his one-bedroom, 700-square-foot apartment in the Hardy Building for 10 years. He rented the place because it was affordable and close to Haymarket Park.

“I love baseball, and that was a big draw,” he said. “It allowed for my habit to thrive.”

Elder is a GIS analyst for the city’s Department of Urban Development and president of the Haymarket Neighborhood Association. Working within Urban Development has allowed him to be part of the downtown planning and development process, including the addition of the Canopy Street Market, a grocery store that opened in August 2018 to serve downtown residents.

“That was No. 1 on the (development) bucket list,” Elder said. “Jill Moline (Canopy Street Market owner) has been a godsend. Plus, she hires kids and residents who live downtown to work for her.”

Elder admits it’s not completely rosy living downtown, with late-night noise being an issue — “I can sleep through anything now” — but the pluses outweigh the minuses. He said he loves the diversity of people and businesses, calling it a microcosm of what Lincoln is.

“It’s just a great place to live, work and play,” he said. “It’s become a destination. It’s where people want to be.”