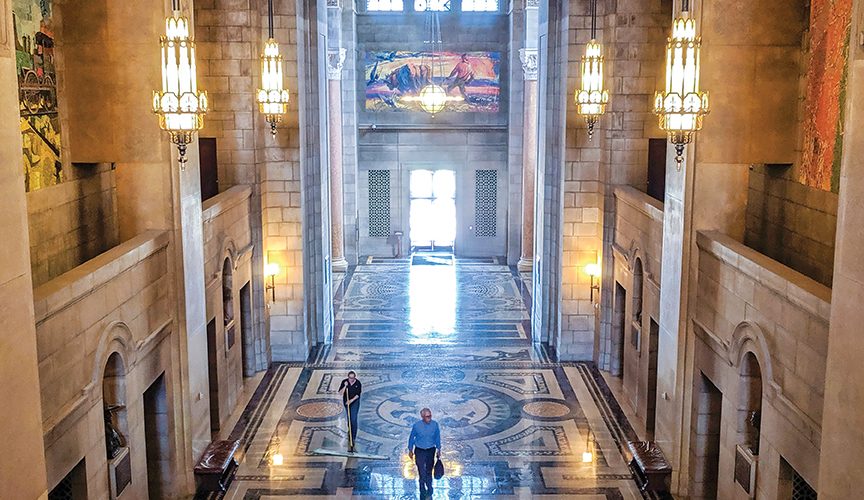 Nebraska’s iconic Capitol is visible from 20 miles away, and was the first in the nation to incorporate a functional tower in its design. At the top of this Tower on the Plains, above a gold-tiled dome banded with azure, the massive Sower extends his hand as if sowing seed from a canvas bag.

Joining a city-wide effort to incorporate more sustainable, energy-efficient heating and cooling, a geothermal field is under construction a few blocks east of the Capitol at 1445 K St. Slated for completion in late 2019, the closed-loop system keeps liquid flowing between the wellfield and the Capitol to both absorb and shed heat, providing both heating and cooling. The 10-year, $106 million improvement plan includes window repairs, fire alarm upgrades and an emergency generator. Footings have been added to allow for future building above the wellfield.

Tours of the Capitol remain available during the construction process, and a kiosk in the center of the main floor is staffed for those with questions. Knowledgeable docents provide background and answer questions in detail during short, informative tours offered seven days a week. Visitors can take the building’s tiny elevators as high as the 14th floor for a panoramic view of Lincoln.

Within the building, a complex medley of design offers a stunning stroll through artful symbolism and history. The Capitol is also a lively workplace, housing the executive and judicial offices of the state, as well as the chamber for Nebraska’s unique unicameral Legislature. Designed by New York architect Bertram Grosvenor Goodhue in 1920, building began in 1922 and ended a decade later. The Capitol was built with massive blocks of Indiana limestone, and the names of Nebraska’s 93 counties are  inscribed around the base.

A 10-foot statue of Ponca Chief Standing Bear on Centennial Mall just north of the Capitol between Q and P Streets recognizes his contribution to Native demands for equality before the law. The statue bears Standing Bear’s famous statement made during the landmark trial that ended with recognition that Natives are people by law and therefore entitled to its full protection: “That hand is not the color of yours,” he said before the court. “But if you pierce it, I shall feel pain. If you pierce your hand, you also feel pain. The blood that will flow from mine will be the same color as yours. I am a man. The same God made us both.”

In 2017, a counterpart to Lincoln’s bronze of Standing Bear was dedicated on Ponca land near Niobrara, Nebraska.

“We are standing here today because of a promise made by a father to a son,” Ponca tribal Chairman Larry Wright said at the time. “This statue honors him, but it also honors all those who came back.” The Ponca tribe is in the process of acquiring 1,800 acres of original tribal land, including Standing Bear’s burial site.

European Americans appear in gilded relief depicting the Spirit of the Pioneers. Inscribed below these figures, the core idea behind the one-house Legislature: “The salvation of the state is the watchfulness of the citizen” underscores the civic responsibility of Nebraskans to work toward a more noble life. Citizen engagement—the “second house” of the unicameral, the voice of the people—is directly reflected in these words.

The interior corridor of the building is comprised of three monumental rooms—Vestibule, Great Hall and Rotunda—throughout which decorative elements appear in sequence. The domed Vestibule introduces a gifts of nature theme through mosaics of flora and fauna with the sun as a central motif. The largest in the Capitol, four 25-foot columns of red Verona marble support the vaulting, topped by bull motifs.

A top destination for anyone interested in art, architecture and local history the Nebraska State Capitol is a fine place to spend an hour or two.

Tours are on the hour (except at noon)

Open every day except Thanksgiving and the day after, Christmas Day and New
Year’s Day.