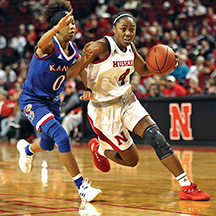 When most people think about Nebraska, they usually conjure up two things: corn and the Cornhuskers. And that makes sense. Corn is the most widely grown crop in the state, and with no professional sports teams in Nebraska, the Cornhuskers are easily the most recognized sports brand. And when someone hears the words Cornhuskers or Huskers, they likely think about the football team and the 90,000-plus screaming fans that pack Memorial Stadium each Saturday in the fall. But this article isn’t about the football team; it’s about the dynasties being built at Nebraska by a handful of women’s teams.

Collectively, the University of Nebraska has 28 national titles in school history in five sports. And three of those championship-winning teams are in women’s sports. Husker women’s teams lead the charge with 15 national championships, and the school has 13 women’s varsity sports: basketball, beach volleyball, bowling, cross country, golf, gymnastics, rifle, soccer, softball, swimming and diving, tennis, track and field and volleyball.

While the five championships the men’s football team has won are nice, in the 20 years that bowling has been a varsity sport, Nebraska has become one of the top programs in the nation. Under former Coach Bill Straub, the Nebraska women’s bowling team has won 10 national championships including five NCAA titles and the inaugural championship in 2014. Nebraska is the only team that has qualified for the championship every season in the 14 seasons the NCAA has sanctioned the sport.

The No. 14 women’s gymnastics team finished its 2018-19 season placing fourth in the Ann Arbor Super Regional and third in both the Big Ten regular season standings and the Big Ten Championships. The season had plenty of winning moments, including the hiring of new head coach, Heather Brink. And throughout the season, the team set a record for its highest team score at the 29th Annual Masters Classic. Plus, three team scores throughout the season broke into the top 10 in Nebraska history. In addition to team success, according to NU Communications, “nine Huskers were named Academic All-Big Ten, 14 gymnasts were named to the Nebraska Scholar-Athlete honor Roll for the fall semester and finally, all 16 Huskers were recognized for their work within the Lincoln community and were named to the Tom Osborne Citizenship Team.”

The softball team has been behind the plate at Nebraska for 44 years. During this time, the team has appeared in 24 all-time NCAA tournaments, ranking it 10th nationally and second in the Big Ten. Nebraska has posted a top-10 national finish eight times in the past 22 seasons. And, it has produced 30 CoSIDA (College Sports Information Directors of America) all-time Academic All-Americans, more than any other softball program in the country and third-highest total in NCAA history among all female sports. The team is led by Coach Rhonda Revelle, a National Fastpitch Coaches Association Hall of Fame coach, and all-time wins leader across all sports and coaches (male or female) at Nebraska with more than 950 career wins.

The women’s basketball team is led by Coach Amy Williams, who was a four-year letter winner at Nebraska and is in her fourth season as coach. After leading the team in a major turnaround season, Williams was named the 2018 Big Ten Coach of the Year and was one of 10 semifinalists for the Naismith National Coach-of-the-Year honors. While 2018-19 didn’t include a trip to the NCAA tournament, the 2019-20 season features a nine-game Big Ten home schedule and will include the return of five starters and each of the team’s top seven scorers from a year ago.

The Huskers rifle team spent the 2019 summer competing across the globe and honing its skills on the international stage. From the USA Shooting National Championship and the Junior World Cup in Germany to the Pan-American Games in Peru, current student athletes and coaches of the Husker rifle team are placing the Huskers on the world map in shooting sports. Assistant Coach Mindy Miles and Head Coach Rachel Martin were both recently named to the USA National Teams; only 10 other women in the U.S. were named to this team.

Next time you’re looking to buy tickets, explore the options available for these winning teams or any of the Husker women’s teams. You won’t be disappointed.