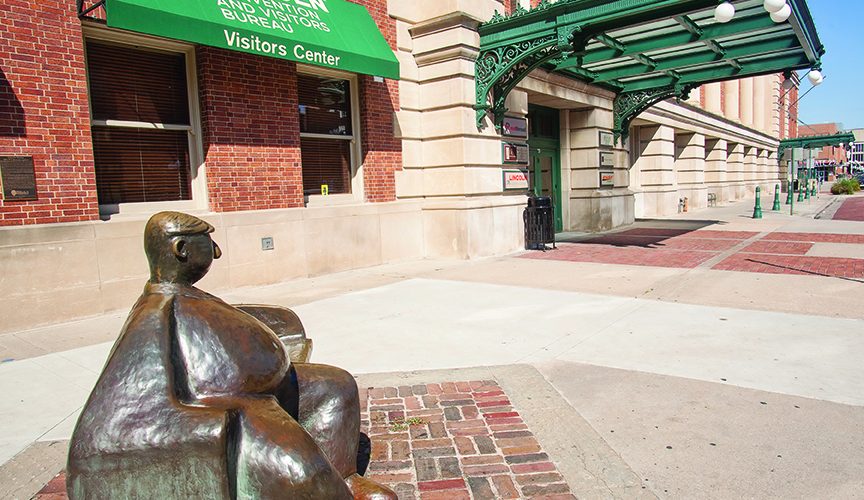 Over the past decade, Lincoln’s Mayor, Chris Beutler, has placed priority on public art in our city, raising the stature of Lincoln and making it an lovely and artistic place for all the residents. It seems that every year a new piece of art is unveiled in Lincoln—a city that satisfies art lovers. There are more than 100 pieces of public art on display throughout the city. Thirty-five of these pieces have been added since Mayor Beutler came into office, bringing us sculptures, memorials, murals, monuments and exciting wall art. So, take some time to enjoy the art in the city.

As far back as 1903, the Nebraska Legislature created the Lincoln Centennial Memorial Association, authorizing it to spend ten thousand dollars in state funds on a memorial, provided an equal amount could be raised from private contributions. The result, the Lincoln Monument on the West Plaza of the Nebraska State Capitol, is the only structure on the grounds that predates Bertram Goodhue’s Tower on the Plains,begun in 1922. The somber bronze sculpture is by leading American sculptor Daniel Chester French, who also sculpted The Lincoln Memorialin Washington D.C. Nebraska’s great orator William Jennings Bryan spoke to a crowd of thousands in 1912 at the dedication of Standing Lincoln. This love for public art has continued to grow in the city and every year Lincolnites see new art grace their city.

One of newest and most creative pieces is the Chief Standing Bear sculpture that is part of a $9.6 million redesign of Lincoln’s Centennial Mall. Originally constructed in 1967 to commemorate the state’s centennial year, the pedestrian mall extends seven blocks south to north from the State Capitol to the campus of the University of Nebraska-Lincoln.

Another a recent artistic addition to Lincoln is a 45-foot-tall metal sculpture, Harvest. Its ever-changing colors, shine in the plaza in front of the Pinnacle Bank Arena. The abstract sculpture with lights illuminating upward—both interior and exterior—was designed by Portland, Oregon artist, Ed Carpenter. It’s a masterpiece of light-sensitive stainless steel and laminated glass. Carpenter said the sculpture is a “beautiful, distinctive form that complements the arena and the plaza, visible on two streets, R and Canopy.” Harvestevokes a sheaf of wheat, or a fountain. All the materials are sensitive to light and its illumination gives it a 24-hour presence. The dichroic glass used by Carpenter “reacts in a marvelously mercurial way to light,” as the colors change from every angle.

Lincoln is the home to one of the largest freestanding ceramic sculptures ever made. New York City sculptor James Tyler created his 15-foot tall ceramic creation for the Union Plaza Park. The Colossus, a giant brick head, consists of more than 300 individually shaped bricks stacked in concentric circles, layer upon layer, using over ten tons of red clay. The masterpiece stands in the middle block of Union Plaza, between P and Q streets.

Ascent, another recent sculpture on 13th and P streets, was installed by German steel and glass workers in the heart of downtown Lincoln. The large glass spire lights up at night like a magical tower of color. Created by renowned Japanese sculptor and Omaha resident Jun Kaneko, it consists of sand gardens, and concrete concentric circles that surround the five-story, multi-colored, lighted glass tower. The $1.15 million, 57-foot-tall glass tower, fabricated in Germany, is the centerpiece of Tower Square at 13th and P streets. A 1970s theater was demolished to make way for this shiny new plaza with lots of seating and space to simply linger and enjoy. Come to Tower Square and enjoy the space, bring lunch or coffee, come with friends and immerse yourself in this piece of art.

The Sheldon Sculpture Garden, located on the campus of the University of Nebraska-Lincoln, features 30 distinct sculptures from the early 20th century to the present. Dedicated in 1970, the garden originally covered 2.5 acres. Outstanding pieces of modern and contemporary sculptures have been installed in the garden as well as across the campus. These world-class sculptures, created by artists from around the world, continually intrigue University of Nebraska Lincoln students, staff and visitors. The most popular sculptures in the Garden include Torn Notebookby Claes Oldenberg and Coosje van Bruggen, Old Gloryby Mark di Suvero, and Greenpointby Richard Serra. For a map of the sculptures and for more information, visit sheldonartmuseum.org. Other sculptures on campus include David Smith’s Superstructure Four, an amazing stainless steel work; Tony Smith’s Willy; Prismatic Flake the Alumni Building on R Street; and Variable Wedge, an abstract close to Westbrook Music Building. These are only a few of the sculptures that grace UNL’s campus.

Redwallis a collection of 383 individual ceramic tiles that nearly covers an entire wall in the Lied Center for Performing Arts’ newly added Lied Commons. Eddie Dominguez, an associate professor of art at the University of Nebraska-Lincoln, envisioned the public art project and saw it to fruition. To show that the work represents a community, not a singular artist, individuals who created the tiles remain anonymous. Children and students created many of the tiles, ranging from images of flowers to footballs.

In 2003, the Lincoln Arts Council spearheaded what is considered Lincoln’s first major public art project. Designed to draw attention to Lincoln’s 85-mile trail system, the Tour de Lincoln featured 71 bicycle sculptures located throughout the city’s parks, businesses, private residences, and, of course, bike This was followed by 69 pieces of star-themed artwork graced Lincoln during 2006. This public art project, which benefitted the Lincoln YWCA and each work’s artist, was made of a wide variety of styles—photographs to sculptures, mosaics to paintings. Each piece of artwork was created with a star in honor of Lincoln, the Star City.

The most recent public art project, implemented in 2017, was the Nebraska by Heart Project. All 89 Hearts were displayed on Haymarket Park’s covered concurs and auctioned. In addition, Nebraska by Heart merchandise will be available for sale including the book about the Project. Also under the covered area will be concessions open throughout the day.

Appropriately situated near Nebraska Wesleyan University’s fine arts buildings, Calling Away symbolizes the uniting of the fine arts: art, music, and theatre. Calling created by 1950 by sculptor Dan Peragine and is made of blue welded steel.

Bronze sculpture Watchful Citizenportrays a man sitting on one side of a bench with plenty of room for a passer-by to stop and rest next to him. The sculpture in Lincoln’s Haymarket near Lincoln Station (N. 7th and Q streets) provides a popular spot for photo opportunities. Artists Elizabeth Stanley Wallace and William Schlaebitz created the sculpture in 1993.

Located in one of Lincoln’s most popular attractions, the Sunken Gardens, Reveilleis a cast metal sculpture created by Dr. Wayne Southwick. Reveilledepicts an angle blowing a trumpet and was inspired by the artist’s wife getting their children out of bed.

The Bicentennial Cascade Fountainis a concrete water feature placed near one of Lincoln’s busiest intersections, S. 27th Street and Capitol Parkway. The fountain, created by artist Larry B. Group, is a tribute to teachers and how they influence the youth of Nebraska.

Honoring the pioneer women of Nebraska, sculptor Ellis L. Burman’s Pioneer Womanrests in the Memory Garden at 33rd and Melrose.

These are only a few of the public sculptures in Lincoln, as well as some great murals on walls. The museums are full of amazing art too. Take time to read the Art Gallery story on page 34 for more information about all the art that enhances the city. Lincoln is truly a city full of art.

For location of these amazing pieces of art check publicart.artscene.org/.