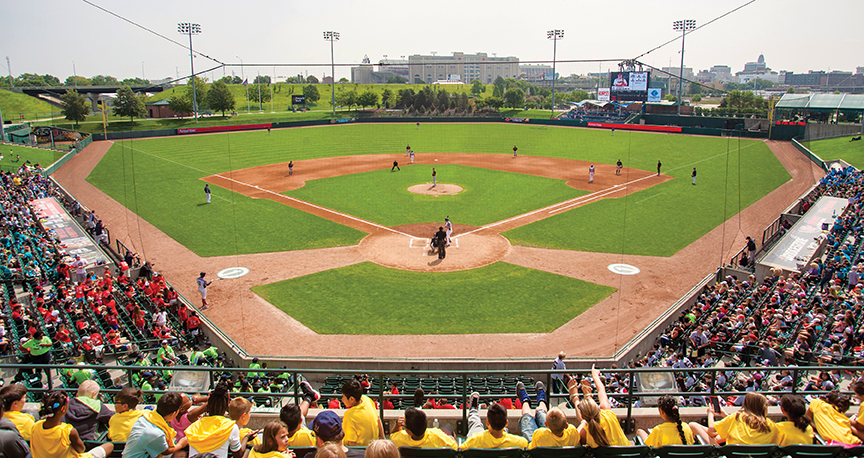 A warm, late August evening at Haymarket Park should feature the sound of bats cracking, the sight of an immaculate, green field and the smell of hotdogs, all while the Lincoln Saltdogs entertain their fans with America’s favorite past time.

Instead, the stadium near Lincoln’s Haymarket District this summer resembled something deserted long ago as part of a ghost town. Cobwebs on the concourse. Weeds growing through the infield dirt. Dry, brown patches of grass in the outfield.

The venue hardly resembled a stadium that’s earned the American Association Playing Surface of the Year Award for 19 straight years—as long as Haymarket Park has existed.

Then again, what else would anyone expect during an unprecedented global pandemic that began in March—first halting the University of Nebraska’s baseball season, then in June cancelling the season for the Saltdogs?

For certain, a city that’s proudly supported both baseball teams throughout Haymarket’s Park history felt a major blow with little baseball to see in 2020. That’s especially true for the Saltdogs, ready to celebrate the organization’s 20th anniversary.

“We are all plodding along in unchartered territory, as we work hard to do all we can to get back to a ‘new normal’ for all events,” Lincoln Saltdogs President and General Manager Charles Meyer said in a letter to fans. “We are learning and educating ourselves each day as to what steps we will need to take to ensure that you will again enjoy Haymarket Park.

“We’re not immune to the impact this pandemic has and will continue to cause, but we also know many of you have trusted and respected the Saltdogs – as a pillar for the community—to rely on having some fun each and every summer.”

Not all has been doom and gloom for Haymarket Park this year, though. The weeds and cobwebs disappeared in September as the Nebraska baseball team spruced up the place to play an intrasquad series. Fans weren’t permitted to attend, because of the pandemic, but that didn’t halt their spirit. Some 38,000 people, at some point, viewed a live stream of the scrimmage through the school’s web site.

“The Husker fans, they always show up for us,” Nebraska senior pitcher Max Schrieber said. “All around the country, they’re hungry for college baseball.”

Nebraska had begun its first season with new head coach Will Bolt, a former Husker player, in February. The Huskers held their own while facing some stiff road competition and learning more about themselves under a new regime. Upon returning home, Nebraska won five of its first six games at Haymarket Park, and as of March 11 had won three straight games.

Then, the abrupt cancellation of the remainder of the season, with concerning uncertainty to follow. Bolt had always preached to his players to play as if they were playing their last game, because they never knew when it could be their last. Of course, he was generally referring to a sudden injury, or some such occurrence—not a global pandemic. Still, the rule applied.

“We were living that firsthand back in March, when we got the season ripped away from us,” Bolt said. “There were some uneasy times there for a couple months. I think once our guys were able to start playing some summer baseball, getting back out there and getting back into some of their routines, you could just kind of tell the spirits picked up a little bit. That’s really carried on into the fall.”

“It’s just an awesome feeling to be back out there with the guys,” he said. “We went through a lot with our season cut short.”

Even though the Huskers’ season ended very prematurely, Bolt felt he saw enough in a short amount of time to get a feel for his first Nebraska team.

“We kind of had an idea of how we wanted the roster to look in terms of athleticism, versatility and on the mound—the type of guys that were feel like are going to help us win,” Bolt said. “We played a tough schedule.”

Meanwhile, Bolt and his staff continue to bolster the roster through strong recruiting. Nebraska signed two junior college transfers in April, and in July signed four more players – three of them Nebraska natives, a positive sign the Huskers are working hard to keep the state’s top talent within state borders.

“I think when you’re talking about having a recruiting strategy, you’ve got to start somewhere, and no better place to start than in your own state,” Bolt said. “I think it is just one of those things where having played here, having been an assistant coach here and recruited in the state, I obviously know the love for the Huskers that most everybody has in the state.

“They grow up coming to games here. A lot of their parents went to school here. They grow up with Huskers in their blood. That part of it is big, but again, we’re going to go where the talent is, too. You have to have a strategy. You’ve got to start somewhere, and Nebraska has really good high school baseball.”