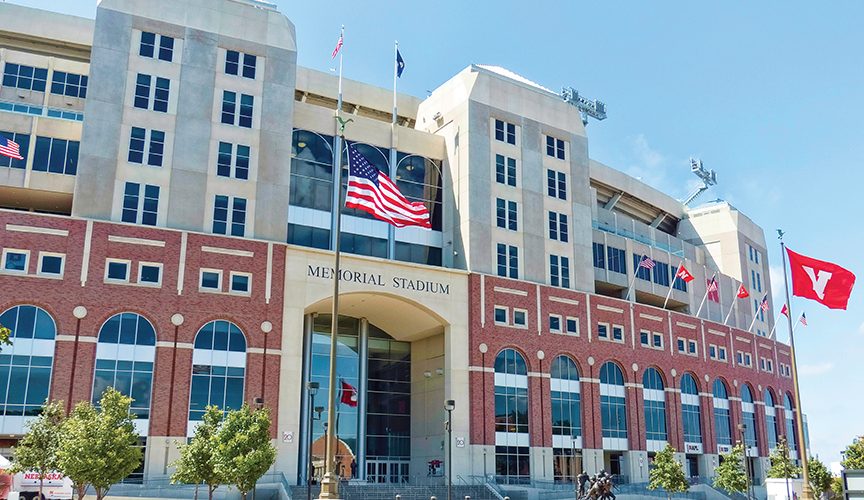 by Anne and Steve Teget

Each year, about 30,000 people tour Nebraska football’s Memorial Stadium, and you can be one of them. The University of Nebraska offers complimentary guided tours of the stadium on Wednesdays and Thursdays. To reserve a spot, call 402-472-3333.

Here’s what you should expect (and watch for) on a guided tour.

Parking is limited around the stadium, even on non-game days. You can park in a metered lot just south of the stadium or use a parking garage across the street from the West Stadium. Tours begin at the Traditions Lobby in the Osborne Athletic Complex in the North Stadium.

The No. 1 photo op on campus is the Legacy Statue on the east side of the stadium outside Gate 20. Created by artist Fred Hoppe, it commemorates Nebraska’s five national championships and portrays five Husker defensive players tackling a ball carrier.

Inside the lobby, you’ll see a display with Nebraska’s five national championship trophies. The Huskers won NCAA Division I championships in 1970, 1971, 1994, 1995 and 1997. The four most recent trophies include footballs made from Waterford Crystal.

More than one Heisman

Be sure to look for the world’s longest telegram on display in the Traditions Lobby.

At the conclusion of the 1970 season, 46,500 people paid $1 each to help send a short message to the team at its bowl game in Florida. Each participant signed his or her name to the telegram, and what resulted was the longest telegram in history being delivered to the Nebraska locker room shortly before kickoff. The telegram message itself was just three words: “Good luck, Cornhuskers.”

Etched over the stadium doors on the east side you’ll find the words, “Through these gates pass the greatest fans in college football.”

In the Traditions Lobby, there’s a huge mural dedicated to the fans who hold the record for the longest sellout streak in college football. Husker faithful have purchased every single ticket to every single game since 1962.

Before every game, players and coaches alike reach up and touch a horseshoe for good luck.

Since the 1930s, it has been a part of every game day, moving to a place near each locker room the team has had over the years. It even travels with the team to road games.

What else you’ll see on a guided tour

Weight room (but through glass doors). Former Husker All-American Ndamukong Suh gave $2 million to help build a state-of-the-art weight room for Husker football. Take a peek inside and see how far the strength and conditioning program has come.

The hallways. Take some time and look at the photos of past team captains, see the all-time statistical leaders in a variety of categories and take in the paintings of Nebraska Football’s consensus All-Americans.

Tunnel walk videos. As a part of the visit, you’ll stop in a small theater and take in a film of a pregame tunnel walk.

Tunnel walk/field/practice facilities. These stops
are included on a guided tour of Memorial Stadium in Lincoln unless there is practice or an event
taking place.

Editor’s Note: Postcard Jar is a food and travel blog created by Nebraskans Steve and Ann Teget. This empty nest couple writes about extraordinary travel for everyday people. They write about a variety of topics including road trips through the Midwest, cruising, and international travel and foodie experiences. You can follow all their adventures on social media @postcardjar or visit their website at www.postcardjar.com.