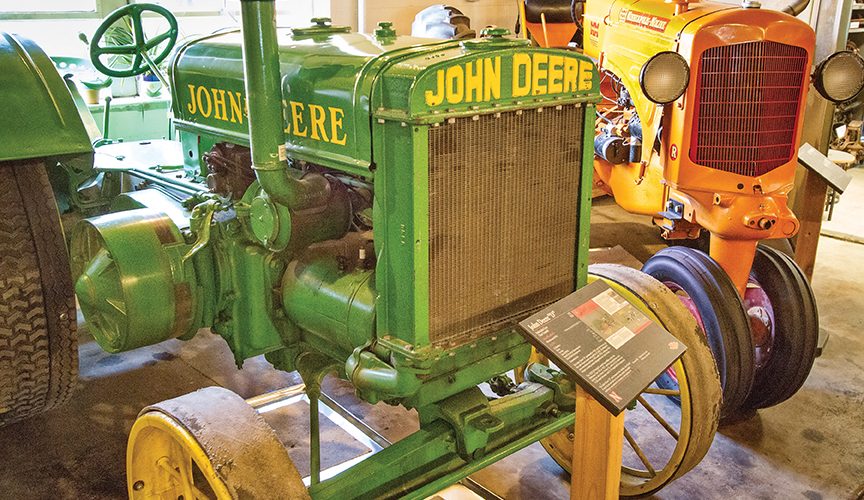 More than a city surrounded by cornfields or famed as the home of
Nebraska Cornhusker football, Lincoln offers a variety of unique museums, architectural tours, nature centers, gardens and parks. Whether you are new to town or just here for vacation, Lincoln has plenty of attractions for both kids and adults. Here are a few sights worthy of a visit.

A top-notch natural history museum, the University of Nebraska State Museum is located on the UNL campus. Visitors are greeted at the entrance by a 5,000 lb. life-sized bronze replica of a mammoth known affectionately as Archie (a nickname taken from its original Latin name (Archidiskidon imperator maibeni). Archie was installed in 2006 as a tribute to the museum’s Elephant Hall, housing the world’s premier collection of preserved mammoth, mastodon and four-tusker skeletons, tracing the 10,000 year history of elephant forebears that once roamed the central United States. Stunning murals by Mark Marcuson highlight this collection.

One of several interactive exhibits, theTree of Lifeillustrates 3.5 billion years of earth’s evolutionary history. With the swipe of a fingertip, users can travel through the phylogenetic tree to understand how all life on earth shares common ancestry.

The Hall of Nebraska Wildlife features 16 dioramas and interactive exhibits providing a look into the sights and sounds of Nebraska wildlife from meadowlarks to bison. Other permanent exhibits explore the First Peoples of the Plains’ cultural traditions both past and present. Weapons Throughout Timeillustrates the development of hunting, fighting and ceremonial weapons throughout history. The Mesozoic Gallery explores the Age of Dinosaurs, featuring Nebraska fossils of ancient sea giants. Interactive exhibits allow visitors to enter a dig site and view the processes of paleontology. An $11.4 million transformation of Morrill Hall’s fourth floor of is almost complete. It will include state-of-the-art exhibits including a five-foot digital projection globe.

Every third Sunday each month, Sunday with a Scientist brings a different topic to Morrill Hall that families can enjoy. An interactive playroom features a ‘dig’ area where kids can explore how fossils are unearthed and buffalo hide, feathers and other animal-related objects invite kids to learn about the natural world.

Within the museum, Mueller Planetarium’s multimedia shows make use of a full dome projection system. Shows for a variety of ages are scheduled throughout the year. Though modest in size, visitors can immerse themselves in high-tech adventures in 360-degree space. The Planetarium was the seventh location in the world to adopt the Space Telescope Science Institute’s ViewSpace outreach program. As a direct computer link with STScI, the Planetarium was a pioneer in trial testing ViewSpace programming and its content. Visit www.museum.unl.edu for hours and details.

Located at Holmes Park in South Lincoln, Hyde Memorial is dedicated exclusively to public education and viewing. Staffed by volunteers, Hyde is the sole U.S. observatory built and furnished entirely by donations. Admission is free. Hyde is open every Saturday evening year-round and hosts an astronomy presentation for visitors. The website provides information on weather conditions, upcoming sky events, and the current stars and planets in view.  For seasonal times and program information: www.hydeobservatory.info.

Native Americans and explorers, fur-traders and homesteaders, farmers and patriots—all the Plains people—combine to tell the comprehensive story of this land at the Nebraska History Museum. Over 125,000 objects and documents make up its ever-growing collection. The Investigation Station leads young visitors into Nebraska’s past with exhibits to touch and feel in four permanent stations, including a Native American tipi, a one-quarter-scale prairie schooner, a Build-a-Town table and a 1920s auto-touring campsite. Visitors can examine historical documents, photographs, artifacts, and learn the wisdom of elders. Past exhibits have included Quilting for a Cause, (the story of Nebraska’s fundraising quilts), Pioneering Aviators from Flyover Country and Nebraska Cowboys: Lives, Legends & Legacies, and an exhibit on the first 10,000 years of Native American life on the Plains. The museum is located at 15th and P streets. Admission is free. Learn more at www.nebraskahistory.org/sites/mnh/index.htm.

Designed by Bertram Goodhue, and a decade in the making, the “tower of the plains” was constructed between 1922 and 1932. Its 400-foot monolith is visible as far as 20 miles away. Topped by a nearly 20 foot bronze figure, The Sower, this spectacular building is well worth a long visit. The striking interior is rich in detailed motifs and employs an immense variety of materials, from mosaic and gold and richly colored tiles to solid walnut and a myriad of inlaid woods, carved limestone, and painted murals. Laden with allegory and themes taken from agriculture, history, and the First Peoples, the capitol was the first to break the federal-style mold and include symbolic motifs in every facet of the building, and is recognized by architects as the nation’s first truly vernacular state capitol building. Free guided tours begin each hour from 8:00 to 5:00 on weekdays, Saturdays at 10:00-5:00 and Sundays 1:00-5:00. Get more information at www.capitol.org. See our story on page 8.

South of the state capitol, tucked behind a tall wrought iron fence, this neoclassical brick building is the second residence of Nebraska’s governors. The first, a large house immediately east, served from 1899 until the current building was constructed in 1956. Guided tours feature mementos of governors past, and a charming doll collection replicating Nebraska’s First Ladies in their inaugural gowns. Call 402-471-3466 for more information. For a preview, view a virtual tour at www.governorsresidence.ne.gov.

Located near the capitol at 17th and H streets, the Thomas P. Kennard House is the oldest surviving building in the city. Built in the elaborate Italianate style in 1869, Nebraska’s first Secretary of State hoped its architecture would inspire faith in the new city of Lincoln. After its sale in 1887, the house served as fraternity/sorority house, boarding house, private boys’ home and single-family residence. The house was founded as a museum in 1965, when it was designated a Nebraska Statehood Memorial and entered the National Register of Historic Places in 1969. Period furniture and mementos offer an interesting perspective on Nebraska’s history. Open by appointment only. Visit www.nebraskahistory.org/sites/kennard/index.htm for details.

“Here in the heartland of the United States is the very best racing museum in the country,” says Automobile Magazine. This unique museum was founded in 1992 by “Speedy” Bill and Joyce Smith, and the collection is dedicated to preserving and interpreting the growth of racing and record-breaking speed engines that drove automotive history. This three-story museum displays racing autos but also traces the history of the innovative parts and elements of the fastest engines ever made. This unusual collection results from the Smiths’ six decades of personal passion for racing and hot rodding. Visit this museum at 2:00 p.m. Monday through Friday (May through September) for a guided tour of this impressive collection of historic automotive artifacts and vehicles. For more information, see www.museumofamericanspeed.com.

Built in the early 1900s on a hilltop that provided a “fair view” of the Capitol and surrounding farmland, this historic home is well worth visiting. Former U.S. Secretary of State, two-term congressman and three-time Democratic presidential candidate, William Jennings Bryant is best known for his hard-earned triumph vs. famed Clarence Darrow as the prosecutor in the notorious Scopes’ Monkey Trial, which challenged a Tennessee law that forebade teaching evolution. Science lost, Bryan won, but died a few days later.

Now part of the Bryan East Hospital Campus on the southeast corner (Sumner near 50th) Bryan’s residence has been restored to its early 1900s grandeur and its lower level museum offers historical recordings and exhibits.

Tours can be scheduled at (402) 481-3032 at least 48 hours in advance. Fairview is closed for all major holidays and often the day prior and after.

Small but mighty, odd and charming, the National Museum of Roller Skating houses the largest collection of roller skates and roller skating memorabilia in the world, including a gas-powered skate. Featured in Smithsonianmagazine as a unique tribute to roller sports, interactive exhibits include How to Build a Roller Skateand Evolution of the Wheel. For more information, visit www.rollerskatingmuseum.com.

The Tractor Test and Power Museum on UNL’s East Campus is a must-see for agriculture buffs, engineers and future farmers. The museum, located inside the first tractor test laboratory in the world, tells the story of tractor testing in Nebraska, which continues to this day. The museum’s holdings include examples of tractors tested between 1919 and 1980, an original test car, a dynamometer, and a children’s area with a large tractor cab for climbing. Tractor testing is unique to Nebraska and the story the Larsen Tractor Test & Power Museum is unlike any other in the country. Visit tractormuseum.unl.edu for details.

The American Historical Society of Germans from Russia Museum celebrates the 19th century immigration of Germans from Russia. Originally recruited from Germany with the promise of greater freedoms, changes in politics and other hardships led the population to emigrate from Russia, settling in agricultural areas. Once settled, they became an integral part of Lincoln’s community. As international headquarters for the Society of Germans from Russia, the museum includes a library, genealogical archives and special displays. Buildings within the city block area are a part of the museum, including two houses furnished as common homes of early 1900s. Visit www.ahsgr.org for more information.

The perfect outing for the entire family, this beautifully landscaped zoo is home to over 40 endangered animals, including the Humboldt penguin and snow leopard. Its mission has always been to offer children firsthand learning by interaction with living things, and to pursue saving endangered animals. The variety of creatures in this user-friendly zoo is impressive: white-handed gibbons, a fossa, dromedaries, a tree wallaby, and many smaller mammals and reptiles. Close encounters are easy in the zoo’s butterfly house, accessible aviary, and paths where peacocks roam the grounds.

In 2019, the zoo becomes a year-round attraction with the addition of indoor space. Four new areas premier in the expansion: a giraffe feeding experience, an up-close tiger encounter, a plaza with a splash stream and an indoor treehouse where visitors can climb with spider monkeys.

Get details at www.lincolnchildrenszoo.org and see our story on page 53.

Frequently lauded as the best children’s museum in the Midwest, the Lincoln Children’s Museum offers exploration, sparks imagination and encourages discovery—but it’s mostly geared for play! Children can become a newscaster, a veterinarian, firefighter, truck driver, grocer, explore aeronautics in a real plane or simulated spaceship. (Uniforms and costumes provided.) A stage on the lower level has a makeup table, lights and curtain and costumes for the budding performer in your family. A huge water table and interactive hot air balloon fascinate young scientists, and a child-sized prairie dog village allows kids to explore animal life. A toddler area with toys is available for the littlest, and art activities are offered throughout the day. The three-floor museum is loads of fun for parents as well. Call 402-477-4000 or visit www.lincolnchildrensmuseum.org.