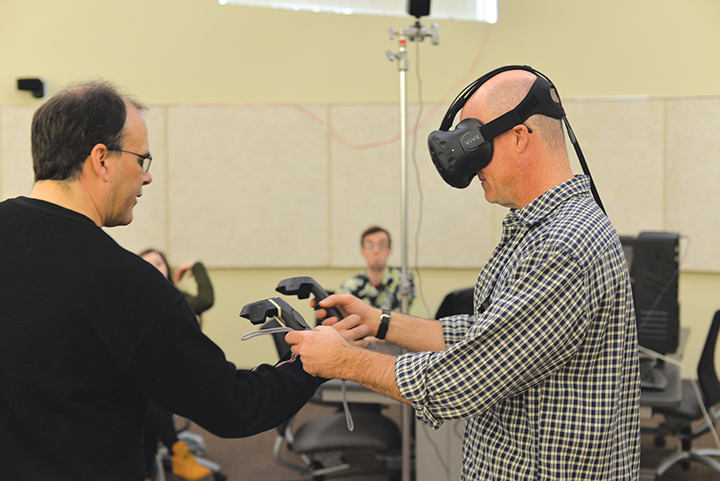 “Some of the most exciting developments in film and emerging media today reside at their boundaries, where cinematic narrative and storytelling intersects with science, the humanities, computer science, engineering, music, fine arts and other disciplines. Exploring these intersections is the mission of the Johnny Carson Center for Emerging Media Arts.”

Looking towards the future, the Johnny Carson Foundation and the University of Nebraska have partnered to develop the Johnny Carson Center for Emerging Media Arts. The Carson Center is “an exciting new program that creatively fuses virtual production with performative experiences across film; theatre and live stage performance; gaming, interactive media; broadcast and internet media; and augmented and virtual reality,” according to the Hixson-Lied College of Fine and Performing Arts where the Carson Center is housed.

“Students will learn how to tell a story in any media existing now or in the future. They will know how to recognize the potential that emerging media offer across an array of professional fields and be able to discern new technologies as they develop. They will also become familiar with interdisciplinary skills in a variety of virtual production, art and design, and computational processes, as well as entrepreneurship and business.”

The Carson Center’s Founding Director is Megan Elliott. From 2015-2016, Elliott served as the manager of Leadership and Community Connections at the University of Technology Sydney, Australia’s number one young university, where she led an international program for students to develop leadership and entrepreneurial skills, as well as instilling a commitment to innovation, social justice, community building and sustainability. Elliott has deep ties to emerging media industries across Asia, Europe and the world. She served as co-founder and director of China Creative Industries Exchange in Beijing and Shanghai, China, from 2007-2015.

From 2005 to 2015, Elliott was the director/chief executive officer for X Media Lab (XML), an internationally acclaimed digital media think-tank and creative workshop for the creative industries that she co-founded with Brendan Harkin. XML creates a meeting place uniquely designed to assist companies and people to bring their own creative ideas successfully to market. Some of XML’s partners include the Sydney Film Festival, Beijing Film Academy, Federation of Indian Chambers of Commerce and Industry in India, the national broadcaster (NPO) in Amsterdam, the American Film Institute, Digital Hollywood and 5D Global in Hollywood, the British Council, and the Federal Office of Culture in Switzerland.

Elliott and Harkin were recently chosen as two of five people to have their oral histories recorded for the National Film and Sound Archive in Australia, as two people pivotal to the development of the interactive media arts industries. She also served from 2002-2006 as the executive director of the Australian Writer’s Guild. Originally from Australia, Elliott received her bachelor’s degree from the University of Canberra in Bruce, Australia.

“Some of the most exciting developments in film and emerging media today reside at their boundaries, where cinematic narrative and storytelling intersects with science, the humanities, computer science, engineering, music, fine arts and other disciplines. Exploring these intersections is the mission of the Johnny Carson Center for Emerging Media Arts.”

The newly-formed Advisory Board features international leaders and innovators in new media who will offer their advice and expertise. Members of the board are leaders in the worlds of science, technology, virtual reality, interactive storytelling, architecture, cinema, graphic design, advertising and entrepreneurship. They make their homes in Australia, China and the United Kingdom as well as the United States.

A new curriculum is in the process of being built for a Bachelor of Fine Arts in Emerging Media and a new facility based in the former Nebraska Bookstore building at 13th & Q streets is being developed. It will house instructional space and equipment needed to teach cinema and virtual production including sound stages, a performance capture lab, classrooms, design and editing labs, computer labs, a seminar and screening room and other specialized spaces. The facility is slated to open in the fall of 2019.

Johnny Carson grew up in Norfolk, Nebraska and graduated from the University of Nebraska in 1947. The Johnny Carson Foundation has gifted $33 million in philanthropic support including a $5.3 million dollar gift in 2004 to renovate and expand the Temple Building and to create an endowment to keep performance spaces current with the latest in sound and lighting technologies. An additional $5 million gift in 2005 created an endowment to support program in theatre, film and broadcasting. More than $2.5 million donated beginning in 2011 created the Johnny Carson Opportunity Scholarship Fund and the most recent gift of $20 million in 2015 is the basis for the creation of the Johnny Carson Center for Emerging Media Arts.